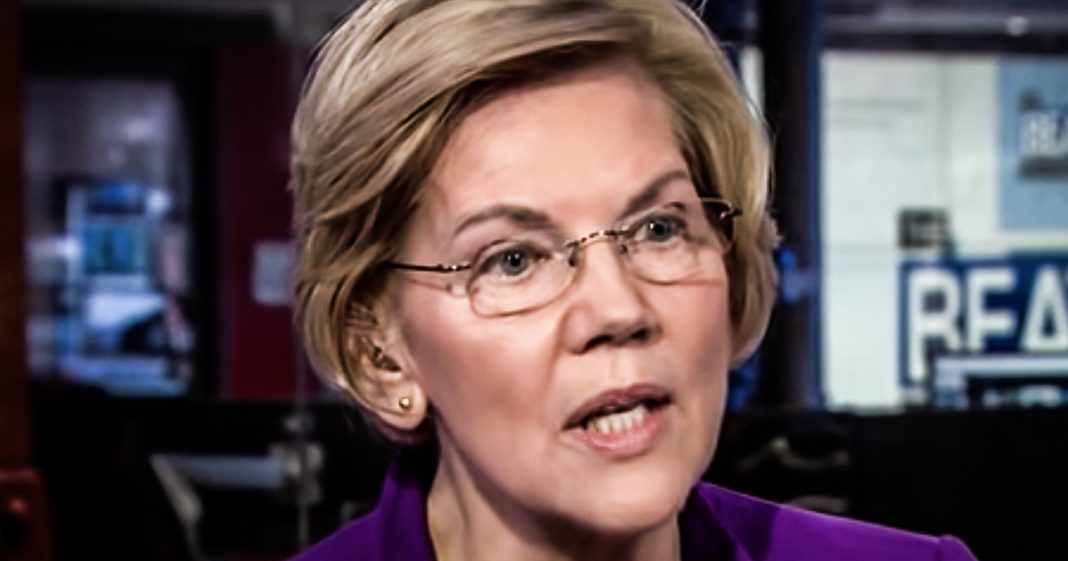 Elizabeth Warren has a plan for everything it seems, and the climate plan that she announced this week might be the most ambitious plan that she’s put forward. The plan would create jobs, boost the economy, and most importantly, help put America on the track to become a fossil fuel-free country. This plan shows why primaries are important, and it shows just how little we’re getting from a majority of the other Democratic candidates. Ring of Fire’s Farron Cousins discusses this.

Yeah, I might be showing my age a little bit here, but I remember when the iPhone first came out. Uh, you know, first couple of years of it. Really all the commercials would be, there’s an app for that. Oh, I want to do with that. There’s an app for that. I, we all remembered there’s an app for that. We need to amend that phrase and the phrase needs to be amended to say, Elizabeth Warren has a plan for that because that is what Elizabeth Warren’s campaign for president has been about from day one. Oh, she’s identified a problem over here. I wonder how, Oh, crap. While she already has a plan for that, holy crap. That was fast. It’s like that with every single issue. Elizabeth Warren has a plan for that, and I love it because that is what a Democratic primary hell, any primary, really, that’s what the primary supposed to be about.

Right? The Battle of ideas. But if you don’t give us any plans, you’re really not participating in the battle of ideals. And you’re over here in the battle of bell vague platitudes, which is where too many Democratic presidential candidates are. You got Beto, Biden, Buttigieg. All of them are over here fighting for platitudes while people like Elizabeth Warren and Bernie Sanders, they’re actually over here talking about ideas. But this week Elizabeth Warren came out with what may be her most ambitious and best plan to date, and it is her $2 trillion plan to save the planet and help boost theU s economy. Like it’s never been boosted before. Now, before I get into the specifics of her plan, let me go ahead and say something about what this plan does. She wants the $2 trillion investment over 10 years and part of it’s going to be for manufacturing green technology for the US to export all over the planet.

That is going to be a $26 trillion industry according to analysts. So we invest 2 trillion, but we could take at least half of that $26 trillion if not more, a market that’s about to open up. So we would make a huge profit off of that. But the reason I like this, and again, not even getting into the specifics yet, but the reason this is such a good idea is because she’s finally tying, or a politician, I want to say her. She’s finally doing it. Politicians are finally tying climate change to the economy. Now, believe it or not, folks, back in 2015, Hillary Clinton tried to do the same thing. My name was on, uh, October of 2015. I remember I did a lot of stories on it at the time cause I loved the plan. She came up with a $30 billion plan to take coal miners and coal mining states, retrain them to work in a green technology field. You know, get ’em out of the coal mines. Instead, we’re going to have you building solar panels, cleaner, better work. I think it was only two months. Two months later she came back out and said, yeah, you know what? I don’t even like my own plan. I’m not gonna do that anymore. And that was one of the big things that really soured me on Hillary Clinton. I don’t think we’d be looking at the same thing with Elizabeth Warren here. She understands that, guess what folks we’re running out of time. We are running at a time and other horrible new report came out this week saying that entire civilizations could, could potentially start collapsing by 2050 we are out of time.

Okay, but Elizabeth Warren wants to get to work right now fixing the problem and she could and we could as a country, as a people, as a species, fix this problem before it hits those horrible bad points. And as her plan points out, we can actually put a hell of a lot of people to work and make a hell of a lot of money doing it. It is a win win, no downsides whatsoever kind of plan. And those are the best plans because it’s really difficult for anyone to come up and say, well I don’t like this. It costs too much money. Okay, well it could make us $15 trillion. It could prevent death. It could prevent the entire destruction of the planet. What? What part of that do you not like? Do you not like profits? Do you not like life? I love this plan. Here it is.

The three main parts, the Green Apollo program would commit 400 billion in funding over the next 10 years for the clean energy research and development. More than 10 times what we’ve invested in the last 10 years, the green industrial mobilization would involve a one point $5 trillion federal procurement commitment over the next 10 years to purchase American made clean, renewable and emission free energy products for federal, state, and local use. And for export. The Green Marshall Plan would include it, the creation of a new federal office dedicated to selling American made clean, renewable and emission free energy technology abroad, and a $100 billion commitment to assist in countries to purchase and deploy this technology. So basically what we’re looking at here is the United States could become the leader that we should have become 20 years ago. We can put our people to work, get them out of the oil fields, get them out of the oil rigs, get them out of the coal mines and put them to work, retrain them with this government money, put them to work, building windmills, put them to work, building solar panels, put them to work building battery and creating an infrastructure that can handle the new renewable energy economy.

And eventually, yes, get us to zero carbon emissions and again, make a hell of a lot of money doing it. What this plan covers all the things that Republicans and climate deniers usually tell us. We can’t act on climate change because of the bad things that we’ll do. Will this plan the gates, all of that? Oh, people are gonna use their jobs. Well guess what? It’s going to actually create millions more. And the first to get those jobs are going to be the people who lose their jobs because we’re no longer using coal or oil for fuel.

Nobody goes out of work. And we ended up creating a net of jobs, not a net loss in net gain. Everybody just gets retrained. But we’ve got to make the investment to do it, but the investment will pay off once we start exporting these products all over the globe. This plan is a win, win, win, win, kind of a plan. And this is exactly what we need to hear from every single person running for president. If you do not have a climate plan as ambitious as Elizabeth Warren’s, then don’t even waste my time.