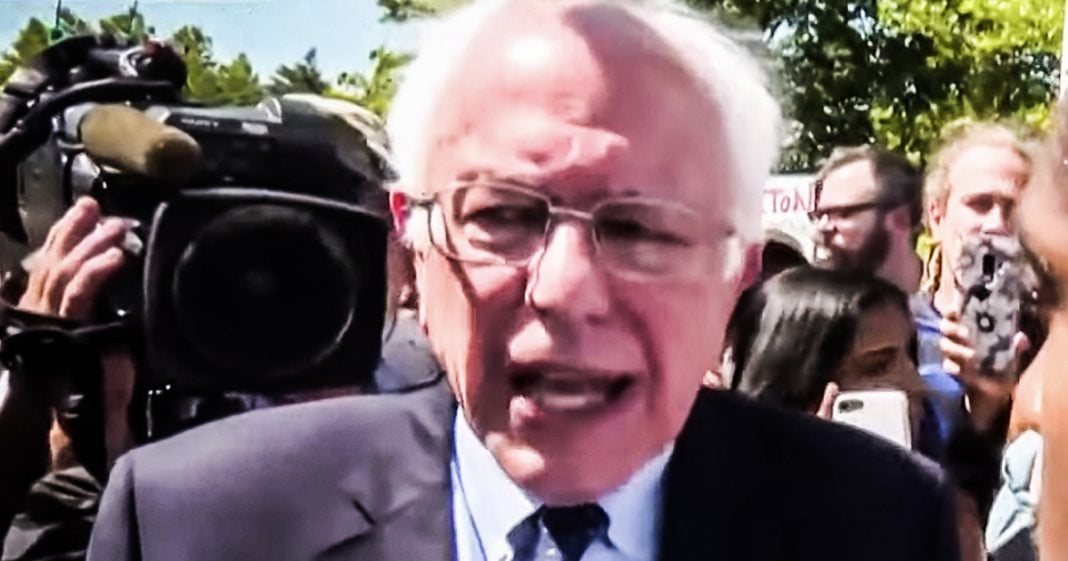 During a Walmart shareholder meeting this week, Senator and presidential hopeful Bernie Sanders stood up and told the executives of the company TO THEIR FACES that they had to start paying their workers a living wage. This is the level of courage that we need to see from a person who wants to be president, and Bernie never flinched or faltered. This is leadership on a crucial issue, and other candidates need to get this tough or get out of the way. Ring of Fire’s Farron Cousins discusses this.

One of the most frustrating thing about politics and covering campaigns and you know, you see these candidates both left and right. They go out there, they give these amazing speeches and they say, we’re not going to let so and so push you around. You know, maybe that’s so and so in Donald Trump’s case is China for the Democrats. Maybe it’s a corporation, maybe it’s a Walmart, maybe it’s a best buy. Maybe it’s Wall Street. But they get up on those stages and they tell us we’re gonna fight back.

But then every time, once they get into power, they’re like, ah, well, you know, we’ve looked at a little more, I don’t know. We can do this. Uh, yeah. Then we’ll have some kind of compromise here and may you may a slap on the wrist, a little fine. They can ride off. It’s very, very different. Obviously when these candidates get face to face with these executives that they promised us they were going to hold accountable, except for this week, this week, we saw what leadership looks like. We saw a politician refuse to stand down when he was looking into the eyes of one of the greediest corporations in this country. That person was Bernie Sanders and that company was Walmart.

On Wednesday, Bernie Sanders attended the annual shareholder meeting of Walmart. He was the invited guest of the workers, so we stood there in that meeting, stood up looking into the faces of the executives and the shareholders, the people who run this country, the multimillionaires who are screwing over their workers. He said a lot of things that were super powerful, but this is the one that stood out to me the most. He said, frankly, the American people are sick and tired of subsidizing the greed of some of the largest and most profitable corporations in this country. That is what he said before. He told the company, you have to stop paying these starvation wages to your employees. You have to pay them a living wage of at least $15 an hour. Now, Walmart executives quickly dismissed this. They didn’t care, but Bernie Sanders didn’t back down. Bernie Sanders didn’t flinch. He stood up and he looked them in the eyes and he told them this. He said, you’re greedy. He said, you gotta pay better wages. You’re treating your employees like crap while you’re pocketing tens of millions of dollars every single year you make in one hour. Executives what the average Walmart employee makes any single year do better. be better.

Immediately following the shareholders’ meeting, Bernie Sanders went outside to a rally with the workers to continue their protest for wages. And this is what he had to say. While out there at the rally, one might think that a family worth 175 billion would be able to pay its employees a living wage. And yet, as you all know, the starting wage at Walmart now is $11 an hour and people cannot make it on $11 an hour. You can’t pay rent, you can’t get healthcare. You can’t feed your kid or put gas in the car on $11 an hour. So all we are saying to the Walton family and Walmart, pay your workers a living wage. There’s a lot of critics and Bernie Sanders out there who somehow think that Bernie Sanders is only in this for himself. He’s only running cause he got a huge ego that he wants to feed. Let me tell you what we saw this week. We saw a man who’s unwilling to back down in the same room, face to face with the very people he is vilified for years. He, he didn’t get all clammy. He didn’t say, Hey, we need to have a talk and maybe you know, work out some co no. He flat out looked him in the eye and said, this is what you’ve got to do.

How many other people running for president on the democratic side right now would have the courage to do that? Maybe. Maybe one of them, maybe two maybe too, besides Bernie. And that’s it. He showed us what a leader looks like this, this week he showed us what somebody who actually gives a damn about the American public and their struggles, what they look like.

And so my message is this to every other person running for president under the democratic banner right now, if you don’t have this level of courage, if you aren’t willing to look at the CEOs in the face and tell them they’re wrong and greedy and need the change, if you don’t have the courage to do that, to do what Bernie Sanders did, than I advise you to get the hell out of the way because this election isn’t for you.