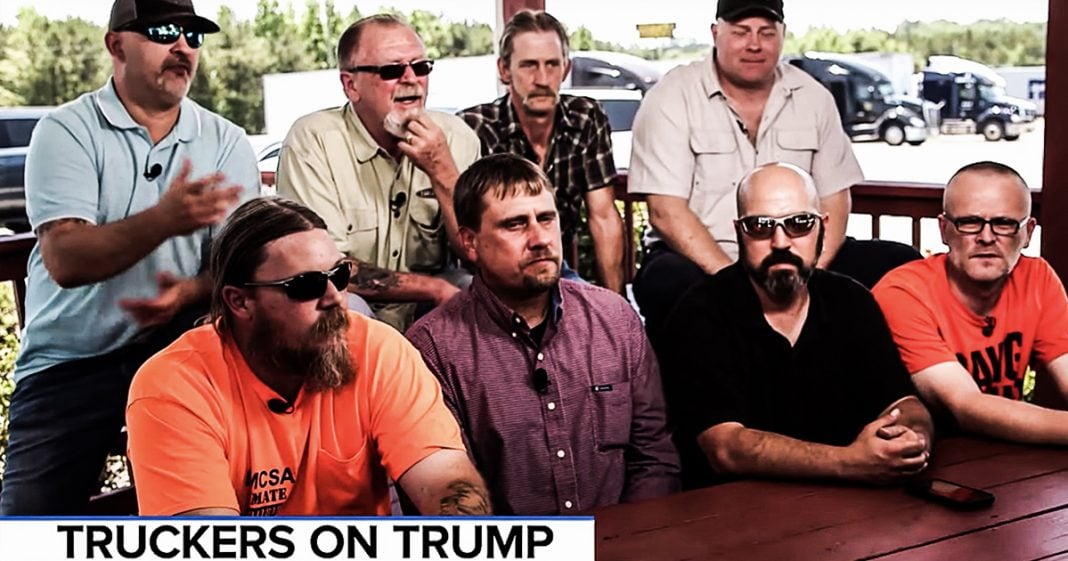 MSNBC recently spoke to a group of professional truckers, many of whom were Trump voters in 2016, and they all had one common thing to say about the President – He hasn’t kept his campaign promises. They are angry about the fact that they didn’t get a tax cut like they were promised, and instead watched their taxes climb. They are being hurt by his trade wars, and they say that the economy isn’t working better for THEM. And that’s the point we have to hit home for voters in 2020, as Ring of Fire’s Farron Cousins explains.

Earlier this week, MSNBC assembled a panel that they interviewed. The panel was made up of truck drivers here in the United States, most of whom actually voted for Donald Trump in the 2016 election. And the common theme that literally every one of them had was that their lives are actually worse now, thanks to Donald Trump and the Republicans and the Donald Trump did not keep his campaign promises to them. For starters, this group of truckers is angry about the fact that they were promised lavish tax cuts, but instead all of the savings went to the people at the top of the economic food chain and instead, as one of these truckers pointed out, his taxes Rose Rose by $8,000 per year. Everyone else on that panel also said my taxes also went up because specifically written into the tax code. We’re a, I don’t want to say a repealing, but they got rid of certain tax cuts for middle class workers.

And as you get more specific, those tax cuts that were repealed, benefits, rebates, write-offs, whatever, target specific industries, they had some that targeted teachers, they can’t write off the cost of, uh, equipment and supplies for their classes anymore. Truckers can’t write off their per diem anymore. And that’s why every single person in that room being interviewed by MSNBC said, my taxes went up. They’ve said that Trump is not repealing any of the regulations that they feel are harmful to them. He’s only repealing regulations that benefit again, the top 1% and they’re correct. Now they were kind of complaining about the Obama regulations that he put on them, which they were put on truck drivers to dramatically reduce the number of trucking fatalities in this country. You know, I don’t know if you’re aware of this, but there is actually a whole subsection of legal services devoted only to people who have been injured by 18 wheelers and big trucks.

That’s how common that is. There is a whole cottage industry of lawyers who specialize only in that, and I can tell you most of the time it’s not the truck driver’s fault. Yes, they were tired. They were drowsy. They fell asleep at the wheel. But they did that because corporations forced them to work overtime, did not let them get legally required sleep. Obama administration came along, put those requirements in place so you can’t drive more than a, you know, 10 hours or so without taking a 10 hour break. I forget what the exact numbers are, but it’s something like that. Nonetheless, the drivers, I guess, wanted those regulations repealed may be because they like getting in car accidents. But the bottom line is this. They all said the same thing. I’m not going to vote for him again because he lied to us. I’m not any better than I was four years ago.

Even though he keeps telling us that the economy is doing better than ever. And that right there snippet, memorize it, repeat it. That is what Democratic presidential candidates need to do. Cause we know Donald Trump’s gonna run on how great the economy is. How great his tax cut was. And people out there in this country may say, well, things aren’t better for me, but I, I guess if he says it’s better, I mean the numbers look better on the surface. Everything does look better. So maybe I’ll just vote for him again. Reframe the question, reframe their talking point. Is the economy working better for you?

Don’t worry about your neighbor right now. Don’t worry about the overall for you. Is your personal financial situation better than it was four years ago? Trump told you it would be, he said you would be getting between a 4,000 and $9,000 tax rebate from his tax cut. That’s how much extra money you would have in your pocket or on any given year. That’s a lie. But he promised you, you, every one of you specifically, you’re going to make more money under me. So when he goes out there and says, this economy is doing better, I want Democrats to counter that by saying, but isn’t doing better for you? Or is it doing better for the CEO of Walmart? Is it doing better for Jeff Bezos? Because we know the answer to that.And this little panel that’s a MSNBC did proves that a lot of voters out in this country understand it too. Yeah. The economy may for the moment, be technically on paper doing better, but when you drill down to it and start asking individuals, the economy is not doing better for average American citizens. And that’s the point the Democrats have to drive home if they want to beat Trump in 2020.