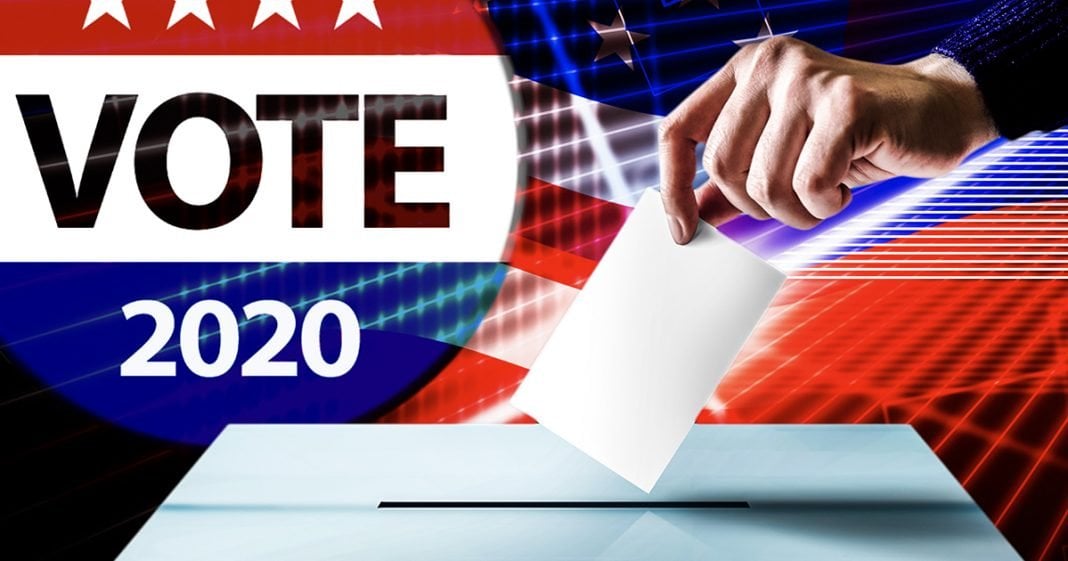 Donald Trump’s reelection campaign seems to understand that the President is facing an enormous uphill battle in 2020, so they’ve decided to focus the bulk of their efforts on winning states that the President lost in 2016, particularly Nevada, New Mexico, and New Hampshire. Without those electoral votes, his campaign believes that they do not have a path to victory, and they are likely correct. But considering the damage that Trump has done to so many states across the country, will the math ever get him to his goal? Ring of Fire’s Farron Cousins discusses this.

Donald Trump’s 2020 reelection campaign understands that this man is facing a very tough path to victory in 2020 now, specifically the three states that Donald Trump was originally going to try to target, where Michigan, Wisconsin, and Pennsylvania, you know, some of those Midwest, uh, which Pennsylvania’s not really Midwest yet. For some reason they classify it as such, but nonetheless, he wanted to go to those states because they have the electoral votes needed to put him into the Oval Office again for another four years. They helped propel him in 2016 he thought for sure they do the same in 2020 but then came the trade wars, then came his decision to do nothing about the water crisis in Michigan. Those states don’t really like him and midterms in 2018 kind of prove that. So his campaign now has had to come up with a new strategy. They’re saying, we don’t think we’re going to win these states this time, so how are we going to get to that magic number of 270 electoral votes?

And they think they’ve got a plan. They’re going to go to New Hampshire, New Mexico, and Nevada, those three states, they think if they can flip those from blue to red, they’re totally gonna run away with the 2020 presidential election. Now, for those doing math at home, it’s important to understand that those three states do not have the same number of electoral votes as Pennsylvania, Wisconsin, and Michigan. So I’m a little little confused as to why they picked those three to substitute for the other three, which again, makes zero sense. But nonetheless, these are states that also got rid of Republicans in 2018 because the voters are so pissed off at the Republican Party at Donald Trump and everything that’s going on. And for some reason this campaign thinks, hey, you know, these states that really punish the GOP in 2018 those seem like good states for us to go hang out in.

I think we can win them, right? Uh, personally, honestly, I love the strategy. I encourage the Trump campaign to go full steam ahead. You need to go spend millions upon millions of millions of dollars up in New Hampshire over in, uh, Nevada. Yeah, you guys, totally. If you spend enough money, you’re going to win those states, and that actually may not be sarcasm. There’s a chance Donald Trump obviously could win some of those southern states. You’ve got to, or southwest states. You’ve got plenty of people down there who hate immigrants. Donald Trump hates immigrants. Hell, it’s a match made in heaven, right? So yeah, he stands a good chance of winning those. But New Hampshire know New Hampshire a little bit, a little bit conservative, but I don’t think that anything Trump has done personally has benefited anyone in the state of New Hampshire, other than members of top 1% who happened to live in that state.

So that’s also going to be a very tough sell. Not only that, but you also have to consider the fact that you have plenty of people running for president on the democratic side who are from the northeast and would likely capture New Hampshire is they are more familiar with those particular areas. The point of all of this obviously is not just the Trump says, oh, we’re going to get these three states right over here or we’re going to ignore these states because I screwed them up so bad. He’s not going to ignore any of them. And that’s actually one of the reasons he did so well in 2016 and why Hillary did not do so well. She ignored certain states that she had to win. Trump saw that and understood it. And as much as we may mock the president, we may mock his advisers and his, uh, people running his campaign.

They’re not as stupid as they come across. They do understand that there is a path to 270 electoral votes and they’re going to do what they have to do to take that path. If they think they can win Wisconsin, then there likely is a chance they could win Wisconsin. Same with Pennsylvania, Ohio, Michigan, Florida. They could and that’s the scary part. And unfortunately Trump is already out there occasionally going out and doing his rallies and building up his base for 2020 while the Democrats are still dealing with more and more people each week coming in and saying, I too would like to run for president. We got to start narrowing this field down so that these candidates, the top tier, the good ones can actually go out there and start campaigning from coast to coast and border to border. Because right now focusing on Iowa and just New Hampshire, that’s not doing much for people all over the rest of the country. The better candidates are already traveling and branching out from those particular states. That’s good. But Donald Trump has been doing that for months already building up as 2020 base. So Democrats, we need some of you, especially the five six, seven, eight of you polling below 1% how’s about you go ahead and drop out cause you know you have no chance so that the rest of these people stop having to fight for votes in Iowa and maybe they can go start fighting for votes in swing states that are actually going to determine the 2020 presidential election.