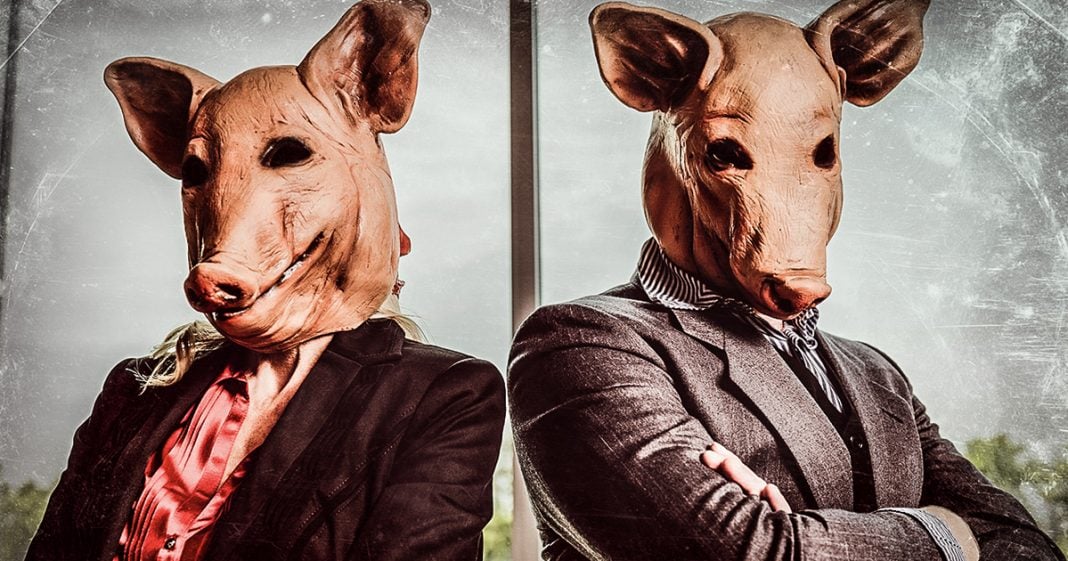 We’re continuously told that bold, life-changing and life-saving policies like Medicare for All and a Green New Deal are just too expensive for this country. But the truth is that the only form of socialism that is too expensive are the massive handouts and tax breaks that we give to corporations. According to a new report, corporations in the US pocketed an extra $91 billion last year because of the Republican tax scam, further starving our government of much-needed revenue. Ring of Fire’s Farron Cousins discusses this.

Folks, socialism is bad. At least some forms of socialism are just absolutely horrible and they’re, and they’re devastating to this country and we have to avoid them. But no, I’m not talking about things like free college or Medicare for all or even the green new deal. I’m talking about the kind of socialism that the federal government has in place for major corporations that is absolutely destroying our economy. Destroying our deficit.

And harming American workers. According to the latest numbers. Corporations in the United States paid 91 billion fewer dollars in 2018 than they did in 2017 and it was 100% because of the Republican tax cut $91 billion that would have gone to the federal government had Republicans not screwed up the tax code. But instead corporations got to put it back in their pockets. They got to use it to buy back their own stocks, which makes their shareholders even richer. They didn’t spend it on giving workers raises. They didn’t reinvest in their company. They didn’t expand their businesses, they didn’t innovate. They put the money in their pockets. Now that part is old news. We have talked about that time and time again, but the $91 billion reduction in taxes was something we did not yet know about til a few days ago. And if you think that’s bad, well, hey on your see hear folks, because not only did they pocket and extra 91 billion that they didn’t have to pay, but they got an additional 60 billion back in refunds. So quick math tells us 151 billion extra dollars in the pockets of major corporations in this country, 100% because of the Republican tax cut plan. Now the 91 billion that they didn’t have to pay represents the lowest amount of corporate taxes paid in this country since 1947 corporations haven’t paid that low of a tax rate since 1947 it was a 22% reduction from the year before and get this. The effective tax rates on corporations was not 21% as the Republican tax cut scam told us it would be, the effective tax rate on average was seven.

Okay, 7% because not only did their overall tax burden get reduced from 35 to 21 but that 21% is before you add in write offs and other little loopholes that they use. So the effective tax rate for corporations in this country was 7% lowest rate since 1947 folks. But Hey, average American citizens, we get, we got tax cuts, right? Actually, no, actually no, because the share of tax money paid by individuals, middle class, working class, underclass people that actually rose last year by $100 billion.

And corporations got an extra $91 billion. Huh? So we paid the extra hundred billion so that corporations could get almost a hundred billion back in their pockets. That’s what happened in 2018 folks, and I’ve said it before, and I’m going to say it again because this is an issue I’m going to talk about constantly. Every single person running for president on the democratic side of the aisle needs to talk about these numbers every single day. Every day. Go out there and tell them, you paid 100 billion more in taxes for corporations could put 91 billion back in their own pockets. How was that fair and what world is that fair?

Yeah, because by God we got to give corporations $151 billion a year just for being there. That is one of the worst, dumbest policies this country has ever come up with, with possibly the exception of endless war, but giving these handouts to multibillion dollar corporations who don’t need it whatsoever is definitely a close second.