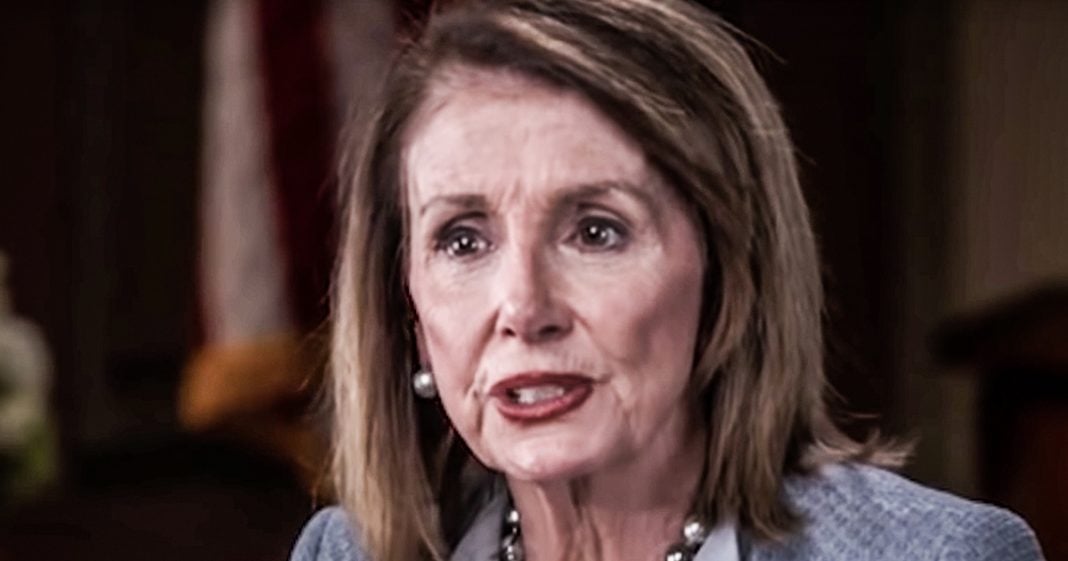 Nearly 30 liberal groups have signed onto a letter urging Speaker of the House Nancy Pelosi to stop playing politics and to begin an impeachment inquiry into Donald Trump right now. They are tired of hearing her excuses, as are a growing number of American citizens, and they want the lawless President to be held accountable for his actions, or at the very least, they want a full examination of the evidence. Ring of Fire’s Farron Cousins discusses this.

Progressive groups are getting sick and tired of Nancy Pelosi playing politics instead of moving forward with an impeachment inquiry and to Donald Trump’s actions. In fact, almost 30 progressive groups in the United States sent a letter to Pelosi earlier this week, telling her to stop screwing around, stop putting it off, show a little courage and start the impeachment inquiry. Now.

Yeah, here’s just a little snippet from the letter that they sent. And this is the one that stuck out to me the most, is the most powerful. It says, as speaker of the house, you have the power to ensure congress exercises its constitutional obligation to hold this president accountable. But instead of using your power, you’re giving us political excuses for why you shouldn’t instead of leading you and your colleagues have asked us to wait to wait for the Mueller report, wait for the unredacted Mueller report, wait for Mueller’s testimony, wait, uh, a testimony about the Mueller report. Wait for more investigations. Wait for bipartisan consensus, wait for impeachment to poll better. Wait for the 2020 election. And the reason that particular passage stuck out to me so much is because that’s what we’ve been hearing for weeks. Now let’s wait for x, y, and Z. Let’s wait for a few more dominoes to fall. Let’s wait for this. Let’s wait for that. Look. Impeachment is already polling better and you haven’t even done anything yet. Same thing happened with Richard Nixon by the way. Folks go look at the historical polling.

A majority of people didn’t want him impeached, but then as those inquiries increased, majority of people wanted him in peached. That’s what would happen here, or at the very least it would finally give us some clear answers, some clear closure into to this whole Donald Trump saga. Maybe, and I don’t believe this for a second, by the way, but maybe the man has done nothing wrong his entire life. Maybe there is nothing to impeach him for, but to be honest, if that’s the case, we should know about that so we can give up, move on and just deal with the fact that he’s a crappy person who’s sitting in the White House and we can’t remove him. That would actually be Cathartic for a lot of us. We could just move on and focus on defeating him.

But again, there there’s no chance in hell that’s the case, right? I mean, we already have 10 instances from Mueller himself of obstruction of justice. Uh, we have Michael Cohen testifying to Congress saying, Donald Trump committed bank fraud. You know, ted lieu was quick to jump on that. I know he would love to dig a little bit further in there, but he would need impeachment inquiries to begin before he would be able to do that. A lot of the better candidates running for President as Democrats have already called for impeachment inquiries to begin, but right now Nancy Pelosi is the gatekeeper and she told us has recently is just two days ago that this ain’t going to happen right now. Folks. Meanwhile, you’ve got Republican groups out there running ads saying the president should be impeached. Nancy Pelosi is pissing everybody off.

Here’s a few of the organizations that signed on to this letter. You have credo, indivisible, free speech for people, Climate Hawks vote, democracy for America, Justice Democrats in the march. For truth, the Women’s March, the Working Families Party total of 29 groups. You can find the full list in the link in the description of this video. These are great organizations. Their letter is incredibly powerful. Again, it’s at the link as well. I advise you to go through there and read it, not just because I want you to be on the impeachment bandwagon, but because they lay out show perfectly why Nancy Pelosi has become so ineffective. Why she is weak. That may not be their goal with this, but they absolutely spell it out right there for you.

And that’s the biggest problem we have. There was a lot of talk when Democrats retook the house should, she’d be the speaker and you had the establishment type saying, hell yes, she should. She was already speaker once. Let her do it again and a lot of people saying like, well, hold up. She had her time. We lost a little over a thousand seats across the country while she was basically the face of the Democratic Party. She was weak on this week, on that week, on this week on that. And maybe maybe go for somebody else. They said, hell no. You just hate women. We’re putting Pelosi in there. The people who said we should go for somebody else were correct. I know Nancy Pelosi had a great clap, but you know what? To Defeat Donald Trump, we’re going to need more than a Sassy clap to send him back to New York. Okay.