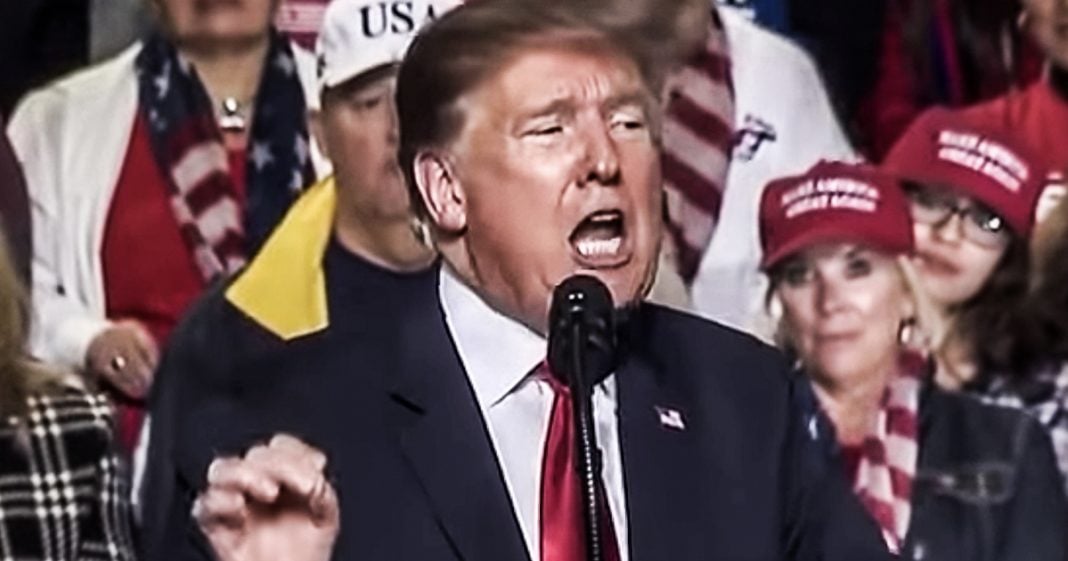 Donald Trump has always been notorious for not paying his bills, and reports of him stiffing contractors on projects are quite common. But even now that he’s president of the United States, he still seems to have an issue paying what he owes, and he’s currently stiffing the city of El Paso, Texas out of nearly half a million dollars for a recent hate-filled rally that he held in the city. Ring of Fire’s Farron Cousins discusses this.

Before he became president of the United States, there were no shortage of stories out there telling us the Donald Trump does not like to pay his bills. He stiffed contractors on hotel projects and condo projects. Even the Trump hotel right there in Washington DC. He ended up getting sued because he didn’t pay the plumber who installed most of the plumbing in the building. Donald Trump just doesn’t like to pay his bills. He’s actually being sued right now for not paying his tax bills down in Panama on the building that he, uh, had his name on before they scraped it off the front of it. Donald Trump doesn’t like to pay his bills. Well, because of Donald Trump’s dislike of paying bills, the city of El Paso, Texas, it’s kind of getting pissed off because the amount of money that he owes that city for a mega rally that he held back in April amounts to 63% of the city’s entire contingency budget.

Basically the man went down there to hold as rally, use the resources in the city and spent 63% of the city’s contingency budget to hold his little hate-filled anti-immigrant rally down there in El Paso, but he was supposed to pay it back. This is part of the agreement. This is what happens when candidates or politicians or whoever it is, if you want to go and give a speech somewhere, you’re not just renting out the, uh, arena. You got to pay for increased police. You’ve got to pay for extra for fire department. You got to have medical services available, which you have to pay for in case something happens in plenty of other fees that go along with it. It’s not just Trump, it’s everybody. Uh, Beto O’Rourke actually held an event in El Paso, but he actually paid his bill Trump almost two months later, still hasn’t paid his bill, and it’s almost half a million dollars.

Trump currently owes $470,417.05 to the city of El Paso, Texas. And here’s what a for, here’s the breakdown here from Salon, uh, $380,942.12 for police department use. That’s the bulk of the money. $60,630.84 for the fire department, $15,577.52 for the Sun Metro Department of Aviation. Uh, he owes $6,286.57 streets and maintenance, $6,452 and the health department, $528. Now the city has been forced after they ignored the first past due notice and invoice to send another past due notice saying if we do not get your money in 30 days in this and second notice was sent towards the end of May. If we don’t get your money in 30 days, we’re going to have to charge you 21% extra for late payment fee. Then you have Michael Glassner Trump campaigns. See, Oh, who said since 2015 the Trump campaign has held nearly 550 rallies all over the country and this invoice has roughly 10 times the amount that a locality generally asked to be reimbursed.

We are reviewing it, so he’s basically saying, hold up. You just charged us more than everybody else’s charged us ever. It’s so we’re going to take the time to review it. All right, bud. Well, you’ve had almost two months to review it. What’s left to review? They’ve itemized it for you right there. El Paso is not a tiny little city, okay? You owe the money. You agreed to this when you sign the documents saying we were coming to your city to hold a rally. I don’t care if it’s 10x more than what the other cities charge. I don’t care if it’s 100x more. You agreed to pay the costs, so pay the damn costs after all. Isn’t your boss a billionaire? You know, doesn’t he just have tons and tons and tons of money? Haven’t you guys charge tax payers millions of dollars just for secret service agents to watch the president? While he golfs. Don’t you think you guys could cough up $470,000 out of your own coffers to pay back a city that let you come in and hold your hate rally a few months ago? Honestly, I feel like that’s the least that you could do at this point.