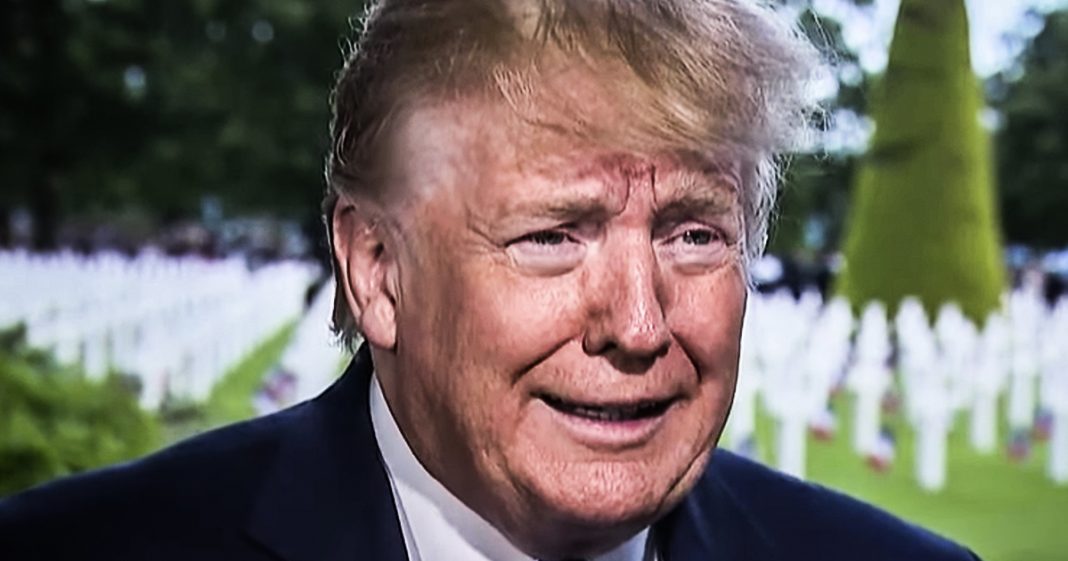 Earlier this week, House Speaker Nancy Pelosi said that she doesn’t want to see Donald Trump impeached, she wants to see him in prison. Trump obviously didn’t take too kindly to these remarks, and during a Fox News interview this week, he resorted to his childish name calling because he couldn’t come up with anything else. Ring of Fire’s Farron Cousins explains what’s happening.

Well, the kindergarten feud between house speaker, Nancy Pelosi and President Donald Trump got kicked up an extra notch this week after Nancy Pelosi said earlier in the week that she would rather see Donald Trump in prison than see him impeached. We’re Donald Trump. Obviously. He doesn’t want to hear that. He doesn’t want to hear Nancy Pelosi saying that he should be in prison show. On Thursday. He went on Laura Ingraham’s program and this is what he said. I actually don’t think she’s a talented person. Speaking of Pelosi, I’ve tried to be nice to her because I would have liked to have gotten some deals done. She’s incapable of doing deals. She’s a nasty, vindictive, horrible person, nasty, vindictive and horrible.

That is how Donald Trump described speaker of the house, Nancy Pelosi, any wonders why nobody wants to work with him. He wonders why the Democrats are having such a hard time coming to two deals with him, which actually that’s not even true. He is the one who has quite literally walked out of the deals that Democrats had been trying to make with him on vital things like infrastructure. He’s still out there lying about that saying Democrats don’t want to deal on infrastructure when he’s the asshole who actually walked out of the minutes a meeting after just three minutes. The president is a child, but we’ve known that. We’ve known that for a very long time. We knew that before this man ever ran for president.

Another issue here though is Nancy Pelosi herself. I do not think she’s nasty, vindictive or horrible. She’s not a great leader though, and I think if you disagree with that, then you haven’t been paying attention to her tenure as speaker of the house, both right now and how she was several years ago. Because here’s the thing she said she would rather see him in prison than see him impeached.

Hi, how are you going to work that out? How are you going to put them in prison if you don’t even bother going through the impeachment process, you know, discovery, finding documents, calling witnesses, getting testimony. Those are actually the kinds of things that would have to be done in order to put the man in prison. So what Nancy Pelosi is doing out there right now is a bit dishonest folks. She’s trying to throw a bone to the people in the Democratic Party. The voters who want this man impeached by saying, oh, wouldn’t it be better if this guy was just in prison rotting away? And people like, hell yeah, that’d be good. We like that. So then she doesn’t have to go forward with impeachment. She can say, listen, I placated them. I said he should be in prison. We’re good to go. Only we’re not good to go. Donald Trump is on national television calling the speaker of the house. A nasty, vindictive, horrible person.

The entire world gets to see that. That’s dangerous. It’s, and it’s demeaning for everybody in this country especially Nancy Pelosi. I do not believe that she is playing a long game here. I do not believe that she is playing three dimensional chess and I certainly do not approve of the president’s language used to describe her. I don’t hate Nancy Pelosi. Let’s get that out of the way right now. I don’t hate her, and I do not think that she deserves to be treated the way the president is treating her, but in terms of being a good leader, or at least the leader that the Democratic Party needs right now, she’s not it. She is absolutely 100% not the leader that we need, but we’re stuck with her for the time being. We’re stuck with Donald Trump, and unfortunately she is the one who might be able to help us not be stuck with Donald Trump, but unfortunately, she’s a little too timid right now to actually do it. She would rather give us these, you know, vacuous talking points of, wouldn’t it be awesome if he was in jail? She would rather say things like that and then let the president go after her on national television than actually doing something about it and exposing this man for what he truly is.