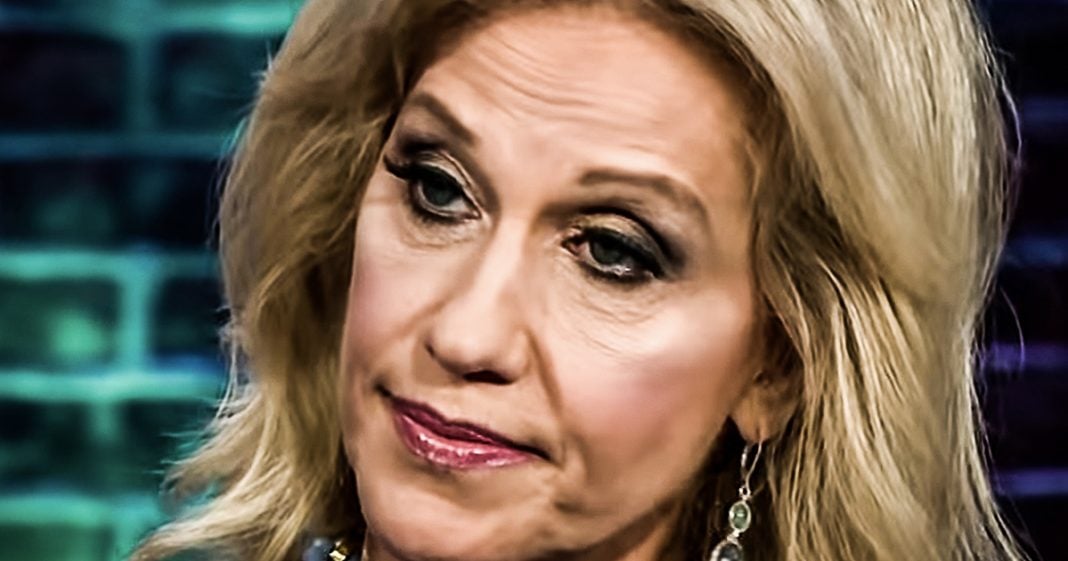 According to a new book by author Alexander Nazaryan, Donald Trump once berated Kellyanne Conway in front of others (including Nazaryan) at the White House because she failed to tell him that legendary journalist Bob Woodward wanted to interview him for his book a few years ago. Conway just stood there and smiled as the President chastised her, according to Nazaryan. Ring of Fire’s Farron Cousins discusses this bizarre exchange and why Conway didn’t stand up for herself.

According to a new book by Alexander Nasar, Ian, who is a columnist for Yahoo News. Donald Trump wants be rated Kellyanne Conway in the White House in front of Mr Nazaryan because she didn’t tell him that Bob Woodward, the legendary Watergate journalists, Washington Post columnist, actually wanted to interview him for his book a couple years ago. Donald Trump was furious that Kellyanne Conway didn’t tell him that Bob Woodward had reached out wanting to interview him. In fact, according to the interview that Nazaryan carried out with Donald Trump, while he was berating Kellyanne Conway, Trump said that Woodward had contacted him about 10 times, but he never found out about it because Kellyanne didn’t tell him. So Nazaryan claims that Donald Trump’s sitting there talking all this crap about Kellyanne sang she failed in her job. She didn’t do the right thing. She’s a big old screw up and his area and recounted what Kellyanne Conway did while the president was saying all of this.

She just stood there and smiled and accepted the abuse. Just absolutely took it on the chin without even flinching. But here’s the thing, workplace harassment here in the United States is a very real problem. Having an employer sit there in front of others whether they work for you or not. If they are present in the room and you make it a point to be rate a another employee in front of those people, that is a form of harassment. Folks.

If you have a problem with somebody, you pull them to the side, you go into a private meeting and you say, listen, we have some issues. We need to talk about this because I’m unhappy with your performance. Doing it in front of other people is when it becomes a problem, but obviously it’s not a problem for Donald Trump and seemingly it’s not a problem for Kellyanne Conway anyway, but the thing is this, there may actually be a reason why Kellyanne just stood there smiling, taking that kind of abuse from the president and it’s because she understands that working in this administration might open some doors for her in the future and she’s not going to do anything to jeopardize that. Now, obviously we know that former Trump staffers are having trouble getting jobs. Most people don’t want to hire these people because they’re corrupt as hell, and they’re all liars. Kellyanne Conway is the worst of the worst, so what could she possibly have in that White House right now that’s going to secure her future? She has knowledge.

She has about what has taken place inside of that administration from day one, and that’s why she stays. That’s why she takes the abuse. That’s why behind closed doors, according to a report earlier this week, she’s talking about how much she hates Donald Trump and how all of this is just an act, because at the end of all this, whether it’s four years or eight years, she’s going to eventually write a book, folks, and I can promise you it’s going to become a bestseller overnight because Kellyanne Conway is going to let it all fly. Everything. She saw, everything. She heard, everything. She knows everything that this man Donald Trump did in that White House. Kellyanne Conway was there. She saw it. She made a mental note of it, and even if she was being abused while doing so, she tucked it away in her memory for future use in her bestselling book that I promise you will come out shortly after this administration comes to an end. That’s why she takes the abuse and that’s why she refuses to abandon the president because her payday is right around the corner. That payday is going to be a little less than she thought. If she leaves the administration early.