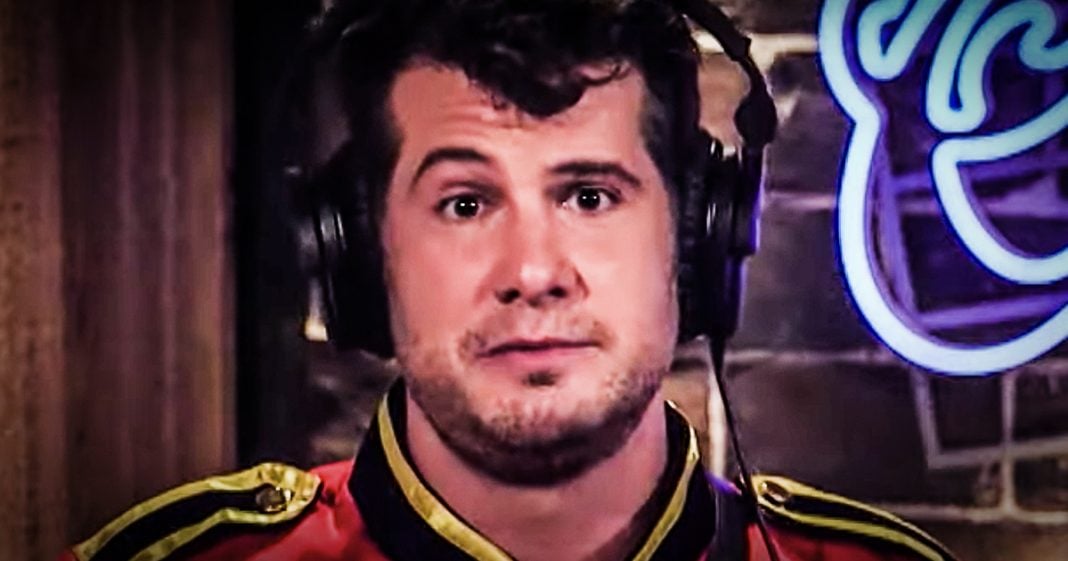 Right wing “comedian” Steven Crowder has been in the spotlight this week, and not for good reasons. His attacks on Vox reporter Carlos Maza have prompted YouTube to FINALLY step in and demonetize Crowder’s YouTube channel, at least temporarily. But the problem is that plenty of other channels have now been caught in the crossfire, including left wing channels who call out right wing hypocrisy and hate. This isn’t fair, but it also isn’t a sustainable business model for progressives. Ring of Fire’s Farron Cousins discusses how we fight this.

So in case you’ve been living inside of a bubble for the last week, uh, you obviously know about the ongoing saga with the Youtube ad apocalypse. Uh, I guess 3.0 is what we’re on right now. And it all started with failed rightwing comedian Steven Crowder. See for a very long time, Mr Crowder has been attacking a particular Vox reporter by the name of Carlos Maza, uh, using gay slurs against him selling shirts with gay slurs on them generally being a horrible piece of crap human being. That’s what Steven Crowder has been doing. And he finally got called on it. Carlos Maza went out there for several days on Twitter, calling out youtube for doing nothing about the fact that Steven Crowder was harassing him repeatedly in his videos that he was making a lot of money off of. We’ll finally, Youtube did what youtube does best and overreacted to the entire situation. Yes, they demonetize Steven Crowder’s channel, which he 100% deserves, although technically this is not a permanent demonetization.

And he is able to get monetization back on his channel if, of course he stopped selling the shirt, stops linking to the shirts and stop saying all of the horrible things that have actually made him popular, which he likely won’t do. But in the crossfire, Youtube, as I pointed out, overreacted. So they’re just starting to demonetize everybody once again. And the problem with this is that you have a lot of great, great voices on the left. People who call out Republican hate, Republican hypocrisy, endless wars, unjustifiable wars, all of those people are now also being demonetized because apparently those are topics for also not allowed to discuss on youtube. And to be honest, a lot of that has been going on for a long time. Uh, we, for example, if we do a video, if you mentioned racism, terrorism, hell, if you mentioned the opioid crisis, if you mentioned Syria or Yemen or Saudi Arabia, guess what?

You’re going to get demonetized and I’m willing to bet that just by saying those words right now, this video will likely end up being demonetized. But again, you’ve got people who basically depend on this for their livelihood out there calling out right wing hate and hypocrisy and their videos are being demonetized. Their channels are being demonetized and that’s not fair to them. You know, this algorithm has swept them up even though they’re not promoting these horrible ideas, they’re calling it out, they deserve better. Steven Crowder, on the other hand, 100% deserves to be demonetized and to go ahead and counter the argument. No, nobody is censoring him. Nobody has said Steven Crowder, we’re deleting your channel. He is still allowed to put in his hate filled videos all day, every day. He hasn’t been silenced in any way. It’s just youtube saying you’re not going to be able to profit off of your hatred. We all have a right to free speech, right, but none of us nowhere in any law in this country is it written that we have a right to profit off hateful speech. And that’s what Steven Crowder is starting to realize and I think that’s a lot of people in this country need to realize about this. Yeah, we have freedom of speech. We don’t have freedom to profit off of that speech regardless of what that speech is. But there in lies.

The other problem for those of us who depend on Youtube, that’s our platform. That’s where we post our videos. That’s where we make our money and I’m using we collectively, um, that’s a very bad business model. I’m sorry to say that, but it truly is. We’re depending all these other folks who are depending on a website that they have no control over, that they do not own, that they have no say in that is, you know, subject to change their algorithms or their rules on a whim. They’re depending on them to host their videos and send them money from the ad revenue. That’s a bad business model. That is not a sustainable business model. There has to be a better way. And there is, and I’m going to get to that in a minute, but before I do, I’ve got to go through a couple of lessons here. I was around during the Air America days at the very early days of Air America, all the way through the end, that progressive news outlet hemorrhaged money from day one.

I personally on behalf of other people there at the network, I was working in Pensacola for Air America up in New York. I would have to get on the phone with wealthy people all throughout this country. Wealthy liberals begging them to send some money to Air American please for the love of God, send some money to Air America. It’s the, it’s our only voice. That’s her only network. It’s all we have. Sometimes they would, most of the time they wouldn’t. The network limped along as long as it could. It gave us some great voices in this country, but eventually fell under. We personally down here in Pensacola back in 2007 started something called Go LeftTV and it was essentially what I’m doing right now. It’s online videos with Progressive News and commentary. We didn’t want to use youtube, which was very new at the time.

It did not even have ads at the time. You couldn’t even upload a video that was longer than 10 minutes at the time. So we created our own hosting service, our own video player, own video format and doing that. Spent thousands of dollars a month just in hosting fees and never once brought in a dollar in revenue, not profit revenue. So that project, although it was good, successful people liked it, it also hemorrhaged money. But then along came youtube with their ads in. Suddenly there was a place where progressive media could be profitable and now they’re taking that away and we should have known that was coming. Right? Again, we don’t own youtube, we don’t own the platform, we don’t own the servers, we don’t get to say what the rules are going to be. We’re at their mercy and that’s never sustainable. So what do we do?

How do we fight back? Well, I think David Pakman said it best yesterday on Twitter. This is what he said. If you don’t like advertiser boycotts of shows you like, then don’t make media relying on ad dollars. This is why I’ve been trying to grow direct memberships for years. Every dollar from membership as a dollar of immunity from advertisers, Youtube, Facebook, and that’s the method. Folks, if these channels are getting demonetized, there are ways to help them and that’s what this is about. You know, maybe they have a Patreon, maybe they have a membership option on their youtube channel where you can just give them a few dollars each month. You know, I want to put it to you this way. Take two of the biggest folks out there right now you have Kyle Kulinski and you have David Pakman. I think both of them are well over 600,000 subscribers if only 10% of their subscribers gave them $1 per month. That’s $60,000 a month to help support progressive media.

If 5% then you’re looking at 30,000 a month. Do you see what I’m saying? Like all these channels. If they have 100,000 subscribers, 200,000 or 50,000 or even less, whatever it is, if you support them, become a member and not just with the youtube channel of the patreon. A lot of them offer podcast subscriptions, you know, exclusive access through their websites, give the money directly to them instead of sending it through a third party. There’s some great voices out there. You know, David Kyle, Sam Seder, the rational national humanist report around the world with Jeff Waldorf, David Dual, all these guys are absolutely wonderful and many of them are suffering right now because of this adpocalypse again, all at the hands of Steven Crowder because he thought it would be fun to just make fun of somebody’s sexuality for months. He’s being punished, but so are so many of these other people and it’s because of the way the operates. And unfortunately we can’t fix the platform. We can only change how we support progressive media. You know, we said this back in the Air America days, we set it back and they Go Left days. We set it her the ring of fire radio days, and we’re saying it again now. If you want progressive media to survive, it’s up to you to help keep it alive.