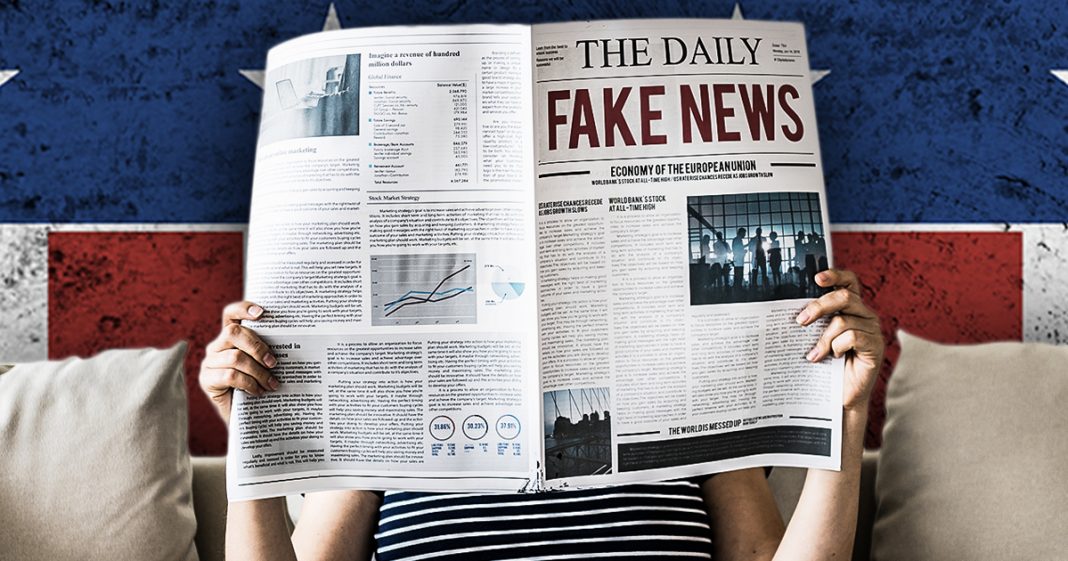 According to a new poll by the Pew Research Center, more Americans rank “fake news” as a greater threat to this country than terrorism, immigration, climate change, and even racism. On some of those points, they are correct, but on others they are way off. But fake and misleading news truly is a problem that we need to address as a nation, but considering that the actual fake news in this country tends to help Republicans, there’s little chance anything is going to change. Ring of Fire’s Farron Cousins discusses this.

According to the results of a new Pew Research Center poll, Americans now view fake news as a bigger threat to this country than terrorism, racism and climate change and immigration. Fake news according to most people is more important than every single one of those issues. Now on some of those issues, they’re correct. Fake news is a bigger problem on the issue of climate change. Going to have to 100% disagree with you on that, although there is quite a bit of fake news and misinformation swirling around climate change and there has been for decades now, but nonetheless, climate change, yes, that is a bigger threat to us than fake news, but nonetheless, Americans actually do understand this problem or at least this pole would suggest that they do because after all the problems they rated as more important than fake news include things like affordability of healthcare and the income gap and fake news is just a couple of spots underneath those things.

But here is where it diverges a little bit because a majority of Republicans tend to blame the fake news problem according to this poll on actual journalists, whereas everyone else blames it on, you know, the, the fake memes going around out there, the social media spreading fake news, the right wing youtube er’s and bloggers, the folks at Breitbart and zero hedge and Daily Caller and Daily Wire and Daily Idiot. Those are the people that everybody else says no, these guys are out here spreading fake news on a daily basis. While Republicans say no, it’s those damn journalists, the CNN folks or the fake news. And there in lies the problem. And Axios actually reported on this. Donald Trump has weaponized the term fake news. He has weaponized it to mean anyone that reports something that is not flattering to him, to Donald Trump and to his supporters. That is what constitutes fake news for the rest of us living in reality.

It’s the people out there sharing doctored videos, allegedly showing a, you know, doctors performing abortions and then playing with the fetuses. Uh, Matt Walsh of Matt Walsh blog actually posted a video of that that’s currently going around Twitter. It turns out they were actually a little dolls that ob Gyn is used for practice and training and whatnot. Weren’t not actual fetuses, but that didn’t Stop Matt Walsh a right winger from spreading this out there. That’s fake news. CNN is corporate news, but it’s not fake. Same thing with MSNBC. It’s corporate but not fake. You may not like what they have to say. You may not agree with the viewpoints they put out. They’re very corporate, but they’re not out. They’re flat out lying to you on a daily basis. Fox News on the other hand is it’s both corporate and fake. They lie, they spread conspiracy theories. They poisoned the public discourse as do these right wing websites and yeah, there’s some bad actors on the left as well out there spreading nonfat checked information, you know, spreading talking points without having facts and statistics to back them up. That’s a problem. And the problem as this pew, a poll points out, is that it has eroded the public’s trust in these institutions. Majority of people say that because of the fake news, I think it’s a 54% they’ve lost confidence in other Americans. 51% say that the spread of fake news has caused them to lose confidence in the government itself. Well, government itself has never really had a huge high vote of confidence from American citizens, but in one another.

Now that’s a big problem. There is so much fake news. There was so much hatred. There is so much division that we have stopped trusting each other here in this country. We don’t believe what one another has to say and yet may make for some fun, great youtube videos or comment fights, but is that really helping anything in this country? You know, we have said things in the past that later we had to go and take back because our source material turned out to be false. But you may not like what we have the say, but at the very least we provide our sources. We tell you where this information comes from so that you can go fact check it yourself and see that, oh, I don’t like them. But they’ve got sources. They verified this.

Other sites do the same thing, but if you’re going to a site and you don’t find any links in an article in less, it’s an original investigative piece, then that’s a problem. That is a big problem. If you’re going to a website and the only link send an article, our links back to that site itself, that’s an even bigger problem because it shows that they can’t find any outside reporting or studies or anything to support what they have to say. We try to be better and yes, sometimes we get it wrong. It’s happened honestly fewer than five times since we’ve been doing this that we’ve had to go back and say, oh, the source was wrong. We have to retract this story. We apologize. I remember each of them very well because it happens so infrequently, but fake news is a problem in this country. It mostly affects the right, but it affects a few people on the left as well, but until we get this problem solved, it’s only going to get worse. Right? This is not something that is slowly getting better. It’s getting worse. And part of the reason it’s getting worse is because Republicans don’t want to do anything about it because as expected, most of the fake news out there today happens to benefit the Republican party.