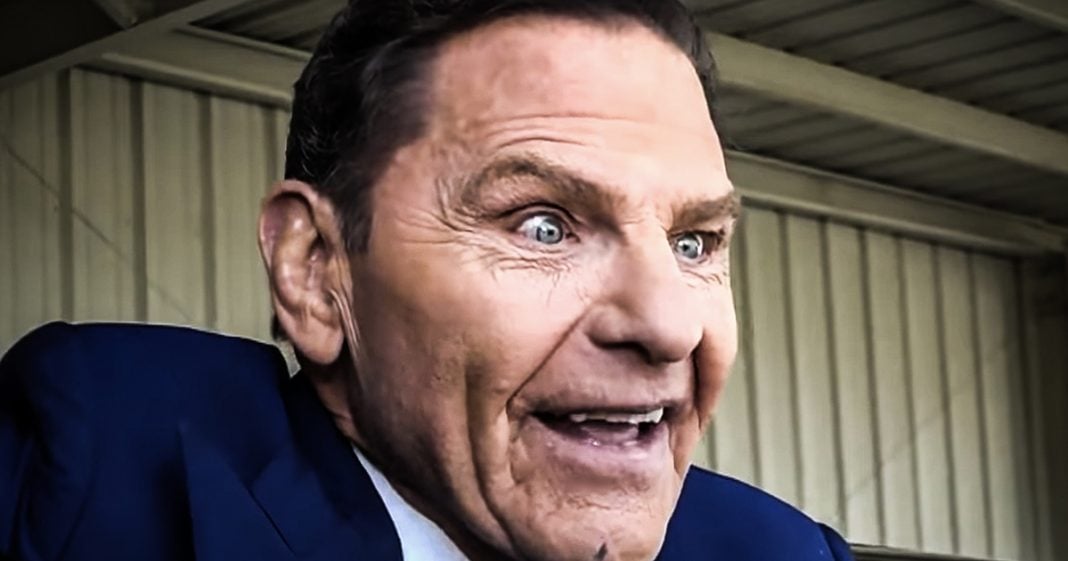 Televangelist Kenneth Copeland has been fighting back negative publicity for years over the fact that he insists on owning private jets for all of his travel. Not exactly keeping in line with the Bible at all, but that hasn’t stopped Copeland from repeatedly saying that it is impossible to talk to Jesus while traveling on a commercial flight because of all the “demons” and alcohol. The man is a con artist, as are nearly all televangelists, as Ring of Fire’s Farron Cousins explains.

Prosperity Gospel preacher Kenneth Copeland has been under fire basically since the year 2015 after it was revealed that he liked to fly in private jets and it was actually during that time that he made the following statement. He said, you can’t manage that today in this dope filled world. Get on a long tube with a bunch of demons and it’s deadly. That was his response in 2015 when asked, why are you buying a private jet instead of just flying commercial? And before he even made that statement, he defended a, or he invoked I guess Roberts, another televangelist in his mentor who said that I have to fly private because every time I get in a regular commercial airplane, I get all these unsolicited requests for prayers is damaging and I can’t, I can’t pray because everybody wants me to pray, but I’m trying to pray, but I really can’t pray when everybody wants me to pray, you know, kind of like I can’t, I can’t do it when somebody’s looking at me type thing.

Right. I guess Roberts is that, does that how that works? So nonetheless, Kenneth Copeland, again, back in 2015 defendant and he said, listen, there’s demons in those tubes and alcohol. And so I go fly private. So not that long ago, inside edition, reporter, um, Lisa Guerra went up and confronted Copeland said, Hey, do you actually think there’s demons on those planes? And he said, no, I do not. And don’t you ever say I did? It’s a biblical thing. It’s a spiritual thing. It doesn’t have anything to do with people. People, I love people, Jesus loves people, but people get pushed in alcohol. Do you think that’s a good place for a preacher to be and prepare to preach? Um, dude, actually, that’s probably the best place to be, right? Because if, as you say, alcohol makes people do bad things, wouldn’t you want to be there to help prevent those people from doing bad things?

Maybe even help prevent them from drinking alcohol? Right? I mean, to me, if I believed in the nonsense that you actually preach, yes, it would make perfect sense for you to be in that situation. Not spending tens of millions of dollars on private jets, which by the way, this guy owns three and you’re buying them with money that you’re taking from easily manipulable American citizens. That’s what’s happening here folks. He’s even admitted that sometimes he just uses these private jets to fly off to his vacation homes all over the world, not out there actually preaching, not out there helping the poor not out there feeding the hungry or healing the sick, going to his vacation houses. Why? Because every single televangelist in this country is an absolute fraud and Kenneth Copeland is right up there at the top. In fact, Copeland was asked by this inside edition reporter about his extravagant lifestyle, about his wealth and how that is literally contradicting everything in the Bible and he says they’re wrong.

It’s a misunderstanding of the Bible that if you go into the old covenant, do you think the Jewish people believe you should be broke? That was at morons response when asked like, Hey, a lot of preachers think you shouldn’t be living this extravagant lifestyle. That money should really be put to use helping people. And he immediately says the wrong look at the Jews. The Jews want me to have a lot of money because they love money. So now, not only is he trying to say that I should have private jets because I don’t want to get bothered by all these people wanting me to pray while I’m trying to talk to Jesus.

But now he’s like, oh, those people who point out the Bible, yeah, they’re wrong. Just go ask the Jews. So, so now we’ve got a con artist who also was apparently antisemitic, conning people throughout the world. What the Hell is wrong with this man? Honest to God, like there, there, there are demons in fact, but they’re in his own mind and they’re eating away at his brain. Until I guess probably years ago there was nothing left for those demons to eat. So now his head is filled with dead rotting corpses of demons. And that’s why he says the things he does. Kenneth Copeland along with pretty much, I’m going to, I’m willing to say all I am willing to say, all televangelists in the United States are complete and total frauds.