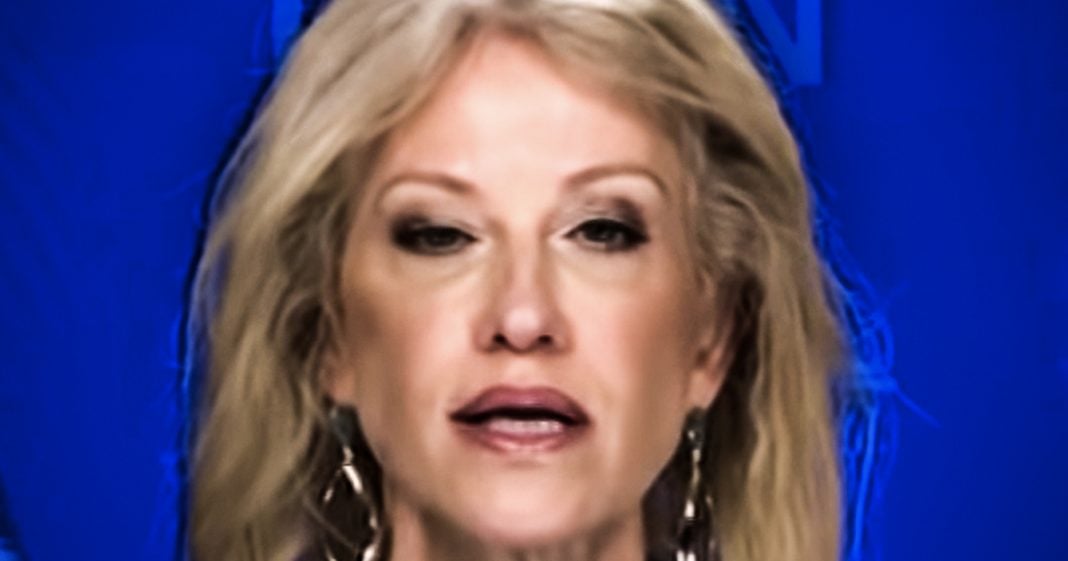 Author Michael Wolff has a new best-seller in stores about the Trump administration, and while on his publicity tour, he made a rather shocking announcement: Kellyanne Conway secretly hates Donald Trump. The public feud between Conway’s husband George and the President is completed coordinated so that the Conways can distance themselves from Trump in the future, Wolff claimed during an interview on MSNBC. Ring of Fire’s Farron Cousins discusses this.

Journalists. Michael Wolf has a new book out this week called siege Trump under fire and just like his last book, fire and fury. This one is filled with all kinds of information, giving us just a little more of a glimpse into what’s actually happening inside the White House, but it was during an interview with Lawrence O’Donnell on MSNBC on Tuesday evening while promoting his book. That wolf really gave us possibly one of the biggest bombshells that we’ve had and that bombshell was that Kellyanne Conway counselor to President Donald Trump secretly hates the president.

Now, the reason this came up obviously is because you have George Conway, Kellyanne Conway’s hunter’s a husband who has become one of the biggest Trump critics on Twitter. Kellyanne Conway has said, I do not agree with this. I support the president. I’m going to go out here every day cover for his lies by lying some more. It’s what I do. My husband is wrong, but according to Michael Wolfe and the people he spoke to, he talked to friends of the couple. He talked to people in the White House and he says that the whole thing is an act. This is a heavily orchestrated con, essentially so that the conways can distance themselves from Donald Trump when the time is right. Kellyanne Conway does not. In fact like Donald Trump, she probably doesn’t even like working for him according to this new book and all the Friends of the couple that wolf spoke to, but that doesn’t matter at all, does it?

Kellyanne Conway is a horrible human being. She’s a horrible human being who goes out there and provides cover for some of the worst policies that this administration comes up with for some of the worst behavior that Donald Trump engages in. She is the cover up artists for all of it. The apologist, the woman who comes up with even more lies to cover for the president’s lies. So maybe it is an act. Maybe she hates it and maybe she goes home and says, oh my God, George, I just, I don’t know if I can do this another day,

but it doesn’t matter. She’s already dug her heels in on this. This is who she is. This isn’t going to help her in the future. She’s not going to be able to go to a future employer or whoever it is and say, listen, yeah, I know I did all these horrible things on TV for the president, but trust me, it was totally just an act. I didn’t mean any of it. I secretly hated the guy. My husband was right about everything on Twitter and I agreed with them, but obviously I couldn’t say it publicly and whoever’s doing the interview is going to say, well, that’s fantastic, Ms. Conway. The problem is you set other things publicly. Your name is forever tarnished. It doesn’t matter what kind of feelings you held deep inside because you held him deep inside. You didn’t let everybody in the world know that, hey, the man I’m working for is pretty crazy.

Maybe we should do something about that. That’s not how it works. You don’t get to go back later and say, yeah, I know I did horrible things, but trust me, I didn’t want to do the horrible things. Nobody’s forcing you to do this, Kellyanne, you’re making the choice to do it. You are not a prisoner. You’re there voluntarily. You’re there because you think it’s going to help your career. So I don’t care if it is an act, if it’s all orchestrated, if things that the Conway household or falling apart or if they’re better than ever, none of that matters. What matters is that Kellyanne Conway for two and a half years now has been going on TV, giving interviews and telling us all that the worst things Donald Trump has ever done are actually perfectly fine and that the Democrats are the true enemy of the people along with the media. I’m not ever going to forgive Kellyanne Conway for any of the things that she has said or done while under Donald Trump’s employment. Even if she comes out and says it was all an act, maybe it was a comedy routine. Who knows? None of that is is an excuse for who she has become as a person.