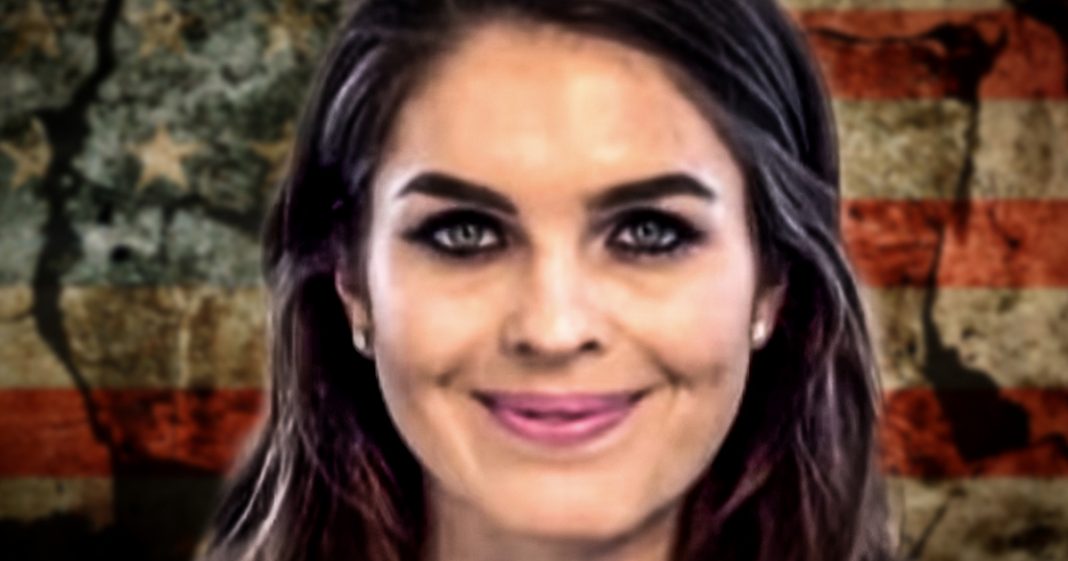 Despite calls from the White House to defy Congressional subpoenas, former Trump aide Hope Hicks has agreed to cooperate and turn over the documents that Democrats are requesting from her. This is part of the Congressional inquiry into Trump’s alleged obstruction of justice, and Democrats believe that Hicks may have vital information that could help make their case. Ring of Fire’s Farron Cousins discusses this.

Yesterday. It was revealed in White House counselor. Pat Cipollini had instructed both Hope Hicks and Annie Donaldson, who is a former deputy counselor with the White House counselor, former White House counsel Don McGahn. Anyway, Cipollini orders Hope Hicks and Annie Donaldson to not comply with a congressional subpoena. Cipollini told House Democrats that, hey, I’ve told them they’re not going to comply. And I’ve told them this because you have no right to know what kind of documents they have that is not appropriate for a third party house. Democrats did put their eyes on, it’s none of your business. Essentially. Pat Cipollini told us, and for awhile, in fact, even before Cipollini said, do not comply with the subpoena, essentially break the law for awhile. It seemed like Hope Hicks wasn’t going to comply with the subpoena. I mean, hell, the New York Times ran an article. Oh, her existential crisis. Do I break the law or not?

One of the dumbest articles the New York Times has ever put out, but nonetheless on Tuesday, Hope Hicks surprised us all and said, yeah, I’m actually going to be working with the Democrats. Um, I’ve already given them some documents and we’re kind of in negotiations right now about what I’m going to come and testify. So, sorry, Mr Cipollini. Sorry. Donald Trump. I’m going to comply with this subpoena because I don’t want to go to jail now. We’re still waiting on from confirmation that Annie Donaldson also complied with this. But the important thing is, is that Hope Hicks did our, this is one of Donald Trump’s closest confidants, both during the campaign and transition in the early days of the administration. And before he ever even ran for president, it was Hope Hicks. She was the one who was there for him. She was the one who was super close to him. But here’s the confusing part of the story. You see Nadler uh, the one who issued the subpoenas has said that they want to know stuff about obstruction of justice. That’s our main goal right now. Our main focus, we’re trying to learn about obstruction of justice. Right, okay.

The documents they’ve requested from Hope Hicks do not cover any of the time during which Donald Trump would have obstructed justice. So that’s a little weird, right, because they want documents related to Donald Trump’s camp pain and transition. Not what he did or didn’t do with James Komi or telling people how to testify or telling them to lie. None of that.

So what exactly are these documents that she is turning over? What are they in regards to and what are those darn up to now, I don’t say that because I’m suspicious or I think they’re sneaky. What I think through doing is finally playing this game of three dimensional chess that we’ve been hearing about for so long because I think they’re obviously digging into something else. Hope Hicks probably doesn’t have any information regarding obstruction and he Donaldson on the other’s hand. On the other hand, excuse me, 100% does. She worked with Don McGahn. Don McGahn was one of the people who kind of helped Mueller, uh, construct the obstruction claims. So Annie Donaldson’s documents. Yeah, I’m sure 100% that relates to obstruction Hope Hicks on the other hand, do not. So this is going to be interesting because obviously the Democrats in the house or digging into something that may not involve collusion, may not involve obstruction.

They just might be finally looking into, hey, Hope we know a lot of bad actors. We’re funding the inauguration here. You were with him at the time. Maybe you’ve got some information about that because we think there may have been criminal activity regarding that. We won’t know, but what we do know right now, most important thing is that the White House told Hope Hicks do not comply, but Hope Hicks had enough courage and enough sense to say, no thanks. I don’t want to go to jail. I’m going to go talk to the Democrats now. So good on you Hope Hicks for finally doing the right thing.