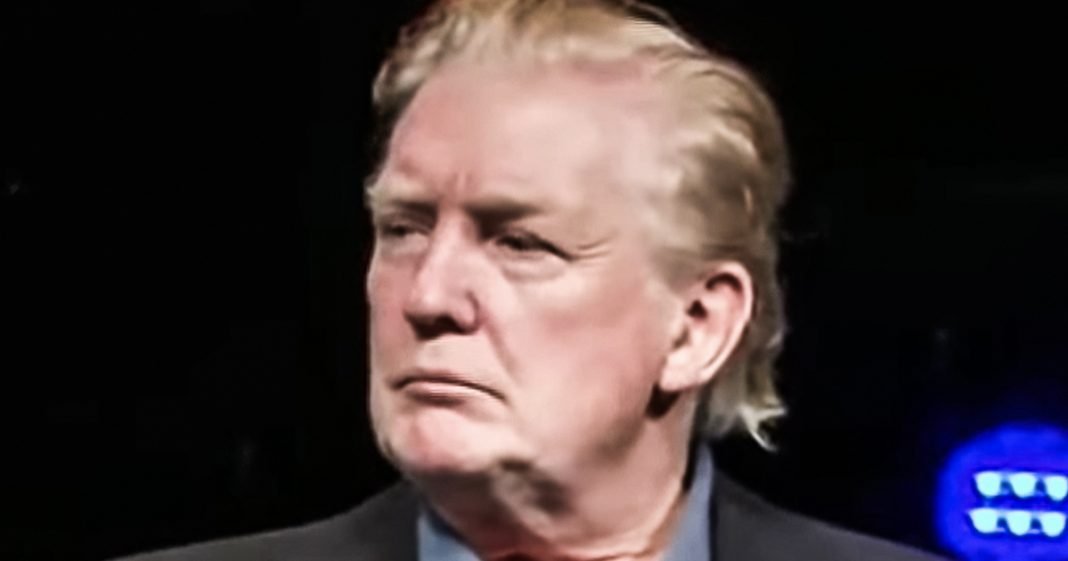 When Donald Trump took the stage briefly to pay respects to victims in Virginia, he was sporting a new hairdo that left the internet laughing for days. His usually fluffy hair was slicked back, making him look like his greaseball sons, and the internet immediately let him know how ridiculous he looked. But the hair may have been the least of his concerns, as his entire outfit came fresh off the golf course, showing that the president couldn’t even be bothered to change before this solemn event. Ring of Fire’s Farron Cousins discusses this.

So at this point, it’s been a couple days since Donald Trump took the stage in Virginia to pay honor to the victims in Virginia Beach from last week. But when he took the stage, it was a different Donald Trump we saw up there. It wasn’t the full pumped up poofy hair guy. His hair was all slicked back looking like Don Jr. or Eric still wearing his golf cleats in golf clothes. Cause obviously he couldn’t be bothered to change before this solemn event. But his hair is what immediately sparked ridicule online. So much so in fact that the daily beast actually went out and New York and talk to some hairstylists to ask them what the hell was going on with the top of Trump’s head that day. Now before I get into that, let me be completely clear. I typically don’t want to sit here and talk about somebody else’s hair or their style or their clothes or whatever it is.

But given what this event was for, I do think it’s worth talking about. And yes, I understand the irony completely of me looking like this, sitting here criticizing someone else’s hair. But you know what, I’m gonna do it anyway. So anyway, the daily beast goes out. They talk to hairstylists in New York and it’s really great. One of them, one of them says it can’t be an accident, you know, because one of the things that people had said, oh no, he obviously just had hat hair. He’d been out playing golf all morning. He had his hat on as he always does and that’s just hat-hair. But the hairstyle is pointing out, okay, it could be hat-hair, but in order for it to be hat hair, he would’ve had to have slicked his hair back first and then put the hat on over it like that.

Based on what we’ve seen from Donald Trump and other photographs with his hat, that is not in fact what he does. Same hairstylist went on to point out like even if it was hat-hair, if you did slick it back, put the hat on, there was a shine to it that is indicative of large amounts of product. So this was not an accident. This was intentional. Donald Trump intentionally made the decision to go out there on that stage to honor those victims looking like that. Still wearing his golf cleats. Roger Stone seemed to love it though. Roger Stone actually said on Instagram, I’ve known at Real Donald Trump for 40 years. I don’t think he’s ever looked better, but here’s the thing, folks, this event was not about what Donald Trump was wearing or what his hair looked like. It was to honor the victims of the latest mass shooting here in the United States, and that’s why Donald Trump’s choice of attire was absolutely despicable.

The man walked down on stage with pants that were about five sizes too big for him that he wears when he plays Golf, still wearing his golf shirt and again still wearing his golf cleats. The man couldn’t even be bothered to change his shoes before he walked out there to honor those victims. So don’t try to tell me that Donald Trump actually cared that Donald Trump made an effort because he didn’t. He went out there looking like a damn fool. Thinking about his trip to the UK. That was coming up in a few hours, probably didn’t even realize why he was at that event and no longer on a golf course, but that’s the kind of more on that we’re dealing with in the Oval Office. So yeah, mock him for his hair because if anybody on this planet deserves to be mocked for the way they looked, it’s the guy that continuously on Twitter mocks other human beings for the way that they look.