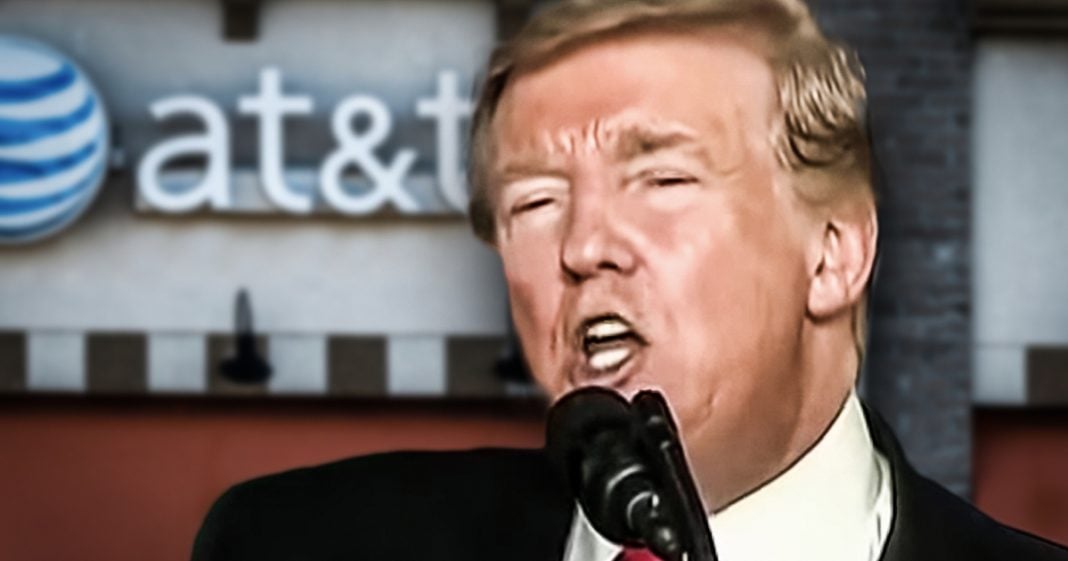 Donald Trump on Monday suggested that Americans should dump AT&T so that CNN has less money to spend attacking him. AT&T is the parent company of CNN, following a highly contentious recent merger. The president is hating on AT&T for all the wrong reasons and the same can be said for his dislike of CNN. Ring of Fire’s Farron Cousins explains what’s happening.

“I believe that if people stopped using or subscribing to add AT&T that’s supposed to be stopped by the way, they wouldn’t be forced to make big changes at at CNN, which is dying in the ratings anyway. It is so unfair with such bad fake news. Why wouldn’t they act when the world watches at CNN? It gets a false picture of USA, sad.”

Now, this was actually the first tweet that Donald Trump’s sit out, a sent out when he landed in the United Kingdom and according to reports, he was actually pissed off because when he got there he realized that he couldn’t watch Fox News and so he wanted to take it out on CNN because CNN does air internationally and now he’s angry at AT&T.

The company who thanks to that multibillion dollar merger just a few months ago now owns CNN. So he wants people to stope using AT&T because somehow that’s gonna punish CNN and force them to be nicer to Donald Trump. Now listen, I don’t like CNN. I don’t like at and t, but I don’t like them for better reasons than what Donald Trump doesn’t like them. See, that’s where it’s bugged me about these stories from the beginning. Donald Trump going out there and attacking the corporate media. I to hate the corporate media. Hell, most people in progressive media understand that the corporate media, CNN, MSNBC, and especially Fox News, they’re all absolute garbage and Trump agrees, except for on Fox. We just hate them for different reasons. He hates, hates them because they talk about how horrible he is and that is accurate. We on the progressive side, tend to hate these media outlets because they don’t cover issues that actually matter to American consumers and American citizens.

They’re talking about pablum nonsense. They push issues 24 seven that aren’t even really issues. Yeah. They each pick their preferred viewpoint and spew it out there to the public as if that is the only thing that could possibly ever be correct. Not saying we don’t do that occasionally, but we’re looking out for American consumers. They’re looking out for their advertisers and their shareholders. That’s why the corporate media sucks. Now as for AT&T, let’s not forget that this is a company that pocketed billions from the Republican tax scam and then laid off thousands of workers across the country. They were one of the few companies that said, hey, we’re going to give raises and bonuses at and t is doing right. And then they do it. They fired people instead know they have a history of being horrible with unions. There was a time, AT&T and the phone companies down here in the south before AT&T bought them, had huge union representation.

Strong, powerful, good unions. I know because my father was a part of one until AT&T bought them all out. Bell, south, southern bell, all of it. And AT&T tried to crush that. So, yeah, I also dislike AT&T except for the fact that unlike Donald Trump, I don’t hate AT&T because they own a company that isn’t as nice to me as I would like them to be. I dislike these companies AT&T, CNN and the rest of them because they’re screwing over American consumers. AT&T personally has been popped multiple different times, forcing their customers into a forced arbitration agreements so that they can’t sue them when they accidentally overcharge them. Five, $10 a month for 12 months, but they’ve also done it to 20 million people. So the company makes millions, possibly even billions.

You can’t sue them and that’s another part of the problem. But see, those are things that Donald Trump doesn’t understand. He doesn’t understand that he’s dealing with absolutely horrible companies. All he wants to do is put a little pressure on CNN, so maybe every now and then they’ll say, wow, Donald Trump is the greatest human being to ever live. That and that alone would make him happy. These companies, the corporate masters at CNN could continue screwing everybody over. But if they occasionally say a nice thing about Donald Trump, he’s willing to let their disgusting corporate behavior slide because he personally would finally be getting what he wants.