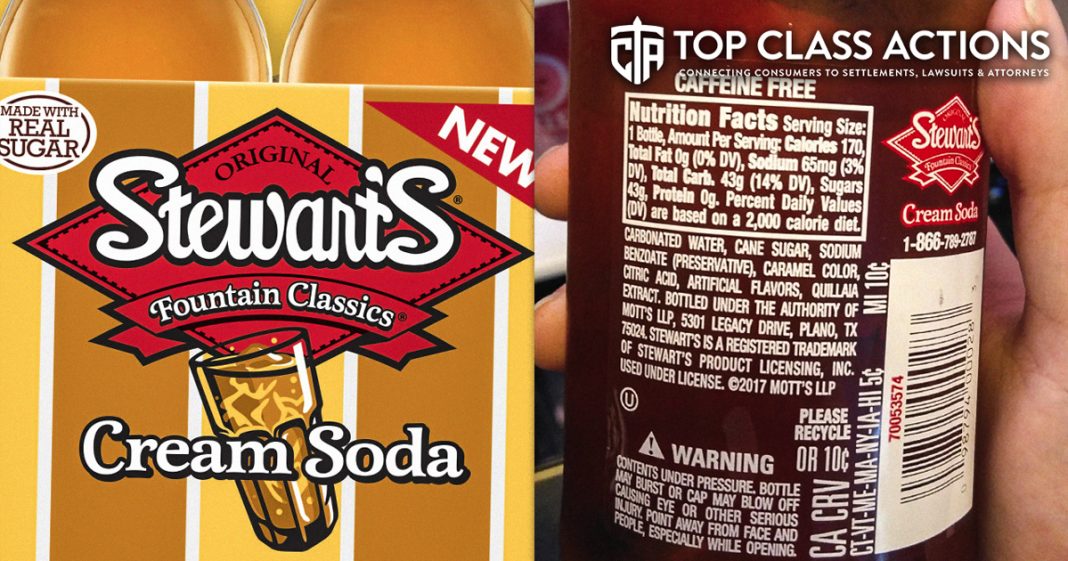 A recent class action lawsuit claims that Stewart’s Cream Soda doesn’t contain real vanilla despite the product’s labeling. These sodas are packaged in glass bottles and are represented by the company as “nostalgic ‘old fashioned’ fountain sodas, having originated at the Stewart’s Restaurants, a chain of root beer stands started in 1924.” For the flavors Orange ‘n Cream Soda, Black Cherry, Cherries ‘n Cream, Grape, and Key Lime, the labeling of the products indicates that the products are “naturally and artificially flavored.” This labeling reportedly differs on the cream soda packaging, which instead indicates that the product is “artificially flavored.” Ring of Fire’s Farron Cousins discusses this with Scott Hardy from Top Class Actions.

And I have Scott Hardy with me now to tell us about one of the most recent instances of a company not being completely honest about what it has in its product. And Scott, of course, I’m talking about the Stewart’s Cream Soda. It says, I mean, let’s be honest, it says on the packaging that it’s using artificial vanilla flavor, but it doesn’t necessarily say that in a way that consumers would be able to really see it. So they’re being honest technically, I guess we could say, but they’re kind of hiding the honesty in order to fool consumers, which again, as we’ve discussed many times, you still can’t do that either, can you?

Scott Hardy:                          Right. Yeah, the whole, the whole question is, is where are the artificial flavorings label is going to be on that box or on the container of the soda because as long as you’ve got it on there, you know it has to be readily identifiable. So you can look at that and know that you’re buying this, I assume yummy cream soda, but there is actually no real vanilla in it. And even though you know it might be down here, but then in fact it says it’s all natural up here or you know, you’re going to have an issue and you’re going to have a class action like this because of course you have other artisanal sodas out there that actually do contain vanilla and we’re seeing more and more of these soda producers that come out like with these, with the Stewart’s soda brand that you think is a smaller brand.

It’s a little mom and pop company that’s just making those flavors that you used to grow up with and love as a kid when in fact it’s a huge corporation. Mott’s in this case that’s selling these and they’re, you know, they, they might not be using pure cane sugar. They might be using, you know, just, just corn sweetener in there. They might not be using actual vanilla, like in this case they’re just using artificial flavors. But you think due to the packaging itself that you’re going to be paying a premium for something that is an actual premium product when in fact it might just be regular old soda that’s just in a glass bottle instead of a, of a higher quality soda fountain type beverage that you would hope to get.

And I’ve run into this, I don’t drink anymore, but I still like to have a good root beer and I’m at the store just trying to get a good high quality root beer. So when I’m out with my friends, you know, sitting on the patio, I can have a root beer while they’re having their frosty beverages and I had to go bottle after bottle after bottle to find one that didn’t have high fructose corn syrup in it. And I said, man, these are all fancy bottles. These are all fancy packages, but since they’re all owned by a huge parent corporation, you really have to dig in to know what you’re getting.

Farron Cousins:                  You know, that’s a really interesting point. And we see it a lot with like this, the craft beer craze, right? You know, that, that’s the big thing right now. Everybody wants to get away from the, you know, there are the Bud Lights and the Coors Lights. So they go for these, you know, oh, well this one looks, maybe this is a local beer. Maybe it’s, you know, only something I can get at one particular store because. No, you look at the label, you see, oh, this is also owned by Anheuser Busch. Oh, I thought this was a local.

So we’re seeing the same thing here with these cream sodas, with these other beverages. They make them look like they’re some kind of independent, you know, separate company, maybe somebody bottling this and a small little, you know, workshop that they built. Not usually the case, but again, that’s beside the point, that’s just a little message. People always check the bottle. It’ll tell you which major company owns it. But in this particular instance, it’s not about the company that owns it, it’s about what’s in the product. And as you had said earlier, you have one part of it that says all natural. Then you have another part of the bottle that says, eh, really not natural. Not In those words, but essentially that’s what it’s telling us.

So any consumer, when you see something in the store, if the first line you see is all natural, any reasonable consumer is going to make the assumption that what is in this bottle, what is in this product, whatever it is that it is in fact, just natural product. We’ve talked about cases like this in the past. I think this is going to be, you know, fairly successful one. I mean, probably not, maybe a huge monetary payout, but we could see consumers, you know, getting refunds, rebates, you know, a free product and more importantly, a label change on this particular product. What are your thoughts on that?

Scott Hardy:                          Right. I, I really agree with you. I don’t see this one going super far. I think that we will just see some kind of settlement most likely where, you know, Mott’s under their Stewart’s brand, will go ahead and agree to change the label on their product. They’ll give a discount, they’ll give a coupon, they’ll give some kind of benefit to the buyers and the people that love this soda so they can appreciate it. But yeah, this isn’t going to be a, in my opinion and from our experience here, a gang buster settlement for consumers. But that’s not always the point. The point is just to make sure that the labels are updated, so it’s easy for the average person to take a look at a product and know what they’re getting. And that’s really what I think this class action is targeting.

Farron Cousins:                  Absolutely, it’s not always about the money. Many times it’s just about changing the nature, the way that these corporations actually operate. Scott Hardy with Top Class Actions. Always a pleasure. And for more information on this issue, follow the link in the description of this video. Head on over to topclassactions.com and while you’re there, make sure you sign up for their weekly newsletter to stay on top of all of the issues that consumers need to know about. Scott, thank you again for joining me.