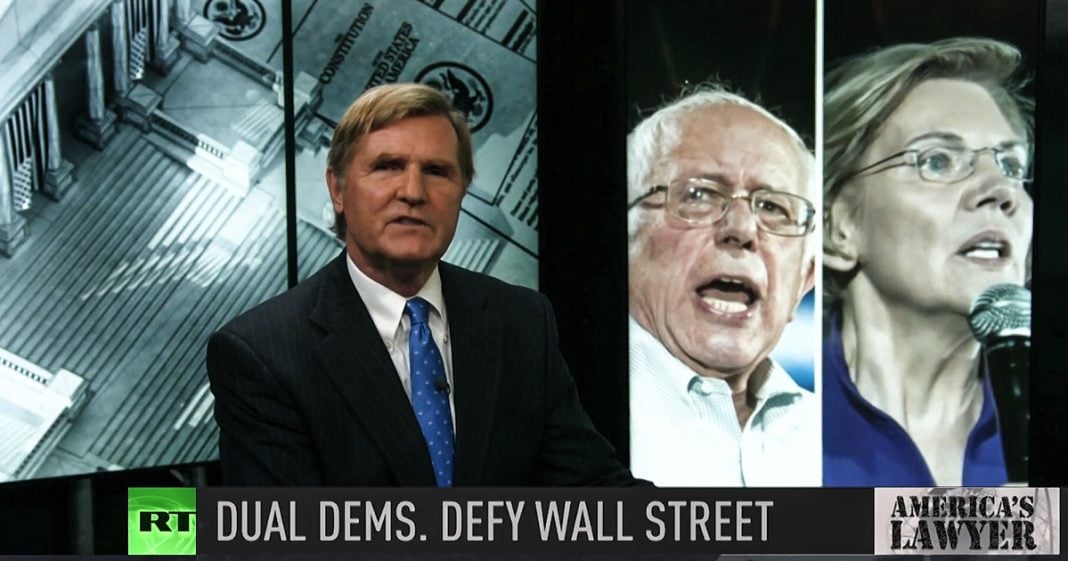 Via America’s Lawyer: According to reports, Elizabeth Warren and Bernie Sanders are the only Democrats who aren’t meeting with Wall Street big wigs or accepting their campaign money. Mike Papantonio explains more.

And finally tonight, some good news. There are currently more than two dozen Democrats trying to win their party’s nomination for the 2020 election. Nearly all those candidates, or at least the ones who actually have a shot at winning, have signed a pledge saying that they won’t take corporate money. But that pledge doesn’t mean much considering the only two candidates that are refusing to take dirty money from Wall Street. Those two are Elizabeth Warren and Senator Bernie Sanders.

According to reports, Warren and Sanders are the only Democrats who aren’t meeting with Wall Street big wigs. They aren’t attending finance industry fundraisers. They aren’t cozying up to finance executives. Instead, they’re pushing policies to reign in Wall Street’s greed and corruption and help American consumers. In the last 30 years, the finance industry has given more than $6 billion to politicians from both parties, and where the top donors right now, were Democrats in 2016.

That’s all for tonight, find us on Facebook @facebook.com/rtamericaslawyer. Also follow us on Twitter @americaslawyer. You can watch all RT America programs on direct TV, channel 321, and stream them live at youtube.com/rtamericaslawyer. I’m Mike Papantonio, and this is America’s Lawyer, where every week we tell you the stories that corporate media is ordered not to tell because their advertisers won’t let them. Have a great night.