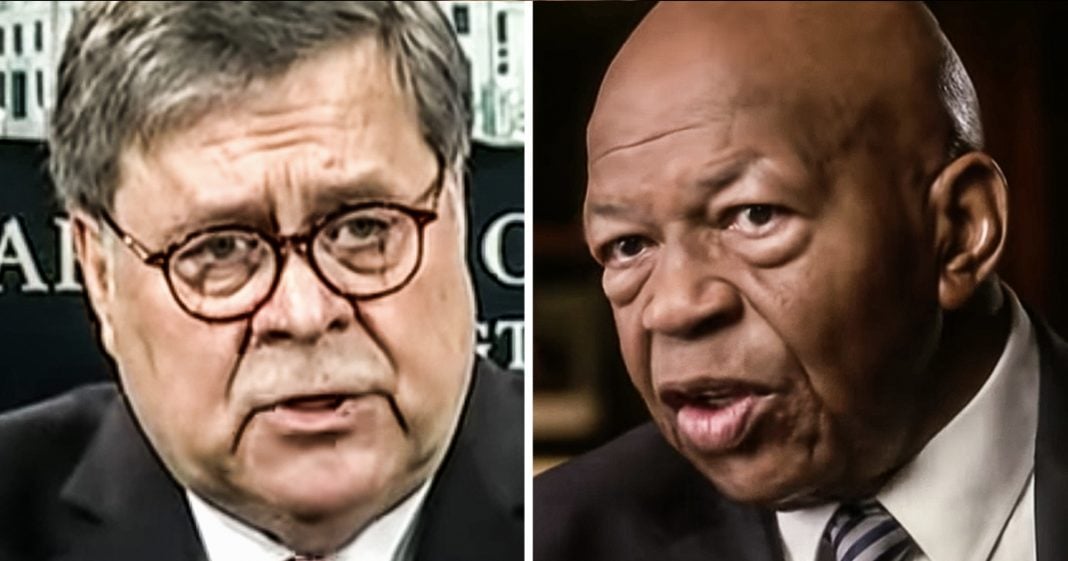 Attorney General William Barr has been stonewalling Congress on multiple different fronts, and Democrats in Congress may have finally had enough. They have given Barr until Thursday to produce documents that they are seeking (related to the citizenship question that was added to the census) and if he fails to deliver by Thursday, they are bringing a vote on holding Barr in contempt of Congress. There are some flaws in their plan, like the idea to give him a few more days to comply, but at least Democrats are getting angry and doing something. Ring of Fire’s Farron Cousins explains what’s happening.

Good News Folks, Democrats in the House of Representatives have finally had enough of the obstruction coming from the White House and they have said that they are almost certainly probably possibly gonna hold William Barr, attorney general of the United States and commerce secretary, Wilbur Ross in contempt of Congress if they don’t hand over the documents that they’ve been asking for for a month and a half by Thursday, but we may give them a couple more days now if you’ve got some mixed signals from what I just said, good, because those are the signals that the Democratic Party is trying to send out right now. We want to be tough, but we’re so not used to being tough that we don’t know how to do it. Here it is a representative Elijah Cummings, a man I, I have tremendous admiration and respect for chairman of the House oversight and Reform Committee has said that. Yeah, we’re trying to get information about the citizenship question that the Trump administration wants to put on the census. We asked for this information, text messages, emails, you know, any kind of records they have about how this decision was made. We asked for it back in a mid April. Here we are in the first week of June and they haven’t turned it over. They’ve missed multiple different deadlines and I’m only going to give him a couple more days coming says, and then if they don’t, I I’m might have to schedule a vote on holding these two men in contempt of Congress for not complying with the subpoenas.

Here’s the thing though, as much as I do like Elijah Cummings, uh, look man, they’ve been blocking you, stonewalling you for a month and a half. You don’t need to give them a couple extra days and then you’re going to make a decision. You do it right now. You do it immediately because you know what’s going to happen at a couple of days because we’ve seen it happen multiple different times in the last few months alone. They’re not going to comply and you’re not going to hold them in contempt just like you didn’t hold him in contempt last time or the time before that or the time before that. It’s going to become a lawsuit. It’s going to get tied up in the courts. And by the time we finally get any kind of resolution guests what the census will have already gone out because that’s how slow stuff happens in this country. Filed a contempt charges today and while you’re at it, go ahead and file some contempt charges against bar for refusing to turn over the full unredacted copy of the Mueller report and other materials related to the Mueller report.

The Democrats in the House of Representatives, they so want to be tough and don’t get me wrong, there are some people in there who are 100% tough. They are fighters, but they are being held down by the leadership inside the house. Who wants to say, well, we’ve got norms and you know, traditions and we like to do things this way. We don’t want to ruffle too many feathers. We don’t want to piss off the public, so we’re going to give them a couple days and if they don’t turn it over, I may just have to get tough and say, I’m only going to give you two more chances to turn this stuff over, or I may end up scheduling a contempt vote just to scare you. That’s not how it works. This administration is breaking the law by not complying. That’s the bottom line. They’re breaking the law by not complying with subpoenas.

That’s not as the New York Times called it an existential crisis as they described hope Hicks determining whether or not to comply with the subpoena. No, it’s the law. A subpoena is not negotiable and I wish Elijah Cummings and other Democrats in leadership positions in the House of Representatives understood that, listen to the people underneath you. Okay? Those are the people calling for impeachment. Those are the people calling for contempt votes and they’re being ignored. And that’s the next generation of leaders that’s going to take that house of Representatives to the next level when the old guard finally decides to retire. But unfortunately, we’ve got too many members of the old guard still in the House of Representatives holding back these younger, more spirited, more angry members of Congress. Because guess what, folks? If you’re not angry right now, then clearly you haven’t been paying enough attention. It’s okay to be mad. It’s okay to raise your voice about this kind of stuff. And it’s okay to demand better from the Democrats because this administration isn’t going to get any better. So the only thing we can hope is that our voices and our anger and our demands will make the Democrats in the House of Representatives a little bit better.