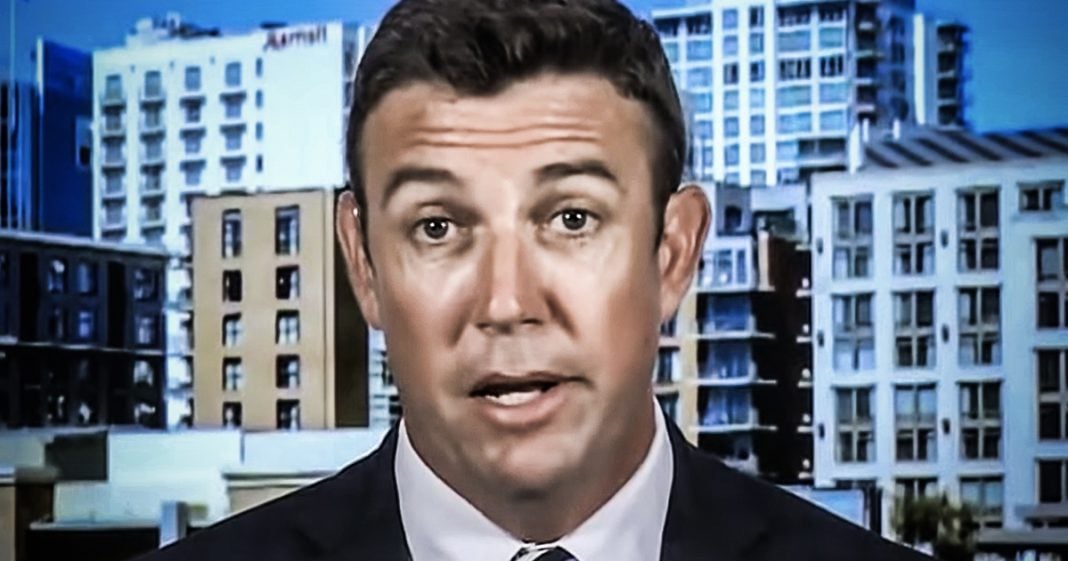 Republican Congressman Duncan Hunter casually admitted that he likely committed very serious war crimes during his time in Iraq, including murdering women and children. This statement would be bad enough, but there’s a small part of his statement that appears to be overlooked, and it tells us everything we need to know about the Iraq War. Ring of Fire’s Farron Cousins discusses this.

Last week, Republican Congressman Duncan Hunter, when on a podcast where he casually admitted that he totally committed war crimes when he was serving in the military in Fallujah in 2004. Now, before I get into his exact statement here, let me give you a little context. Uh, this was the Barstool sports interview for a podcast and Duncan hunter goes on there to defend Eddie Gallagher, uh, who is being charged with premeditated murder. He’s a member of the military. He was over in Iraq. There was an injured Iraqi on the ground. He went up straight up, killed him, okay. He’s being charged with premeditated murder for that. He is a waiting trial. Donald Trump is considering pardoning him. And Hunter went on this podcast, actually defend this guy, and I’ll get to a statement of defense in a minute. But here is the first statement where hunter again, casually admitted to committing war crimes himself. He said, I was in artillery officer and we fired hundreds of rounds into Fallujah, killed probably hundreds of civilians if not scores, if not hundreds of civilians, probably killed women and children. If there were any left in the city when we invaded. So do I get judged too?

Yeah, yeah. Yeah, you do. Um, if you’re casually admitting that you again committed war crimes and killed women and children, civilians in Fallujah, then yes, we’re going to judge you and hopefully eventually a actual judge is going to judge you because you should be in prison and not just for the campaign finance violations that you and your wife are currently awaiting trial for in case anybody forgot about that. Just to let you know what kind of all around horrible human being, Duncan Hunter truly is, he is currently awaiting trial for misuse of campaign funds. Here’s what he had to say later on in the interview about Eddie Gallagher. He said, I frankly don’t care if he was killed at just don’t care. Talking about the man Gallagher killed. Even if everything that the prosecutor say is true in this case, then you know, Eddie Gallagher should still be given a break guy thing.

So don’t get hunter goes on this podcast admits hey, yeah, yeah. I was over in Fallujah were just firing shell after shell after Shell. We didn’t care if there were civilians, we did not take the necessary precautions to make sure we didn’t kill civilians. We probably killed women and children too. You want to judge me for that? Go ahead. Literally everyone on this planet is now judging you Duncan. That’s what happens when you kill innocent people. That’s not an act of military, uh, that straight up murder. And that is exactly how the military would look at it. That is how a war crimes tribunal would look at it. And that is how any rational human being would look at it. But there’s a single word in there too. And this word I think gets, gets very overlooked in Mr. Hunter statement. I have not seen other articles.

They’ve quoted it, but they haven’t talked about that word. Probably killed women and children. If there were any left in the city when we invaded, we invaded. Now see, I thought the whole point of the Iraq war was to go over there and spread freedom, spread democracy. And yet Duncan hunter probably inadvertently just like his admission of war crimes admitted, Nah, hell no. We invaded something. We all knew anyway, but it is kind of refreshing to hear somebody who was over there admit that yes, we, the United States invaded Iraq. We didn’t declare war on them. We weren’t trying to free them from an oppressor. We straight up invaded them, and during that invasion probably killed a hell of a lot of women and children to or so says Duncan Hunter.