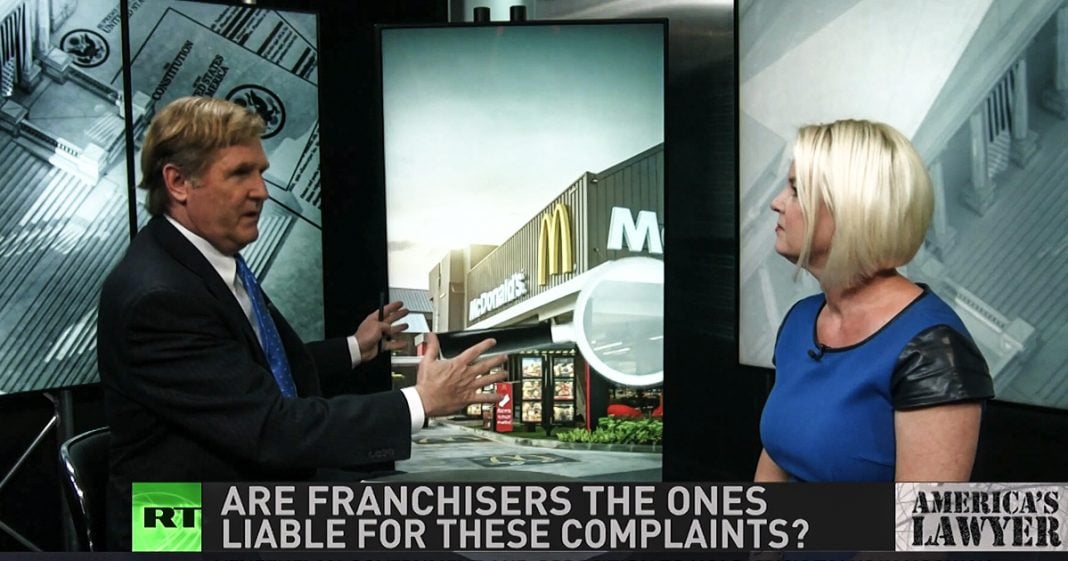 Via America’s Lawyer: Mike Papantonio is joined by legal journalist Mollye Barrows to discuss the legal troubles McDonald’s is now embroiled in, citing allegations of physical violence against employees and a corporate culture that fails to protect its workers from sexual harassment.

Mike Papantonio:             Well, it’s happy meal time at McDonald’s. McDonald’s corporation is feeling the heat after workers file more lawsuits over charges of condoning sexual harassment, complaints to OSHA about workplace violence. On and on. I have legal journalist Mollye Barrows with the Trial Lawyer Magazine to follow the story. Mollye, this is almost as bad as Wells Fargo.

Mike Papantonio:             Pick up a paper on any day and you’re going to see that Wells Fargo has done another bad thing. You know, whether it’s taking too much from a credit card or making up fake accounts. It seems to be in the food industry, McDonald’s is the equivalent of Wells Fargo. What’s your take?

Mollye Barrows:                Yes, they’re in the cross hairs for several different organizations. So last week was an especially bad week for the happy meal maker. I can’t imagine they were too happy with last week. More than two dozen lawsuits and regulatory charges were filed against the corporation. There was also another complaint that was filed with OSHA, Occupational Safety and Health Administration, that says that they’re allowing workplace violence.

So, that they’re not doing enough to protect employees, I should say, from workplace violence. So that particular complaint was brought by a store in Chicago, and of course McDonald’s is based in Chicago and they’re basically saying they had all this interesting information about when crimes were being committed against employees, the types of problems that they were facing.

Mike Papantonio:             Okay, so what, tell me, what is the corporate, what are, what’s McDonald’s saying? Like, ah, sorry we got it wrong. We’ll make a better hamburger. Buy our … what are they saying? I mean, at some point, here’s my, here’s the point. At some point, once this starts stacking up, it kind of is a pile on.

Mollye Barrows:                That’s this labor group that’s actually involved in both of these particular issues. Whether it’s sexual harassment in the workplace that McDonald’s is condoning, they say or it’s, you know, the fair wage issue or it’s this a workplace safety. You know, doing more to help protect employees and implementing policies. So essentially McDonald’s reaction to both of those is, well, these are franchises.

We have long maintained that we’re not directly responsible for these franchises. But some of these advocates for these other issues are saying, well, you know, you guys hold them the your franchisees to the hold their feet to the fire when it comes to business practices and marketing and accounting, so why can’t you implement better training and safety policies?

When, when this whole thing was put together, they decided, yeah, we can make a great milkshake and we can probably compete with Burger King and all the other folks, but where they really make their money is the money that that franchise pays out to them for the, for the property, the leased property. And because of that, McDonald’s is one of the biggest property owners in America.

Mike Papantonio:             Yeah, they really are. They’re more of a giant landlord than they are, and if you, if you’ve eaten a McDonald’s hamburger lately, you kind of get that, that we hope they’re better landlords than they are, you know, chefs.

Mollye Barrows:                Yeah, well that’s true. Well, and, and I guess what’s interesting to me is that you have the ACLU, the #MeToo Movement, Fight For 15, which is that labor group that’s, you know, involved in all those issues plus the low pay cause. And then Fight For 15 is also involved in the, a complaint against OSHA against McDonald’s. And this has been like part of a year long effort of just a, or confrontation, if you will, between McDonald’s and Fight For 15 alone.

And then the past three years McDonald’s has had all these, you know, lawsuits and like you said, every time you turn on the news they’re either being involved with some sort of protest. People walked out last week, out of 20 different restaurants to protest.

Mike Papantonio:             Yeah. Well here’s what, here’s what people forget. It all flows from the top. It’s like Wells Fargo. Okay. Wells Fargo is always, they’re always apologizing. Well, don’t apologize. Get new leadership. And when you get new leadership, things change from the bottom. The person that hires at the, at the very top affects everything below. And so sometimes a corporation actually reflects that personality at the top.

Mollye Barrows:                Well, do you think this is like a Walmart situation? Where Walmart became like the, the poster child for, we’re not giving our employees health insurance and look at all the money they’re making and it’s almost like they’re trying to do the same thing with McDonald’s.

Mike Papantonio:             I think, I think exactly the things happening. It’s almost like Wells Fargo, Goldman Sachs, they’re the, you know, they deserve it. Don’t get me wrong. They’re awful folks.