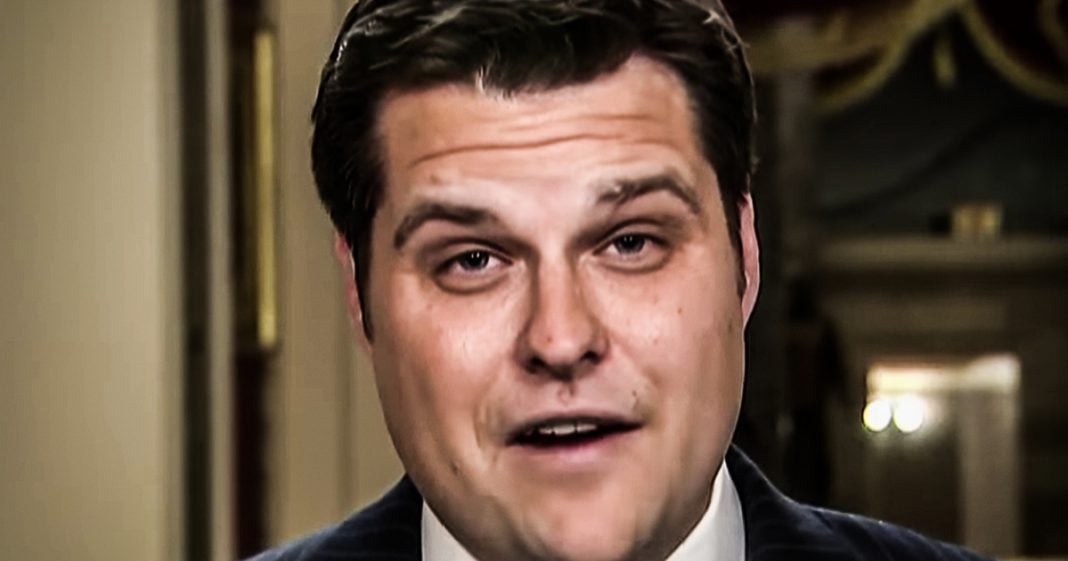 Republican Congressman Matt Gaetz was back in his district this past weekend, but some folks in Pensacola were not very happy to see him. After walking out of a local coffee shop, Gaetz was struck by a cup containing an unnamed drink, and the woman who threw it has now been charged with battery. This may seem like a minor incident, but the truth is that the cup means a lot more than most people think – and Pensacola native Farron Cousins explains why.

On Saturday, not very far from where I’m sitting right now. Republican Congressman Matt Gaetz was hit by Flying Cup containing an unspecified drink. Many have said that this drink was in fact a milkshake mirroring the, uh, milk shakings taking place over in the UK over the last week. But nonetheless, Matt Gaetz was here in Pensacola doing a little event, you know, shaking some hands. He’s walking out of a coffee shop and bam, cup hits him. Oh my gosh. He’s got stuff on a shirt now. He was totally fine. It obviously was not a scalding beverage.

The woman who threw the drink at him, a woman by the name of a Amanda Kondrat’yev was charged with misdemeanor battery. And released from prison on $1,000 bond battery. For throwing a little drink over at Matt Gaetz, one of the worst members of Congress that we have ever had representing us here in Florida’s first district. This story is very important and it’s very important for several reasons. It’s not just Haha Matt Gaetz got hit by a drink. Although I would still make that video even if that was the only point of it. But it’s not here. It is. First and foremost, we right now have Republicans as a result of this.

Who have actively called for Republicans to go out and buy more guns and ammo because the left is getting violent. There is a world of difference between throwing a drink on another human being and trying to murder them because this was not attempted murder. This wasn’t even, I want to physically injure you. This was, I want to humiliate you. I want to stand up to you and show you that we do not like you and we do not like your policies. And yet Republicans are out there telling us go stock up on guns. Go stock up on is because the left is getting bad. Which is again, ironic and I brought this up before because at any given moment the left goes from being complete little snowflakes and need their safe spaces to some kind of violent hoard that’s going to kill every one of us. Uh, those two things really are mutually exclusive. We can’t be both, but Republicans love to classify us as both because they have no idea how to actually win a battle of ideas. So they try to reclassify who their opponent is and that’s what they’re doing. Uh, in this particular instance, the second reason this is important is because two years ago in a town like this, a town like Pensacola, Florida, this wouldn’t have happened.

This wouldn’t have happened folks. And it’s good that it did. This is a good development, this area that has voted solidly 100% Republican since the election of John F. Kennedy. Every election. Since then, this area where sitting has gone full red every single election, they’re starting to wake up. We’ve got younger people coming into this area. We’ve got younger people bringing in new ideas, new perspectives, new backgrounds, diversity taking hold in this area. The old guard, the people who’ve been voting Republican since that JFK election, their time on this planet, uh, you know, dwindling down. Most of them, not even around anymore. So the demographics are shifting. Like I said, two years ago, Matt Gaetz could have walked around down here and never once thought that he would be confronted in this manner. But now it’s something he’s going to think about every time he steps foot in a business down here, something he’s going to think about every time he does a little town hall down here running for reelection.

Things are changing in this area very slowly. Does that mean Matt Gaetz is not safe? Absolutely not. Matt Gaetz will likely still win reelection and I can promise you is going to try to fundraise off this a drink incident. In fact, here’s what he tweeted out after. Clearly it takes more than a drink to slow down our great team. We always thankful to the brave law enforcement officials who keep everyone safe at our events. Yeah. Because we didn’t police officers there to protect everyone from the flying cups. And more importantly, this part, clearly it takes more than a drink to slow down our great team. Um, speaking of slowing down with the drinks, how many DUIs have you had, Matt Gaetz? How many times you’ve been arrested? How many times his daddy, his political connections here in the state of Florida had to get you off the hook for those DUIs. So I wouldn’t be talking about, you know, drink slowing us down in your Twitter feed when everyone online understands what a horrible human being you, uh, you are. And that you probably should have had your license revoked many years ago, but you didn’t because your daddy is well connected in the state of Florida and got you off the hook.