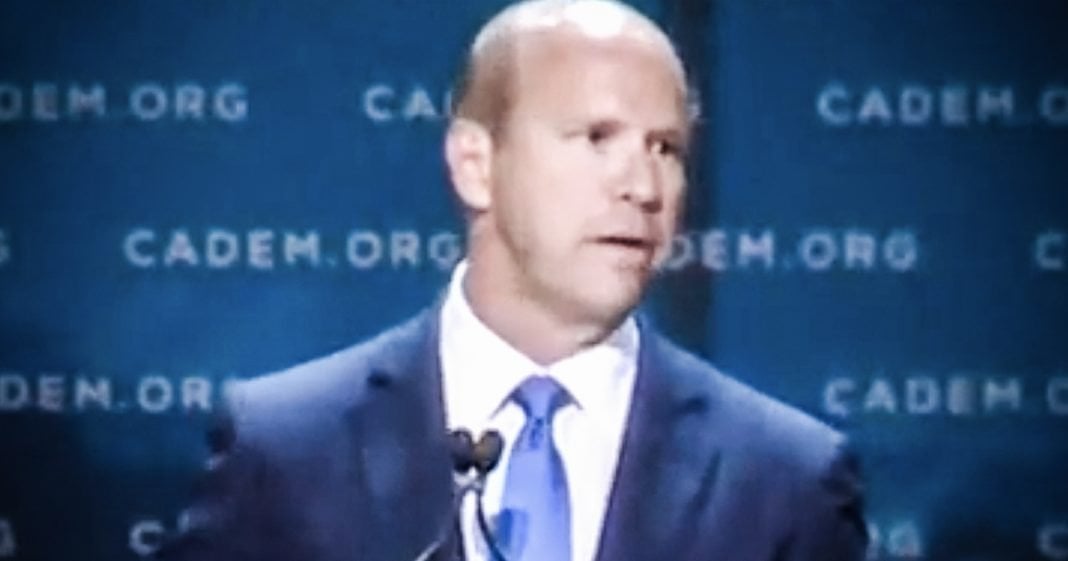 Democratic Presidential candidate John Delaney received a minute-long series of “boo’s” from a crowd this past weekend after he declared that he doesn’t support Medicare For All because it would kick 150 million Americans off of their current healthcare plans. Delaney seems to be laboring under the belief that people actually LIKE their insurance plans, even though close to half of people with “good” insurance still can’t afford their medical bills. Ring of Fire’s Farron Cousins discusses this.

Former Maryland congressman slash Democratic presidential hopeful John Delaney was giving a speech out in California this past weekend where he told the crowd that Medicare for All is not the answer. It is not the answer to America’s health care problems. Medicare for All is a nonstarter for Mr. John Delaney. So how did the crowd respond with more than one full minute of booing? John Delaney, Democrat running for president was booed on stage for well over a minute because he refuses to support Medicare for All. When he was finally able to kind of get the crowd to settle down enough to where they could hear him again, I’m sure none of them wanted to hear what he had to say after that, but nonetheless, he tried and this is what he had to say. You said we should have universal health care, but it shouldn’t be the kind of healthcare that kicks 150 million Americans off their healthcare.

That’s not smart policy. I want everyone to have healthcare, but it’s got to be a plan that works for every American 150 million Americans who currently have private health insurance. How many of those people do you know that walk around saying, hell yeah, my insurance kicks ass. I don’t have to worry about a thing. My copays are reasonable. Prescription drugs are cheap for me. My insurance covers everything I could possibly need. The truth is, you really don’t hear people walking around saying that, except for the people who have so much money in the bank that paying $500 for prescription medicine doesn’t really get noticed. 28 million Americans right now in this country who have what is considered to be good health insurance. That is almost half of them. 28 million Americans with that kind of health insurance still say they can’t pay their medical bills, they can’t afford it.

So even though they have insurance, they can’t go to the doctor. But John Delaney would rather stick up for the insurance companies then to say, you know what? Let’s get a federal plan in place. Let’s get Medicare for All. Let’s get rid of private insurance because they’re absolute trash and instead wants to do this while we should have healthcare for everybody. But you know, we don’t want to upset the insurers. And then he had the audacity to go on and say, during the the booing, this is called the battle of ideas. My friends. Then what’s your idea? Because you didn’t come up with one, you had some talking points. You came to this battle of ideas completely on armed and unprepared for the public to give you the backlash that they did. The backlash that you, by the way, actually deserved. On Sunday evening day after Delaney gets booed, uh, he goes out in his campaign, releases a statement.

He attacked the people in the Democratic Party who demand purity according to him. He stood by his position and he said, a few boos aren’t a big deal. Making a really bad mistake on healthcare is, and I think we can all agree on that, Mr. Delaney, because that is exactly what you are doing on healthcare. It’s likely while you’re, why you’re polling at at best 1% right now, nobody knows who you are. Nobody cares who you are. And you don’t even support an idea that is broadly supported by every single American, regardless of political affiliation. Medicare for All is a winning issue. Hell, at this point, Medicare for All, judging from crowd reactions might be the only winning issue for Democrats. And if you don’t support it, then go ahead and buckle in. Because we’re in store for another four years of Trump in the White House.