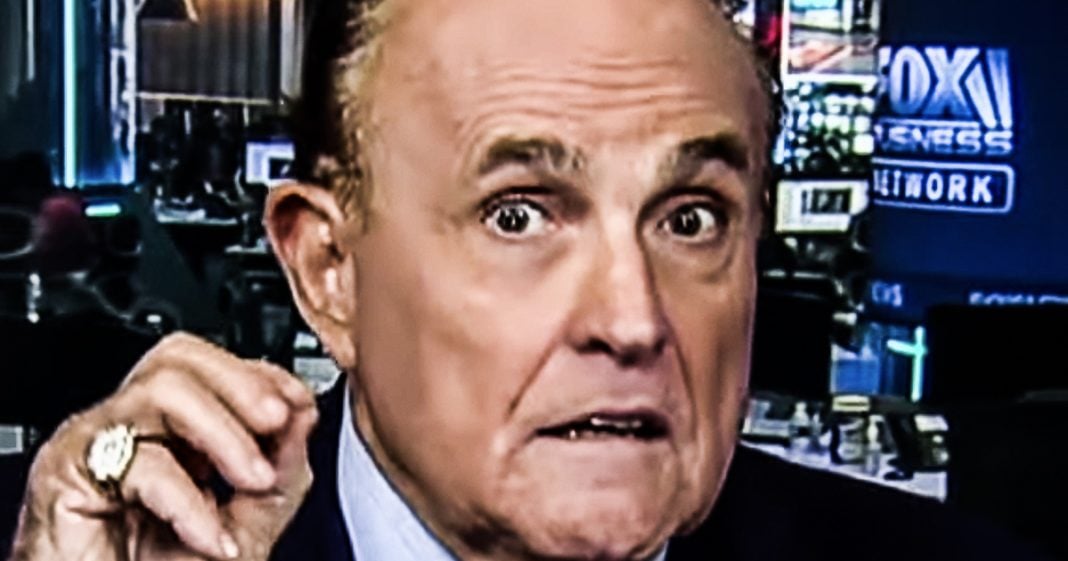 Donald Trump’s attorney Rudy Giuliani said during a recent Fox News interview that he was considering suing special prosecutor Robert Mueller for $17 million because he didn’t make a determination on whether or not to bring charges against Trump. Giuliani called this a “dereliction of duty” and told Fox News’ Jeanine Pirro that he could bring a qui tam suit to get the money back that was spent on the investigation. Ring of Fire’s Farron Cousins explains how these two “brilliant” legal minds clearly know nothing about the law.

Donald Trump’s attorney, Rudy Giuliani is absolutely furious that Robert Mueller didn’t bring charges against Donald Trump. Now, I know that seems really weird, but apparently that is the point that Rudy Giuliani was getting at this past weekend during an interview with Fox News’ Judge Jeanine Pirro. Giuliani brought up the fact that Robert Mueller failed to do his job and did not bring charges against Donald Trump, or he did not clear Donald’s right. He didn’t make a decision, which Giuliani said was quote a dereliction of duty. He went on to say, why do you appoint an independent counsel, a special counsel? Theoretically, there’s some kind of conflict. They’re supposed to make a decision, but because Robert Mueller didn’t make a decision, Giuliani told judge Jeanine that he is considering filing a $17 million lawsuit against Robert Mueller. He wants to get the money back that the government spent on that special prosecutor’s investigation. Actually completely ignoring the fact that the investigation ended up turning a profit with all of the assets they seized from Paul Manafort alone.

So it made money. The government got a check from this folks, but Giuliani’s pissed he wanted some charges against Donald Trump apparently, and he’s mad enough to consider filing a $17 million t tam lawsuit against Robert Mueller judged. Jeanine seem to agree, and here’s the thing, both of these people have law degrees. Okay? They both are supposed to wear, told understand how the law works, but apparently they don’t because Giuliani did specifically mention bringing a key Tam lawsuit, which is the kind of lawsuit that a whistleblower would bring when they find fraud against the government. None of that applies to what happened with the Mueller investigation in any way, shape or form. You would think Rudy Giuliani would be very familiar with that phrase, key Tam with those kinds of cases, but apparently he has no idea what they are. Secondly, special prosecutors have immunity. You cannot sue them just for doing the job.

That’s illegal. You would think that either Rudy or judged Jeanine would understand that and stop this stupid idea in its tracks, but instead they’re both gung ho. And third, you would think that Rudy Giuliani would have listened to Robert Mueller’s press conference where one of the first things he said was, I had to go into this knowing I can’t legally bring charges against the president. He said that except for the fact that technically, yeah, you could have brought charges against the president. You made that decision based on a 1970 some odd memo from the DOJ because they didn’t want to bring charges against Nixon. It was a memo. It wasn’t the rule. It’s not the law. It’s not in the constitution. You absolutely could have done it, Robert, but Giuliani doesn’t know that. Judge Jeanine doesn’t know that. You were trying to be nonpolitical. I understand that Mr Mueller, you didn’t want to say. I’m on the left. I’m on the right. Where am I? I don’t know. But here’s the thing.

You did need to make that determination. I will agree with Rudy Giuliani on that point, and you should have said, hey, if the DOJ is not going to prosecute them, Congress, come see me after work today so we can talk about the evidence and I can tell you what you need to do. Since I’m the one who knows it all. Giuliani’s idea is stupid. Don’t get me wrong. One of the dumbest things we have heard from this man who basically nonstop spew stupid things out of his mouth, but he is right that Robert Mueller should have brought charges. He should have come to a conclusion because now, because he didn’t, Trump’s out there saying, no collusion, no obstruction, I am exonerated. Meanwhile, Democrats are still kind of twiddling their thumbs saying, oh, should we impeach? I don’t know. I don’t know if the voters are going to like that. Yeah. If you would have been just just a little bit more clear, we could be looking at a very different situation in the country today, and to be honest, I think that’s actually why you weren’t more clear about your report.