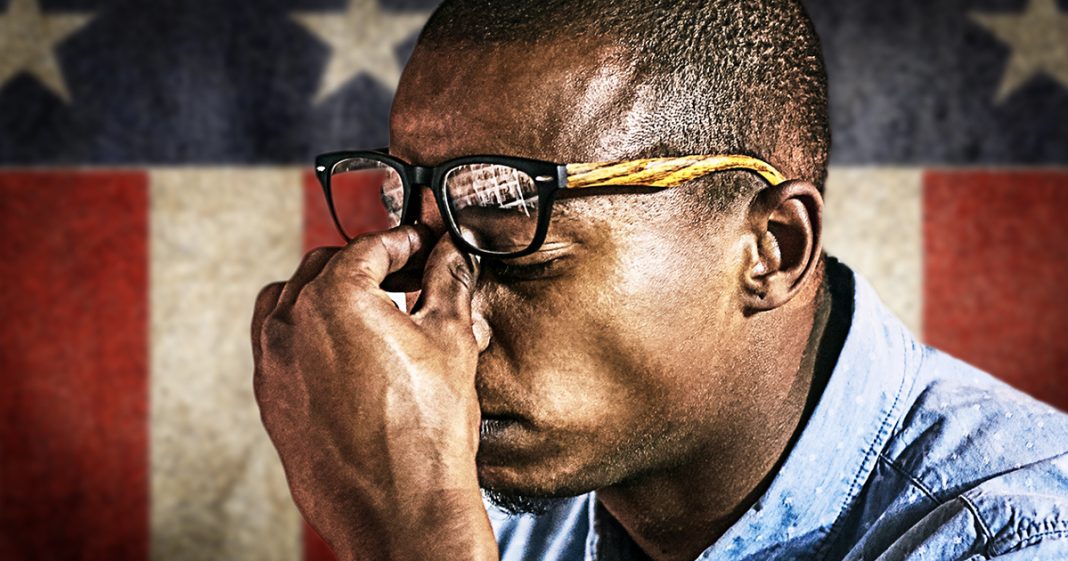 According to a new study by the nonpartisan Congressional Research Service, the Republican tax cut package from late 2017 has literally done nothing to help average American citizens. Wages aren’t growing for workers, but stock buybacks are at an all-time high, meaning that the rich are getting richer and everyone is getting screwed. Ring of Fire’s Farron Cousins discusses the new report.

Earlier this week, the nonpartisan Congressional Research Service published a new report, a 28 page report, proving that the Republican tax cuts passed in late 2017 have done literally nothing for average American citizens. They have, however, given great huge benefits to the top 1% so the one and a half trillion dollar GOP tax scam pushed by Republicans and Donald Trump and still touted by Republicans and Donald Trump. It’s now been confirmed yet again that it did nothing for average American citizens. Here’s what the new report found. First and foremost, real wages across the board did not change. Okay, well that’s a bummer. They told us they were, they told us we were all getting raises. I mean, in fact, they told us anywhere between four and $9,000 per year. It also said that those bonuses that were announced by all those companies, you, oh, we’re given, you know, uh, 1% of our employees $1,000 bonus.

It said that those turned out to only be PR stunts because none of those bonuses were permanent. They were all one time and it was to garner some goodwill towards the company. Okay. So that talking points gone too, but how were were told the economy’s doing great, right? Everything’s great, the unemployment rate’s down, so, so surely these tax cuts at some kind of huge economic benefit, right? Well, no. Again, this study by Congressional Research Service says that historically we are still on the same track. There are tax cuts had no impact. There was not a surgeon GDP, it was not a surge in job creation. Everything stayed on track with what it had been prior to the tax cuts package, a passage. So there is no direct benefit of any kind that you could link exclusively to the tax cut passage. Other than the fact that stock buy backs are at an all time high. Well, that’s great, right? If you’re a, you know, board member or a CEO of one of these companies than hell, yeah, that’s a good thing. That’s a ton of money back in your pocket. Millions of dollars back in your pocket if you’re an average American citizen, that doesn’t benefit you at all. Study also found that businesses are not reinvesting the money into their companies.

So we didn’t get wage increases. We don’t get consistent bonuses. They didn’t create new jobs because of this and they’re not investing it in their own companies in terms of expansion or innovation. The only thing this tax cut dead was put more money into the pockets of wealthy people. And so far every report has told us this thing. This is not new information here. It’s just a reaffirmation of what we already knew and what we had already said would happen prior to the passage of the tax cuts.

And this is a study that every Democrat right now, not just the ones running for president, but any of them who hold office, this is a study that I want every one of them to fold up and keep in their pocket. And anytime a Republican goes out there and tells you that these tax cuts are benefiting people, I want them to pull it out and say, well, hold up. Let’s look at the facts. Because this is a study that every single American citizen needs to know about. Most people already agree, both left and right that they saw no benefit from the tax cuts, but that will not stop Republicans from running on it in 2020 whether it’s house, Senate, or presidency or hell, even local races. You have to counter it.

All of us, every one of us, we have to counter it everyday. We have to counter it consistently, calmly, and with the facts because the American people need to know that the Republicans are about to go on a massive lying spree telling them that these tax cuts helped them. Even though quite literally every single study that’s looked at it shows that they got absolutely nothing and the people at the top are reaping all the benefits of that one and a half trillion dollar tax cut package.