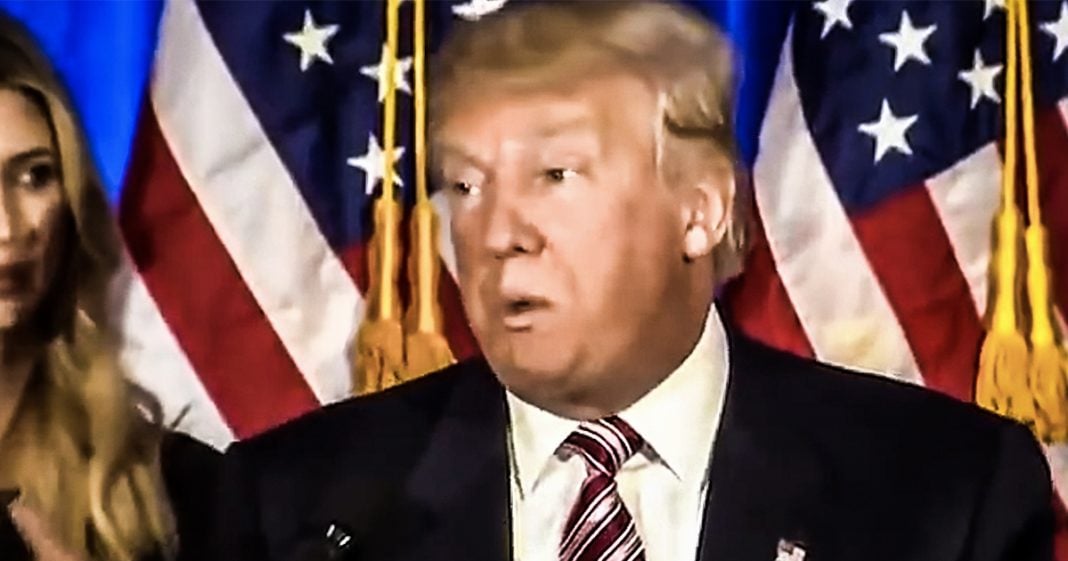 A group called Republicans For The Rule Of Law has gathered up former Republican leaders from past administrations to warn us that the President committed Obstruction of Justice and this matter needs to be taken seriously and Trump needs to be held accountable. With a powerful new ad, they plan on informing Americans about exactly what the President did and what needs to happen now. But could there be ulterior motives for Republicans wanting to oust the President? Ring of Fire’s Farron Cousins believes there are.

Farron Cousins:                   For the last two years. I have been saying mostly jokingly, that if Republicans took the lead on impeachment, if they remove Trump from office, suddenly they get to be the heroes of the public. They can secure longevity in the House and Senate, possibly even in the White House. But if they took the lead, suddenly they make the Democrats look weak and stupid and Republicans get to remove their own guy and look like the heroes. I never in my wildest dreams thought they would actually do that, but apparently maybe they were listening. A new group, uh, called Republicans for the rule of law has put together an ad featuring prominent Republicans from past administrations who are essentially telling us that we have to impeach the president. Here’s the ad.

“Here it is from Republicans for the rule of law and soon in a shorter version coming as an ad to a TV set near you, senior GOP lawyers on Trump’s obstruction of justice.”

So Bill Kristol is telling us they’re going to shorten this up a bit. They’re going to run it on ads all over this country so that everybody in the country understands exactly what Donald Trump did. Why the hell are the Democrats, not the ones who put this together? Why did it have to be the Republicans, right? I, this is something that Democrats could have easily done. Create a 30 to 62nd ad, same same design here. Send it out to TV stations all over the country and run it, and that’s how you have to do. That’s all you had to do and you couldn’t do it.

Just this one little thing, talented video editor could have put this together in a day, could have been ready to go, could have sent it out, upload of the files, whatever it is, put it on Youtube. If you have to just tweet it out. I don’t care. But you couldn’t even do that. You had to let the Republicans come forward, come up with the idea, do a better job of it, and then present it to the public as if Republicans were the saviors folks. I was joking when I said Republicans could be the saviors of this country. I didn’t think they’d take it seriously, but apparently they did. And I, I guess I apologize for that, but here’s the thing. I don’t believe for a second that any of these Republicans actually do care about the rule of law. I mean, let’s be honest here. The people they pulled from, oh, the Reagan administration.

Yeah, they were. So for the rule of law back then, same thing with, with George Bush administration, George W. Bush administration. Yeah. They were all known as just being totally by the book, rule of law, 100% there are definitely ulterior motives here, especially with Bill Kristol. These people just don’t like Donald Trump. They love his policies. They have admitted, they love his policies and they agree with pretty much everything he’s done except maybe the tariffs. And I think that’s the, that’s the ulterior motive with these tariffs. Every consumer in the United States loses money on pretty much everything we buy. But you know who’s losing more money or the wealthy people, the wealthy elite, they’re losing a lot of money because the stock market keeps tanking every time Donald Trump says the t word and he’s been saying it a lot. Stock Market’s been dropping a lot. Rich people are losing money.

They got their tax break, they’re billions upon billions of dollars, but now they’re starting to lose some of it because of the trade war. And that’s what set these Republicans off. Make no mistake about it. Any other Republicans sitting in that Oval Office today would have tried to kill the affordable care act, would be probably locking kids in cages would have passed that Republican tax cut, would have put horrible judges in courts all over this country. The only thing they may not have done is put those tariffs in place. And of course they wouldn’t be an international embarrassment to the country and they wouldn’t be out there bullying and making fun of and coming up with cutesy little nicknames for their political opponents on Twitter. They’d all have a little bit more class even if deep down they were horrible human beings. So on the one hand, I guess I’m glad that somebody in this country finally took a little bit of initiative to create an ad like this, but on the other, I’m extremely pissed off that it’s being done by horrible people with ulterior motives who are not going to change any of the policies that the president has put in place.

The Democrats should have done this, but as they typically do, because we’ve got shitty people in leadership, they’re going to sit back, let Republicans capture the narrative, and suddenly that party gets to be the heroes for everyone who wants to see Trump gone.