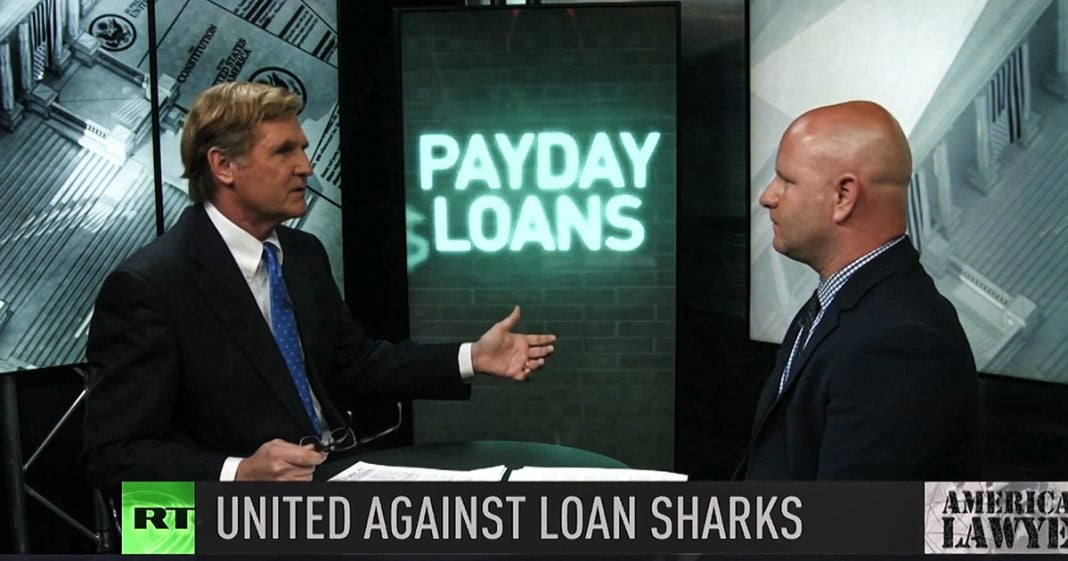 Via America’s Lawyer: Mike Papantonio and Trial Magazines Editor Farron Cousins discuss how the Loan Shark Prevention Act proposed by Senators Alexandria Ocasio-Cortez and Bernie Sanders has earned support among voters regardless of party lines. The act would cap interest rates on credit cards and loans, combatting the predatory nature of loan sharking, which targets Americans that have few financial options.

Mike Papantonio:             Believe it or not, there are more issues than you think that unite both the left and the right and taking on Wall Street greed happens to be one of them. I’m not so, I’m not so sure that the Republicans really are concerned about corporate greed, but whatever has happened here we, we see, we see this developing where you have Bernie Sanders and Elizabeth Warren and AOC, they’re all, they’re all out there saying, look, we need to do something about corporate greed in the way that they were involved with loans.

Farron Cousins:                  I think this is interesting. Right now we see about 70% of Republicans, 73% of Democrats who all say we agree with this new plan that the Democrats have come forward with to cap credit card and payday loan interest rates at 15%, you cannot go above 15%. Prior to the 1980s we already had caps as a country on interest rates. You couldn’t charge more than x amount. Reagan came along with deregulation. Bill Clinton came along with it. We got rid of the caps. They went crazy with it. Right now, even for somebody with really excellent credit, your interest rate’s about 21% I believe, as of last week.

Mike Papantonio:             Let me tell you what strikes me about this story. Finally, the Democrats are talking about something important. They don’t have this, they don’t have this Schiff psycho, this guy that all he had, all he knows is his conspiracy babble. All he knows is Trump hate. Maybe, maybe the Democrats finally understand that when you talk about important issues, you can bring in both sides. When you stop talking about conspiracy and hate Trump, look, there’s plenty of people that hate Trump.

We’re tired of hearing it. The conspiracy, Russia, the Russia conspiracy, come on really? And so and so you’re going, but you still have, what did they call him? Pencil neck Schiff. The, so you’ve still got this character out there, Schiff, talking about these issues. On the other side, you’ve got AOC, right? You’ve got Elizabeth Warren, you’ve got Bernie Sanders out trying to talk about real issues that maybe can help the Democrats win an election. Take it from there.

Farron Cousins:                  They’re, they’re out there talking about things that directly affect somebody’s wallet, their personal bank account, whether it’s Republican or Democrat or whatever it is in between. They’re out there saying, listen, this isn’t a partisan issue. This is a thing that affects a Republican’s ability to take care of their family. It affects a Democrat being able to take care of their family, and that’s who people want to hear. They want to hear, say, hey, this person has a policy. Okay, they may be a Democrat and I’m a Republican, but it’s a good policy that would directly benefit me. Somewhere along the lines in the last 40 years, we got away from that. Politicians stopped offering policies.

Mike Papantonio:             Look, here’s, here’s the truth. Over the most of the 20th century, you had, 20th century now, you had caps. You had say you can’t, you can’t get past this point, when you go charging. And then all of a sudden there was deregulation. And when deregulation took place, all of this bad stuff started occurring. You know, Wall Street stole from mom and pop. The economy crashed. You know, people were charged 80% sometimes on, on credit cards.

So, I mean, you know, you’ve gotta, you gotta say we’re in a different time. Maybe the Democrats will get the, get the message, start talking about table talk, dinner talk instead of social issues and crazy Schiff conspiracies, and maybe they’ll accomplish something. Farron, thank you for joining me. Okay.