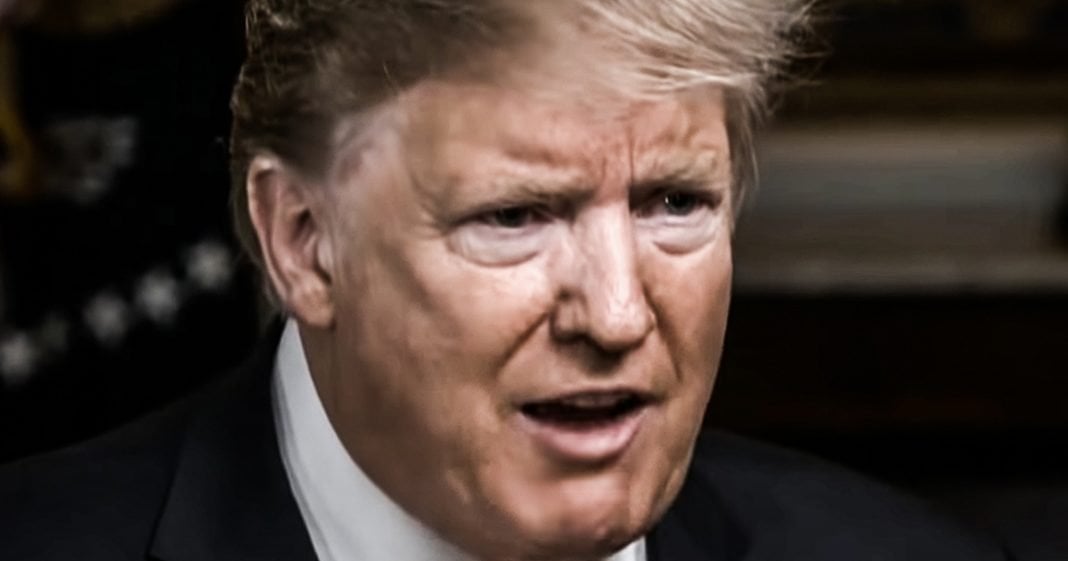 A group of mental health professionals have written an op-ed claiming that Trump could and should be removed from office simply based on the fact that he is mentally unfit to serve as President. This is a sentiment that has been echoed by more than 100 mental health professionals over the last two years, and it is one that needs to be treated seriously. Ring of Fire’s Farron Cousins discusses this.

Recently, several different mental health professionals pinned in op-ed featured in the USA Today. Find a link to it in the description of this video if you want to read it for yourself. But basically they outlined the fact that Donald Trump’s meeting last week with Nancy Pelosi and Chuck Schumer, where he sat there for three minutes, they wouldn’t give into his demands. So he stormed out and through his little temper Tantrum, and then he threw the temper tantrum because people said he threw a temper tantrum and blah, blah, blah, blah, blah. But they actually point to that one specific event telling us that this is the kind of thing that one, the founding fathers said, if somebody does this crap, you can impeach them. And to the 25th Amendment says, if somebody does stuff like this, you need to remove them from office specifically as defined by the 25th amendment. These, uh, mental health professionals say if someone is unable to discharge the powers and duties of his office, which means if you simply refuses to do his job, you can remove him by the 25th amendment.

And that’s what Trump did last week with Pelosi and Schumer. He refused to do his job. He didn’t want to talk about infrastructure, which is sorely needed in this country. He didn’t want to make a deal. He wanted what he wanted and he didn’t get it, so he took his ball and went home. In fact, actually he went to a podium outside that was already waiting for him with a list of false statistics on it about the Mueller report. So even based on that one incident last week, these mental health professionals, psychiatrists and psychologists and other professors are telling us that that shows this man is not fit to do his job. He doesn’t want to do his job, and the founding fathers gave us multiple different remedies to get rid of someone like this. Now, this falls in line with what hundreds of mental health professionals and thousands of others in the mental health field have been telling us for over two years now.

In fact, I think last count was 70,000 signatures from people working in the mental health arena across this country saying that Trump has to be removed from office because he is not mentally fit to be the president of the United States. Now to me, if I were to hear something from someone who spent their entire life learning about diagnosing and working with mental illness, I would take their opinion very seriously. Much like we do, or at least Democrats do with climate scientists, right? These other mental health professionals, these doctors, they’re also scientists. We need to listen to them. So at this point we could move forward with an impeachment hearing just based on the fact that Trump refuses to do his job. And that also does fall in line with get rid of him, get him out of office. We have plenty of mental health professionals who I’m sure would be more than happy to come testify on Capitol Hill and tell us what a, hmm, I don’t want to use that word, but tell us what kinds of problems the president’s actually dealing with.

Is it textbook narcissism that prevents him from working with others? If so, grounds for removal. Is it a full blown psychopathy? Quite possible, but they’d be able to give us, give us a better assessment of the president. My point is this, while everybody’s out here arguing right now about whether we can impeach him for these crimes, or should we wait for these crimes, or should we focus on the banking crimes? How about this? First and foremost, lump all the crimes together in multiple different articles of impeachment. And then the icing on top that the public really needs to be aware of is the fact that mental health professionals from more than two years have been telling us that this man in the Oval Office right now, Donald Trump, is a threat to the office, a threat to this country and a threat to this planet, and he needs to be removed.