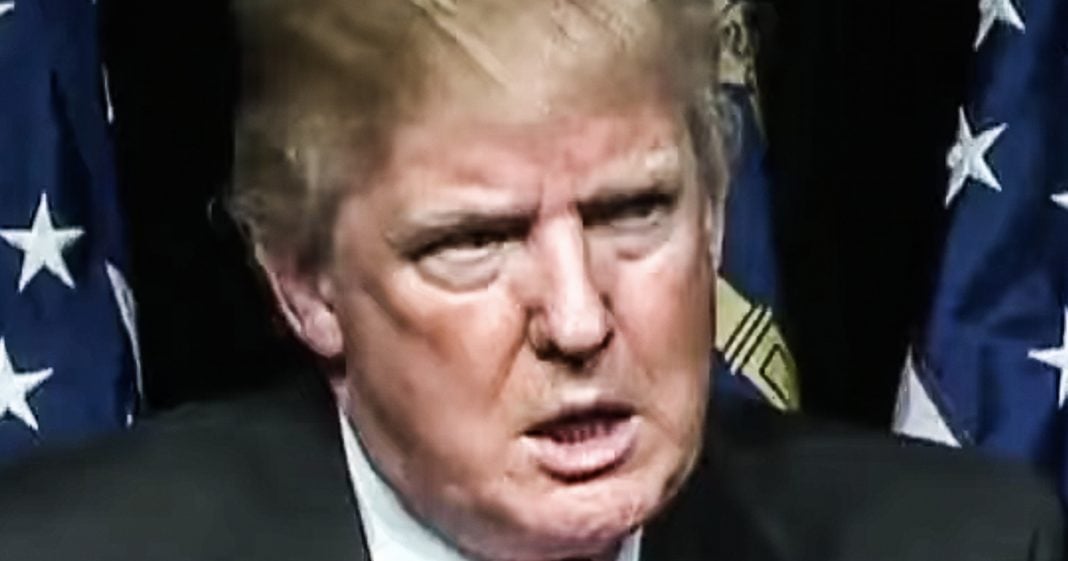 Last week, Donald Trump grew furious over the fact that Nancy Pelosi said that he was furious during their infrastructure meeting. He then forced his staff to tell the press how calm he really is. But last year, a White House staffer admitted that the President yells at his staff for telling the media that he yells at his staff, apparently completely unaware of the irony. Ring of Fire’s Farron Cousins discusses this.

You know, Donald Trump’s weird press conference a week ago is still bugging me a lot. I don’t know that I’m actually fully stopped thinking about it because it was so weird. I’m talking of course about the press conference where he announced his $16 billion bribe to US farmers to make up for screwing them over with this trade wars that instead devolved into him forcing his staff members to go around and say how calm and cool and collected he is. This was obviously in response to Nancy Pelosi saying he had thrown a temper tantrum the day before and they’re meeting when he stormed out and Golly, gee, Trump hates it when people say that he’s angry, but it’s not just about that one particular incident and it’s not just about him making people go around and tell reporters how call me is. There’s a pattern that has emerged. Donald Trump and in fact last year, the daily beast reported the following few recurring characterizations bother president Trump more than the largely accurate narrative that he has a hair trigger temper behind the scenes and that he could easily and frequently be sent into vulgar. Sometimes volcanic hissy fits when he doesn’t get his way in the middle of last year.

2018 Trump wants sat in the White House and angrily listed various words in headlines and cable news. Chiron’s he’d seen recently that described his mood, fuming, raged, furious, and so forth, decrying them as inaccurate reporting according to a source who was present at the White House. The president’s sounded increasingly irate as he rattled off headline after headline, the source said, okay, noting the irony. So Donald Trump is getting pissed off that everybody keeps saying that he’s pissed off and he’s getting pissed off at his aides for telling the media how pissed off Donald Trump always is. Now, what Donald Trump doesn’t understand is that it’s okay, right?

If you’re not being violent or degrading to people, sometimes it’s okay to just be mad, right? Be Angry sometimes. Oh, reporting’s inaccurate. I am mad. As long as you’re not psychologically or physically abusing anybody else or blaming them for it, it’s okay to feel your feelings bud. Open up, share with the group, shall we?

Cool, but your anger at these people for telling the truth about what’s happening behind the scenes that the White House is misplaced. If you don’t like people thinking that you’re angry, work on your anger issues. You know they have some great meditation apps out there that you can download. We know you’re always on your phone. Try downloading one of these. You’ll take a quick five minutes session, work on your anger issues. Take a few deep breaths, count the 10 if you have to, but calm yourself down. Honest to God, it’s really not that hard. I’ve actually started doing that and it’s made a huge difference and I’m a lot happier now. I advise you to do the same thing, but as long as you keep blowing up at people behind the scenes, they’re going to keep telling the media that you keep blowing up and people behind the scenes and it’s only gonna get worse for you from there.

The more you storm out of meetings, the more likely it is people are going to say that you’re storming out of meetings. The bottom line is this. I know you’ve got a big ego, but if you don’t like the way that people see you, that’s on you. If you want people to see you in a different way than you as a human being, have to present a different side of yourself for them to see, because until then you’re going to constantly be the angry, raging person who sits in his lazy boy all day long, tweeting angry things about Fox News. You want them to see you as a happy go lucky, carefree guy. Then that’s the side of yourself. You have to show them instead of the angry yelling guy who thinks everyone around him is an idiot because he himself, you are too stupid to realize that you’re the one that doesn’t know what he’s doing.