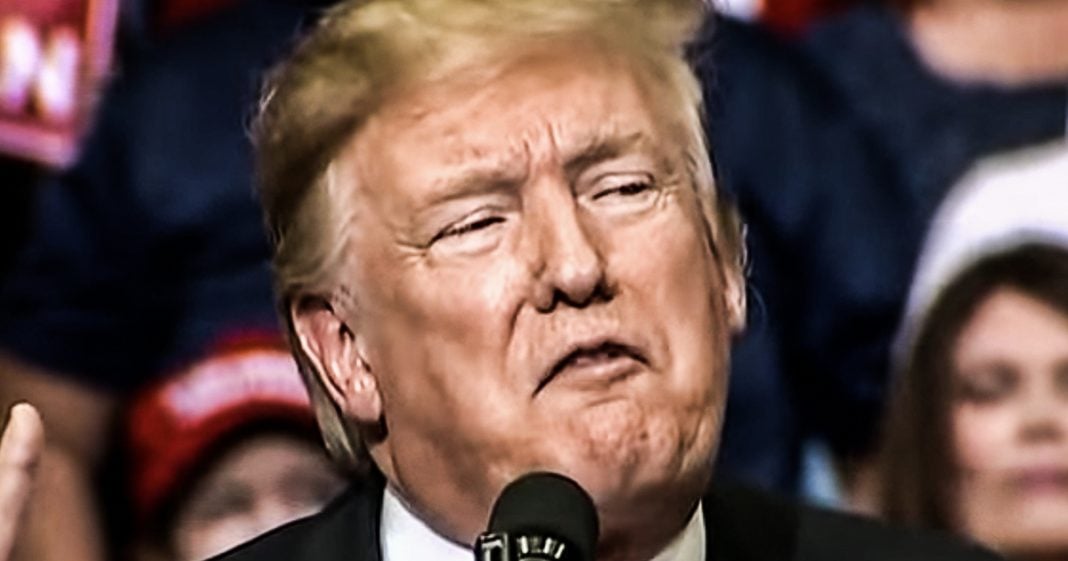 Recently, Donald Trump suggested (not for the first time) that the libel laws in the United States needed to be changed. He’s mad that people make fun of him on Twitter, and he’s always holding his grudge against the media who he claims are “fake news.” But he doesn’t realize how screwed he would be if libel laws changed because he’s one of the most libelous people in this country. Ring of Fire’s Farron Cousins discusses this.

You know, there’s no question that George W. Bush was absolutely a horrid human being and horrid president, possibly the dumbest president we’ve ever had. Definitely the worst president so far that we have ever had. But there’s one positive thing and you say about him, the dude didn’t have thin skin, right? I mean, the media, the Comedians, the late night host, Saturday night live pundits all over the place, made fun of this man called him names. There were books of bushes, Adams of just the stupid words he missed pronounced, but he never let it get to him. He would actually go out there and joke along with it sometimes, but Trump, oh hell no. Nah, you make fun of him. You say something mean about him. And suddenly that psychopath is saying that we need to change libel laws in this country so that nobody can be mean to him ever again.

He has said that multiple times since he became president of the United States, most recently, just a few days ago. And here’s the backstory on that one. Ian Bremmer, uh, Nyu professor, this was during Donald Trump’s a trip over to Asia. He tweeted up the following, he said, Trump and Tokyo, Kim Jong Un is smarter and would make a better president than sleepy Joe Biden. This quote was made up by Bremmer and Bremer made it up on purpose to see whether or not people would actually believe it was something Trump said. Because prior to this, Donald Trump claimed that Kim Jong UN called Joe Biden, a low Iq individual. He said, the Prime Minister of Japan said, the Democrats just want to see Republicans fail. They want to see America fail, neither of which I believe actually happened. Those are things Trump has repeatedly said. So the likelihood of world leaders using the exact same language that he uses is slim to none.

So Bremmer comes out with this quote, it was fate totally made up. And uh, he admitted that afterwards, after it blew up because he said, you know, hey, I wanted to see what would happen here. I wanted to see if people would actually think this was something Trump would say. And they did. And it almost is right on cue with what Trump actually did say. So Donald Trump got mad and tweeted out the following. Ian Bremmer now admits that he made up a completely ludicrous quote, attributing it to me. This is what’s going on in the age of fake news. People think they can say anything and get away with it. Really, the libel laws should be changed to hold fake news media accountable. We’ll be careful what you wish for big guy. Because if you were to change the libel laws in this country, do you know what would disappear?

Instantly? Literally all conservative media see, libel laws are actually very complicated. And to boil it down to its most basic thing, yes, you can be held liable for libel as long as you are liable, causes financial distress or harm to another individual. If it does not meet those standards, you can’t do anything about it. Unfortunately. Very Sad. But that’s the way it is. And Trump doesn’t like that. He knows that he sued many people for this, but uh, he wants to change it to where basically if somebody says anything that’s not true, suddenly you can sue them. And my God, Fox News, if he changes these laws, you guys better lawyer up, cause I’m pretty sure actually I’m 100% sure. According to the most recent media matters report, literally every single host on your network would be sued or depending on how Trump changes the libel laws thrown in jail.

So there goes your entire staff of on air talent at Fox News gone. If we change the libel laws to where if you say something untrue, you’re done. Uh, daily wire, daily caller, Breitbart, Info wars, zero hedge, all those folks are suddenly gone as well, sued into oblivion. Rush Limbaugh could by Ann Coulter, Sia, Tomi Lahren, Ben Shapiro, Charlie Kirk, Candice Owens, sorry guys. All you do is lie all the time. And now if your guy has his way, all you’re going to do is be sued all the time. That’s not going to be a good thing for conservative media, but don’t worry folks, because it’s not just conservative media that’s going to feel the staying. If we change the libel laws, it’s also going to be the president himself. Because how frequently does this man lie about other people? I mean, how we already mentioned one, the low Iq individual Joe Biden, Joe Biden has many things, many things that I don’t like. Low Iq is not one of them. He said the same thing about Maxine waters. He has made other disparaging and potentially defamatory comments about his political rivals. You know, saying Obama wire tapped him. Well, that’s not true. I guess we have to sue Trump for that, that Hillary Clinton conspired with the Russians. There’s no evidence whatsoever to suggest that. I guess we have to sue him. If Trump seriously wants to change the libel laws, which again, he has said multiple different times, it’s going to end much worse for conservatives than it is for liberals.