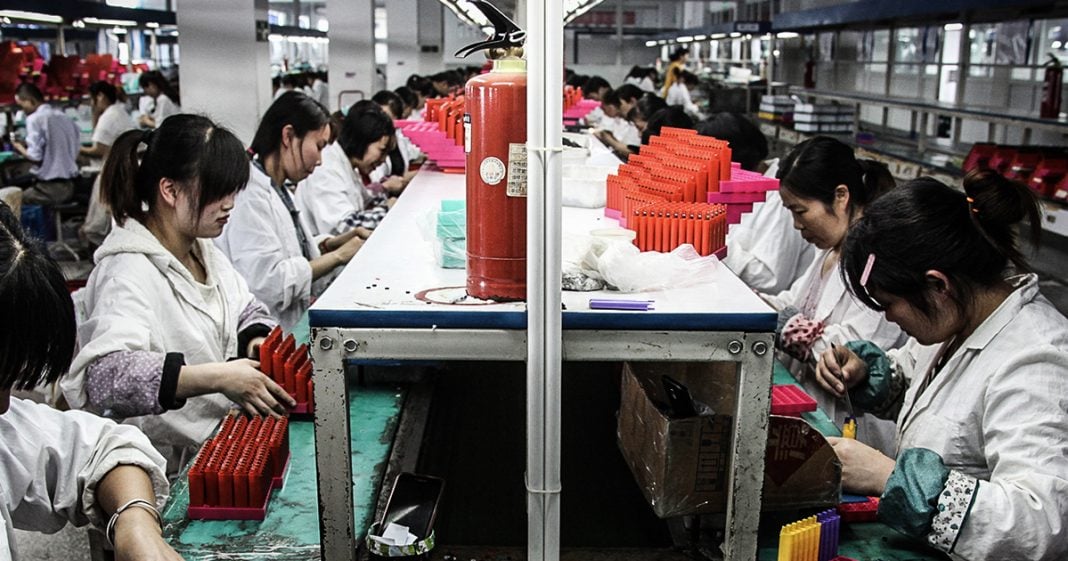 Donald Trump and the Republicans like to blame countries like China, Mexico, and others of stealing American jobs, but the truth is that these jobs are being given up willingly by American corporations who want to exploit cheap labor. This has been happening for decades, and Trump himself has benefited from this system. If we want to bring back our jobs, we have to go after the corporations who are sending them away, as Ring of Fire’s Farron Cousins explains.

Earlier this week, Cody Cane, writing on salon.com, put forward one of the best articles that I think I’ve run a very, very long time. This article’s titled, No, Mr President, China didn’t steal our jobs. Corporate America gave them away. And this is actually something that I, I was really surprised to read because it’s something I’ve been thinking for a very long time. You know, we have Trump and the Republicans and hell, even some Democrats out there saying that China’s steel and American jobs before that, remember it was Mexico stealing American jobs. You know, you’ve got all these other Asian countries stealing American jobs as if they’re somehow coming over here. You know, put their little ski masks on, break into Ford or carrier and steal our jobs. Well, that’s not what happened. And Cody Cane, writing for salon.com, explains it. He says they didn’t steal anything. What they did was accepted gift, a gift that was legal, a gift that was technically proper. What the gift was. American corporations reaching out and saying, can we build factories over here in your country? Please. Thank you. We’ll put your people to work. You know, you, you’ve got an unemployment problem, we’ll fix it for you. They can come work for us.

And it’s not just China again, happens in Mexico, happens in further Latin America, happens in Asian countries all over American corporations reaching out saying we want to go to a different country because your labor laws a little or a little more lax. We didn’t, we don’t have to pay our workers decent wages over in your country. We do over here we don’t have to worry about things like you know, worker safety and hardhats and goggles and all that crap that costs us money. Uh, in your country. We have to worry about it over here. So we’ll come to your country, will employ your people, will put money into your economy. All we ask is that you kind of go easy on the labor laws and that is exactly what happened. That’s exactly what’s been happening for decades in the United States. It didn’t start under Donald Trump. It started decades ago. But the reason it’s still happens today. The reason we saw corporations just last week again, lay off hundreds upon hundreds of white collar workers, decent, good, uh, upper middle class jobs gone last week alone is because they want to send them to other countries. We want to put our call centers over in India, you know, and pay those people pennies on the dollar. We don’t want to do that here in the United States.

There has to be some kind of punishment. The CEO’s and the shareholders is Cody cane pointed out, they’re the ones who are making more money than ever now because they’re able to ship our jobs overseas and pay less in wages, not have to pay for workplace protections. All that extra money saved goes into the pockets of those people. American workers get laid off. They have nowhere else to go. They have to take a lesser job and hope that that one doesn’t also get shipped overseas. The corporations are the ones that need to be held accountable. We have to stop blaming. China stopped blaming Mexico, and we have to look at the real villains in this story. In the villains are the corporations, and Trump can get out there on Twitter. He can talk about it on stage. All he wants that he’s being tough against China for stealing our jobs, but he is 100% part of the problem.

After all, where’s Donald Trump’s garbage made? It’s made in China. Where does Donald Trump get all the workers for his golf resorts? He brings them in from Mexico on, you know, seasonal visas and then so ships and back after the season’s over, he’s part of the problem. He’s not using American labor. He’s not keeping his crap here in the United States to be built here by Americans for Americans. He is not hiring Americans, don’t work at his clubs. So yeah, next time he says corporations, or excuse me, China or Mexico, or stealing our jobs. No. People like him are willfully giving those jobs to those countries because they think it’s going to mean that they get to keep more money for themselves.