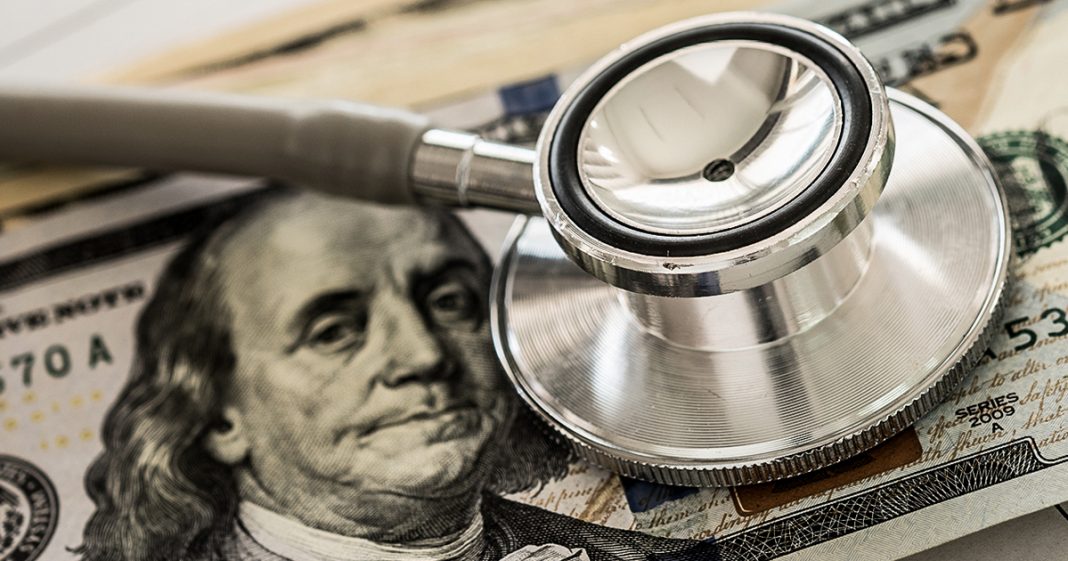 According to a new report, more than 24 million Americans who receive employer-sponsored healthcare coverage are still unable to pay all of their medical bills, showing that even WITH insurance the system isn’t working. Millions are paying for a service that doesn’t do what it is designed to do, and it is driving us to bankruptcy in droves. Ring of Fire’s Farron Cousins discusses this.

Most people in this country who have health insurance actually get their health insurance from their employer. Employer sponsored healthcare coverage, uh, has been around forever. Most of us have it, but here’s a shocking number for you. More than 24 million people in this country say that even though they have quote good private healthcare insurance provided by their employer, they’re still unable to afford adequate medical care. 24 million people say it’s still too much and I can’t afford it. So we skipped going to the doctor. We skipped doses on our medication. We skipped filling prescriptions entirely because we simply can’t do it even though we have good healthcare insurance. To put that in perspective, 24 million who say they can’t afford it, even though they have insurance, that’s actually more people than got insurance under the affordable care act. Under Obamacare, 66.5% of all bankruptcies here in the United States are due to medical costs and medical procedures that cause people to miss work.

They end up in bankruptcy. 66.5% of all bankruptcies related to some kind of health care cost. Over half a million people per year in this country are filing for bankruptcy. I think it’s 550,000 people filing for bankruptcy because of medical costs. And I want to put this in a little bit more, a personal perspective here before I sat down here, started going through looking at how much I personally pay for health insurance every single year and every single check out of every single paycheck I get $199 and 78 cents is taken out, paid biweekly. So every other Friday I am paying $199 and 78 cents for my health insurance coverage. That covers me, my wife and my children. That comes to $5,194 and 28 cents per year. And that’s just the part I pay my employer, uh, from what I’ve told actually pays 75% of my personal premium as well as everybody else in this a office here. So I’m only paying 25% of it. So by that logic, by those numbers, that means that my grand total cost for health insurance for me is a little more than $20,000 per year and I’m having to pay 5,000 of that. On top of that, I have a $6,000 deductible. So out of pocket costs from me on a bad year would be $11,000 normally I do not hit that deductible, but this year I’m almost halfway there.

My inhaler that I have is $250 a month. My daughter’s asthma inhaler is $250 per month. Other medications that my daughter has to have add up to more than $300 per month. So as it stands right now, I’m at almost $1,000 per month just on two people’s prescriptions. Well, I also have a son and my daughter who have peanut allergies, so twice a year I have to buy each of them an epipen. They expire every nine months, so they make you buy them twice a year. There are $650 a piece, so $1,300 at the beginning of the year, $1,300 around August when they go back to school so that I make sure that they do not expire before the end of the school year. So that’s $2,600 a year that I personally spend just on epipens. Almost half of my total deductible and I have got really good health insurance or at least on paper it says it’s really great health insurance. It’s not we have the worst healthcare in the world.

Yeah, maybe not statistically, although we are actually close to the bottom. Um, but personally I can tell you that because it sucks. Everything about the American healthcare system today sucks. This is why things like Medicare for all are so important. This is why policies and proposals to lower prescription drug prices to rein in the cost of medical procedures and doctors appointments and everything like that. That is why that is so important. I can only speak from personal experience, but I can also look at the statistics and realize that I’m not alone. I may not even be in the minority on this at this point folks, cause I know a lot of people watching this right now, Kimberly, late to everything that I have said, and that is why this democratic primary is so important. There is no way in hell I would ever throw my support behind any candidate who does not. 100% support Medicare for all and price controls on pharmaceuticals and medical procedures. That’s the other part of it. Because Medicare for all, yeah, that’s great. But if you don’t control the costs as well and we’re still having to pay out of pocket, that’s not okay. I don’t mind. I wouldn’t even personally mind having a Medicare type plan that I had copays for, you know? Yeah. I’ve got to pay a couple bucks to go to the doctor here, a couple of bucks to go fill a prescription here.

I think most people would be okay with that, but there would still be people in this country that couldn’t afford it. Therefore it’s not good enough. This has to be a plan and a that covers every single person in this country to where none of them ever have to worry about going into bankruptcy or missing a dose because they can’t afford it. Anything short of that is 100% on acceptable.