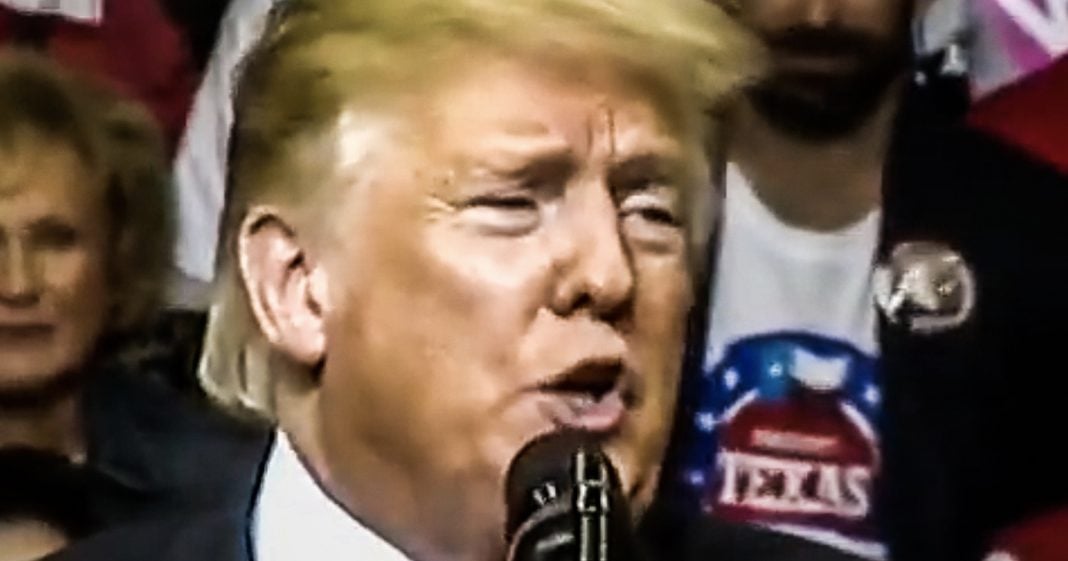 Donald Trump has announced that he is putting a blanket 5% tariff on ALL goods coming from Mexico to the United States because he claims that Mexico isn’t doing enough to stop people from crossing our border. These costs will be paid by American consumers, and they could be the final straw that tanks our economy – something economists have become increasingly convinced will happen. Ring of Fire’s Farron Cousins discusses this.

Donald Trump is determined to tank the US economy by any means necessary. On Thursday, he announced that he was going to be putting a blanket 5% tariff on every single good coming from Mexico to the United States starting on June 10th because he’s pissed off that Mexico’s allegedly not doing enough to stop people from crossing the Mexico border into the United States. Now, what spurred this was at the other day, Donald Trump tweeted out a video that allegedly showed up to 1000 people crossing the border, uh, near El Paso coming into the United States. He was infuriated. He was angry. He tweeted this out. He yelled about the Democrats. But what he didn’t tell us was that these people that crossed the border immediately surrendered. They were all apprehended, taken into custody, and that was actually their plan. They didn’t come over here to sneak through. They wanted to come over, probably asylum seekers.

We still don’t have confirmation on that, but they just wanted to be processed so that they could start going through the legal channels to become US citizens or to get asylum. None of them killed anybody. None of them stole anything other than crossing the border, which is a misdemeanor. They didn’t break any laws, but Donald Trump became so infuriated by that that he has no problem tanking the entire US economy because he hates immigrants so much or because he wants us to think he hates immigrants so much. Let’s not forget his businesses all around this country have been known for decades to hire undocumented people and people here on a temporary work visas for the season. He doesn’t like hiring American workers. He loves the higher people coming in so we can pay them lower wages. But in order to win reelection, he’s got to show that, hey, I really hate immigrants.

But again, all that’s beside the point right now cause this 5% tariff is going to increase prices for us consumers because again, like with the other trade war, we’re going to be the one paying the costs here. Automobiles, oil, aluminum, anything made out of aluminum beers, steel, fruits, vegetables across the board. A 5% increase right on top starting June 10th and Trump doesn’t seem to care, especially because his plan is if they, Mexico has not done anything to stop the illegals from coming over here by July 1st that 5% jumps to 10% and then for the next three months after that, on the first of every month, hey, if they have not made progress, it’s going to increase by 5% until he gets all the way up to 25% tariff and then he leaves it at that. The stock market over the last week, even before any of this even came to fruition, the stock market has been declining going down mostly because of Donald Trump’s trade war with China. It tanked today. Expectedly predictably because of this new tariff, but again, US consumers are going to be the ones who get screwed and we’re going to get screwed again because Mexico has vowed to retaliate against us. They have been doing an exceptional job actually according to statistics of apprehending people before they crossed the u s border. So they are doing what they should be doing according to Trump, but he’s still so pissed off about that video.

He tweeted out the other day that he is willing to sink the entire US economy for payback. I guess none of this really makes sense. Not to mention the fact that economists have been warning us. In fact, we got even more warnings just this week from economists in the u s that we’re headed towards a recession. That as we’ve been saying, we have an economy built of Straw that is about to come crashing down at the slightest provocation. The trade wars have already made that straw start to crumble and these new tariffs on Mexico could be the final thing that makes our entire economy come crashing down.