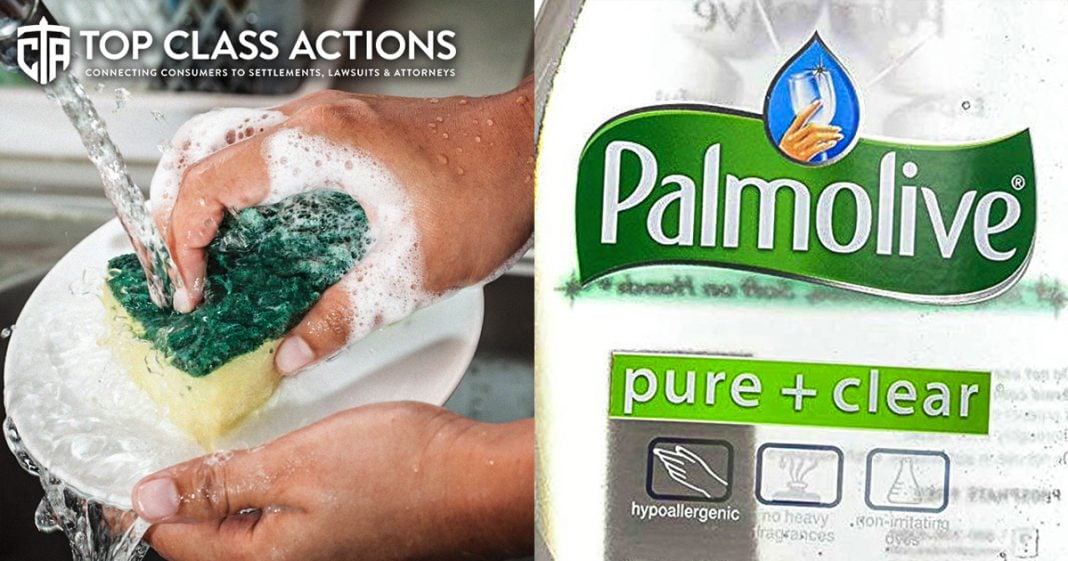 A class action lawsuit says Palmolive Pure + Clear liquid dish soap contains harsh chemicals, contrary to its advertisements. The Palmolive class action alleges Livingstone understood these claims to mean that the product was “free from ingredients known to be skin allergens and/or skin irritants, and without any unnecessary ingredients that increased the likelihood of an allergic and/or irritating response.” Ring of Fire’s Farron Cousins discusses this with Scott Hardy from Top Class Actions.

Farron Cousins:                  Most Americans understand the fact that we use pretty harsh chemicals on a daily basis and for the last few years we’ve been trying to eliminate as many of those chemicals as possible. We’re turning towards greener products, products made from plant based materials. Whatever we can do to try to cut out some of these chemicals with names that we can’t even pronounce. Unfortunately, corporations understand that we want pure natural products, so they’re slapping that pure natural label on whatever they can and as usual, that’s going to spark plenty of class action lawsuits.

Joining me now to talk about one of the latest examples of this is Scott Hardy with Top Class Actions. Scott, the scenario I just laid out, obviously people want natural pure ingredients. They don’t want something that’s going to be harsh on their skin or in their body. Palmolive, from the Colgate company said, okay, you know what, we’re going to offer you this soap, Pure and Clean, is what we call it. It’s clear, doesn’t look like it has anything harmful in it, but the class action lawsuit that has now sprung up says you’ve got all kinds of harsh chemicals in here that are really irritating to the skin. They’re bad for your skin. So lay this one out for us.

Scott Hardy:                          Sure. So the Palmolive Pure and Clear soap class action alleges that it does contain skin, skin irritants. In fact it contains a skin irritant that was the named the contact allergen of the year in 2013 by the American Contact Dermatitis Society. So woo hoo, good on you for winning that award there. Now the, the chemical in question here is a great big tongue twister. It is methyl, let’s see if I can say it here, methylisothiazolinone.

Now I will only say that once, we’ll say it’s MI and this, this, that is the ingredient that was named the contact allergen of the year. And as you stated, you’ve got this soap that people are buying. They’re thinking that this is going to help them out if they’ve got allergies, if they’ve got dermatitis or severe dermatitis, that they can use this soap and they won’t have problems. But unfortunately it appears that’s not the case.

Now this, this ingredient is in a lot of different soaps, so you’re seeing this elsewhere. But I believe the crux of this class action is that it’s not specifically called out on the label up front, even though it is called out within the ingredients. So if you’re looking at the ingredients, you’ll see it. But what you see on the front label of this soap is that it is pure. It’s clear, you’re less likely to have any problems with it and that’s why this class action was filed. People aren’t being made aware that the contact allergen of the year of 2013 is in the soap.

Farron Cousins:                  Right, and one of the biggest issues too is that Palmolive is marketing this soap as hypoallergenic. You know, not necessarily advertising it as, hey, we have the most, the biggest allergen of the year in this particular soap. And it’s something we’ve seen kind of develop, you know, over the last 10, 15 years, which is really interesting. Scientists still trying to figure out why, but people today are becoming more and more allergic, you know, to chemicals, to products, to you know, peanuts for God’s sake.

You know, all kinds of things across the board our allergens are kind of going haywire. Scientists still aren’t 100% sure, but that is why you have more and more people who are trying to go for these hypoallergenic products. This isn’t going to irritate my skin. I’m prone to hives or rash or blistering. And yet all of those things that this soap is supposed to prevent, this lawsuit is saying it’s actually causing them, I mean the list here, rashes, blistering, swelling, redness and hives is what can be caused because of this chemical in there.

Scott Hardy:                          Exactly. I mean so far we’ve received more than 226 comments from people that are wanting to be included on this class action. So there are a lot of people out there that are stated that they are having issues. That they bought this product thinking that they wouldn’t have any issues with it. That it would be hypoallergenic when in fact it appears, at least from this class actions allegations, that that’s not the case.

Farron Cousins:                  This is obviously a very popular product. I’m sure a lot of people probably have this in their kitchens right now. It’s something you use. If so, go check it out. See if this is the product you buy, and then after that, follow the link in the description of this video. Go to topclassactions.com. Get all the information you need to about this particular case, and while you’re there, sign up for their weekly newsletter. It is one of the best ways to arm yourself with the knowledge that consumers need to be aware of. Scott Hardy with Top Class Actions. Always a pleasure talking to you.