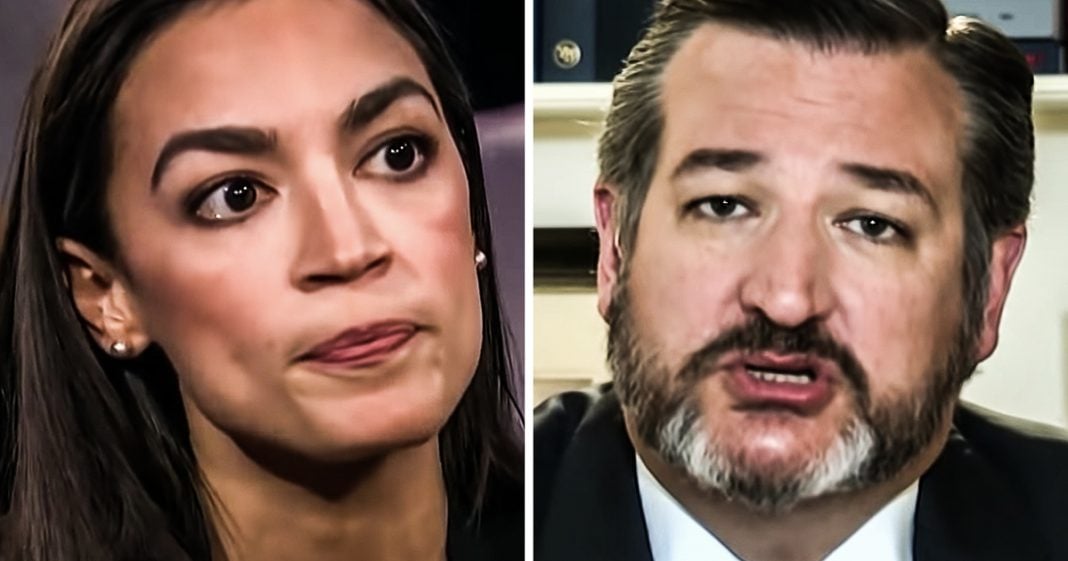 In what may seem like the most unusual alliance ever, Alexandria Ocasio-Cortez and Ted Cruz seem to have found common ground on an issue and have teased a potential team up to take it on. The issue is the growing number of former members of Congress who immediately turn around and become lobbyists, something that we can all agree is bad for this country. Ring of Fire’s Farron Cousins discusses this issue.

Sometimes very weird alliances are formed in Washington DC and yesterday on Twitter. For those who were following the thread in awkward and dare I say weird alliance kind of formed and the alliance was formed between Democratic Representative Alexandria Ocasio-Cortez and Ted Cruz. Here’s what happened. Ocasio-Cortez was tweeting out about a recent public citizen study that showed that a 15 former members of the 2018 class of Congress, 15 former members have already turned around and become lobbyists to have actually started their own lobbying firms. We have 59% of the people who are no longer in Congress that were in Congress last year. 59% are now lobbyists. They’re meeting with the same lawmakers who used to be their colleagues, their lobbying on behalf of businesses. They have access that other human beings could never have access to. And AOC was talking about the fact that this has to stop.

We have to put a ban on this. Yeah, we have some like temporary bans in place in it has to wait two years. House has to wait one year, but they get around that by simply not registering as lobbyist an AOC says it has to end. And then Ted Cruz chimed in and said, I wouldn’t usually say something like this, but I agree with AOC on this. I myself have firstly called for a lifetime ban on former members of congress becoming lobbyists. Maybe this is an area where we can work together. Ted Cruz said an AOC seems open to that. And while I disliked Ted Cruz, I’m not going to lie. This is like the third time maybe that, uh, he has said something that even I agree with him on. Another one was congressional term limits and I forget what the first one was. Uh, but nonetheless, in fact, it may have been this issue. So maybe there’s only two, but nonetheless Cruz is, right? An AOC is right. And sometimes if that means taking somebody like AOC and having her work with somebody as slimy as Ted Cruz to get it done, sometimes that’s what has to happen.

I don’t think there’s many people in this country who would look at the fact that we have former members of congress becoming high paid lobbyists. Immediately after leaving office, few people in this country would look at that and say like, wow, that’s a good thing. I’m really glad. I’m glad that that’s happening now. The only people who’d be glad that that’s happening are the people who are actually currently doing it and getting those massive paychecks because they know who to talk to. They know where these people live. They have their phone numbers. It’s so easy for them to have access. And that’s the problem. Now, to her credit, Elizabeth Warren had actually already introduced legislation, uh, years ago to do this, to, to put a lifetime ban on former members of congress becoming lobbyists. So you can go ahead and add that to the column of Elizabeth Warren has a plan for it.

Uh, you also have Republican Representative Trey Hollingsworth, who introduced legislation back in February to put this ban in place. So what we see here is that we do finally have an issue where we have bipartisan support. We have Democrats that have put forward legislation. We have Republicans that have put forward legislation and we have two members of Congress right now speaking to one another saying, I think we can find common ground on this. That’s rare in politics today, but it’s something that is desperately needed in politics today. Nothing is going to get done unless of course you have some kind of democratic supermajority in some instances, especially like this, you’re going to have to get some Republicans on board to really make a change. Even if it is somebody as slimy and disgusting as Ted Cruz. This might be one of the Times where his friendship at least temporarily, could be beneficial.