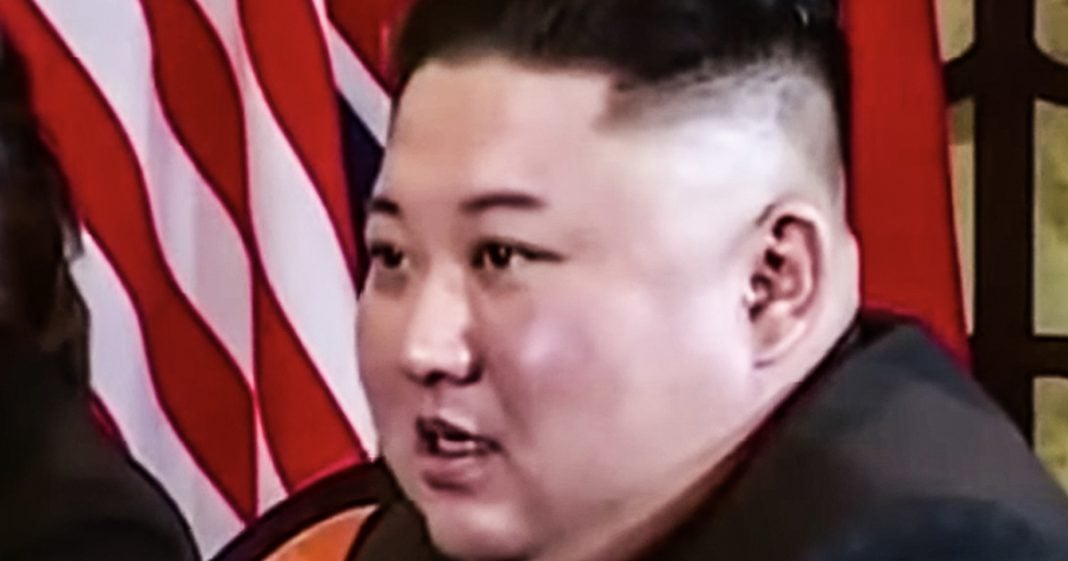 According to reports, North Korea has executed the members of the special envoy that accompanied Kim Jong Un to Hanoi to meet with President Trump in February. The murders allegedly took place immediately after the meeting at a North Korean airport. This news comes just days after Trump declared that he had great admiration for Kim and that he was a very smart leader. Ring of Fire’s Farron Cousins discusses this.

According to reports, the members of the North Korean special envoy who were present during the February meeting between Donald Trump and Kim Jong on have been executed by North Korea on Kim Jong Un’s order. They executed. They murdered the people who were there at that meeting because things didn’t go the way they wanted them to.

Now, according to the reports, these people had been accused by North Korea of actually being spies. Some of them had been accused of being spies. However, they were executed immediately following the meeting. So if they had thought they were spies, wouldn’t they have not taken them to the meeting or did they somehow learn in the few hours after that meeting occurred? Oh my God, suddenly these people are spies. Let’s kill them at the airport because that’s exactly what happened. They killed them at the airport in North Korea after leaving the summit. But don’t worry folks, because not all of them were murdered, right? I mean, we had one here, uh, who was just a subjected to forced labor and ideological reeducation and two others, the negotiator and the interpreter were just sent off to a political prisoner camp because allegedly they made a small mistake in one of their interpretations during the meeting.

So they’re off in the political prisoner camp. The other person is being subjected to reeducation. This is why no deal with North Korea will ever happen. They don’t want it to happen. And we’re dealing with a sociopath over there that is 100% what we’re dealing with with Kim Jong Un, you cannot negotiate with people like that. I mean, it is physically and mentally impossible to negotiate with a human being like that. Unfortunately, I don’t know. And this is something I’ve thought about and still have yet to come to some kind of conclusion. I don’t know how we approach this man. I don’t know how we remove him from power without causing tens of thousands or even hundreds of thousands of innocent civilians to die. I don’t even know that it’s possible to do that.

The US loves intervention. You know, we’ve never seen a country that we weren’t at least slightly interested in bombing, but that’s not gonna work with this. We can’t go over to North Korea and drop bombs. We can’t get engaged in a regime change war. But something has to happen in Kim Jong Un has to be removed from power. It has to be some that you know, send your seal team there to go and arrest him and take him to The Hague to be put on trial for crimes against humanity. Don’t send them over there to kill him, send them over there to arrest him, to apprehend him. You can’t tell me that we don’t have the technology and the fortitude to do something like that, but as long as this man remains in power, stories like this are going to continue to emerge. These people were murdered in February and here we are in the last day of May and we’re just now learning about it and they were murdered immediately following that meeting. And let’s also not forget that literally four days ago, Donald Trump described Kim Jong Un as a friend, as somebody he deeply admires as somebody who is a good leader and as somebody who is incredibly smart. Four days after those statements were made, we find out that this man, this dictator, murdered the very people who were in that same room with him and Donald Trump trying to allegedly work out some kind of deal for denuclearization. It’ll never happen. And Donald Trump is an absolute moron if he thinks he can work with somebody like Kim Jong on.