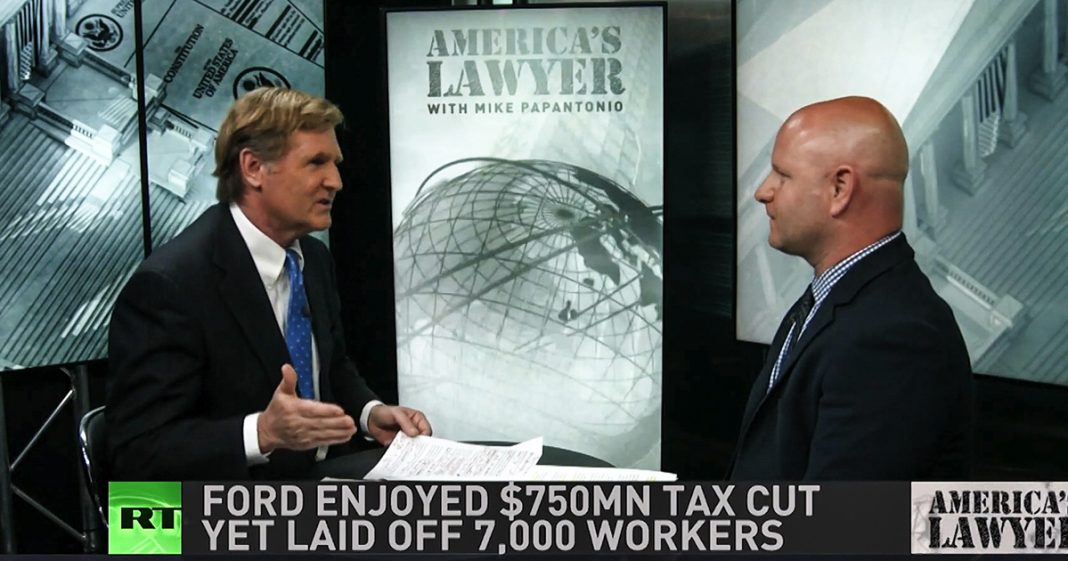 Via America’s Lawyer: Big Corporations promised that they would hire workers after getting a massive tax cut. But so far it looks like they’re pocketing all the money. Mike Papantonio and Trial Magazines editor Farron Cousins discuss more.

Mike Papantonio:             Big Corporations promised that they would hire workers after getting a massive tax cut. But so far it looks like they’re pocketing all the money. Didn’t we talk about how this whole, remember this was the talking points, Republicans, oh, this is going to be great. Tax cuts, we’re going to hire more people. We’re going to pay them more. Now, you look at just the opposite has happened. They’re pocketing the money, giving all the money to the CEOs and laying thousands of people off.

Farron Cousins:                  Ford’s a great example because last week they announced, hey, we’re, we’re cutting a few thousand jobs across the country. 500 of those in the US by Friday of last week. So 500 Ford jobs gone. This accompany, they got a $750 million tax break just last year. They’re going to pocket an additional $600 million from laying off all these workers. So we’re talking about a new net gain for the shareholders of Ford, over $1 billion.

And these are not, you know, low level janitors or anything like that, you know, minimum wage jobs. These are good, solid upper middle class, white collar jobs. And Ford said, hey, thanks for the tax cut. I think we’re done here. We’re going to get rid of some people.

This money, $18 million, just on Ford alone, $18 million went to the CEO because of the tax, tax cuts. At the same time they laid off, they laid off 7,000 people as you pointed out, and they made $750 million. Now that’s just Ford we’re talking about. There are many other companies, but we want, I wanted to use that as an example of how this has played itself out. We talked about the fact it was a big lie.

We all knew it was a big lie. We all knew the, the hyenas will always go after the dead carcass and the corporate hyenas are doing just that. And you know what I gotta tell you, if Trump was smart, he would say, you know what? You can try to do that, but you’re going to be punished by doing that. Add to that the story we did last year, $400 billion in offshore banks. Okay, add that to this factor. Add that to this factor.

Farron Cousins:                  Well, look what we’re looking at here is the corporations are always going to find a way to pocket more of the money, give less to the workers. AT&T is another great example. They got huge, you know, hundreds of millions from these tax cuts. They’ve cut thousands of jobs. You know, the, the examples are endless of what’s happening right now. And they do it because the only thing they care about is the money. And like you said, you’re never going to get them to stop caring about how much more money I personally, me can make.

Mike Papantonio:             They truly are. And look right now as we’re talking, there’s $400 billion offshore. That’s conservative number that, that’s a projected number. Now they, not only do they want these tax cuts, they want to move the other money offshore and then they want to negotiate with the government to bring it back in. Not at 21% tax rate, but at 3% and 4% tax rate. They did … How many times since you and I have been doing this show, how many times do you recall that coming up?

Farron Cousins:                  Oh, constantly. And not to mention the fact that they also want to do like full tax holidays where they can bring it back in and pay nothing.

Mike Papantonio:             Okay. That’s the ugly thing about it is they get away with it. So I don’t know. Nothing really changes here and I don’t think anything’s gonna change here.