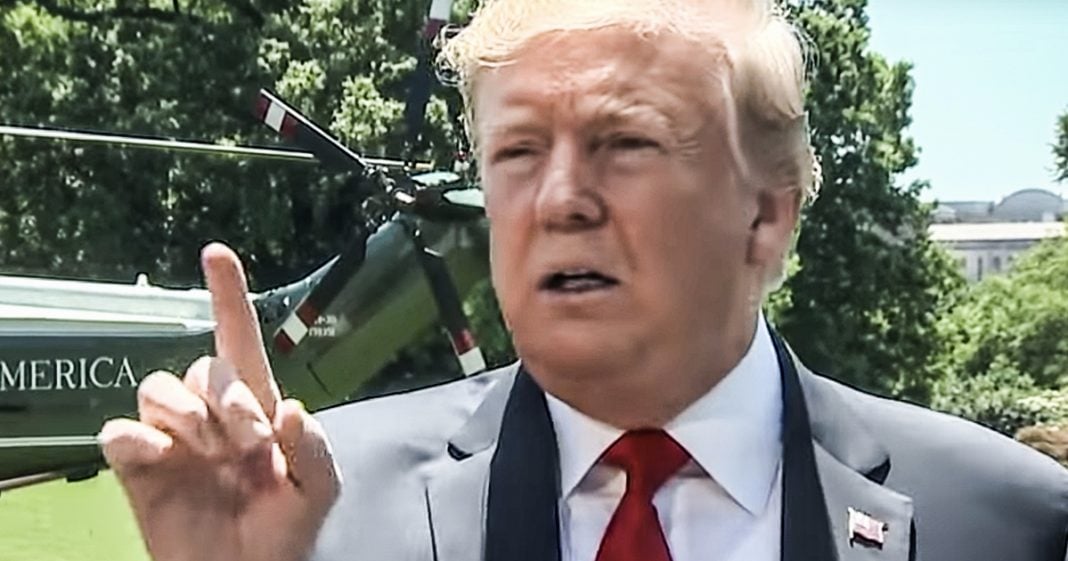 Shortly after Special Prosecutor Robert Mueller ended his press conference on Wednesday, Donald Trump took to Twitter to claim that he had once again been cleared of any wrongdoing and said that if Mueller thought he committed a crime then he would have charged him. However, Mueller basically said the exact opposite and made it clear that he wasn’t allowed to charge Trump and that they didn’t clear him of ANY wrongdoing. Ring of Fire’s Farron Cousins discusses this.

So yesterday, Robert Mueller, the special prosecutor, or I guess at this point we have to call him the former special prosecutor, decided to surprise us all with a press conference at 11:00 AM where he reiterated the fact that his office was told they can’t bring charges against a sitting president. In addition to that, he talked about the fact that, yeah, if we had thought there was clear evidence that Donald Trump was not involved in any crimes, I would have said that, but I didn’t say that so immediately. Obviously, rightfully everybody has an opinion about what this actually means, including Donald Trump. Unfortunately, his opinion of what Mueller said is completely delusional. Here is Donald Trump’s tweet in response to Robert Mueller’s press conference, the greatest presidential harassment in history after spending $40 million over two dark years with unlimited access people, resources and cooperation, highly conflicted. Robert Mueller would have brought charges if he had anything, but there were no charges to bring.

Let me reiterate. One of the first things Robert Mueller told us during that press conference in the first few minutes was that I was for men by Justice Department rules. Actually, it’s not even a rule, it’s a memo. I’ll get to that in a second. But I was forbidden by Justice Department protocols from bringing charges against the president. And in fact, here’s the exact quote, “Charging the president with the crime was therefore not an option we could consider.” So he went into this investigation knowing I can’t charge President Donald Trump with a crime even if I find one that was day one stuff. And here’s the thing, uh, you could have you absolutely 100% could have your basing that on a memo in the Justice Department from the 1970s that said, the Justice Department is not going to indict a sitting president. With regards obviously to Richard Nixon, they were trying to protect Nixon.

It’s not a rule. It’s not in the constitution. It’s nowhere in the bylaws of the Justice Department. You can and should have brought charges against the president of the United States. Now, he did say there was insufficient evidence to link Donald Trump or anyone else to any kind of conspiracy to collude with Russia. But as far as bringing those charges on obstruction, man, had it not been for that DOJ memo from the 70s it sure as hell seem like Robert Mueller would’ve brought charges for obstruction of justice. And that’s what makes Donald Trump’s response to this. So incredibly delusional. Uh, Sarah Huckabee Sanders also ended up tweeting out that statement from the president that, hey, no collusion, no obstruction. He didn’t bring charges because there was nothing to bring. No, he made it clear to everybody watching that he was forbidden from bringing charges. So what does that mean now? Now? Sounds like Robert Mueller was pretty convinced that Donald Trump obstructed justice at least 10 times as laid out in the report.

If he can’t bring charges and the Justice Department, the AG is not going to bring charges. I wonder who out there could bring those charges. Oh, I know the Democrats who control the House of Representatives. A lot of people seem to think that Mueller’s press conference was basically a wink and a nod towards Democrats saying, Hey, I couldn’t do this thing, but you certainly need to get off your bottoms and do your job here. And that job is to bring charges for obstruction of justice. Trump was not cleared by Mueller’s press conference yesterday. Quite the contrary. He was implicated in obstruction of justice, and Mueller told us in the exact words that charging the president was an option that he couldn’t even consider. And more importantly, if they thought Donald Trump didn’t commit any crimes, they flat out would have told us Trump didn’t commit any crimes. But because of what they found, they were unable to say that.