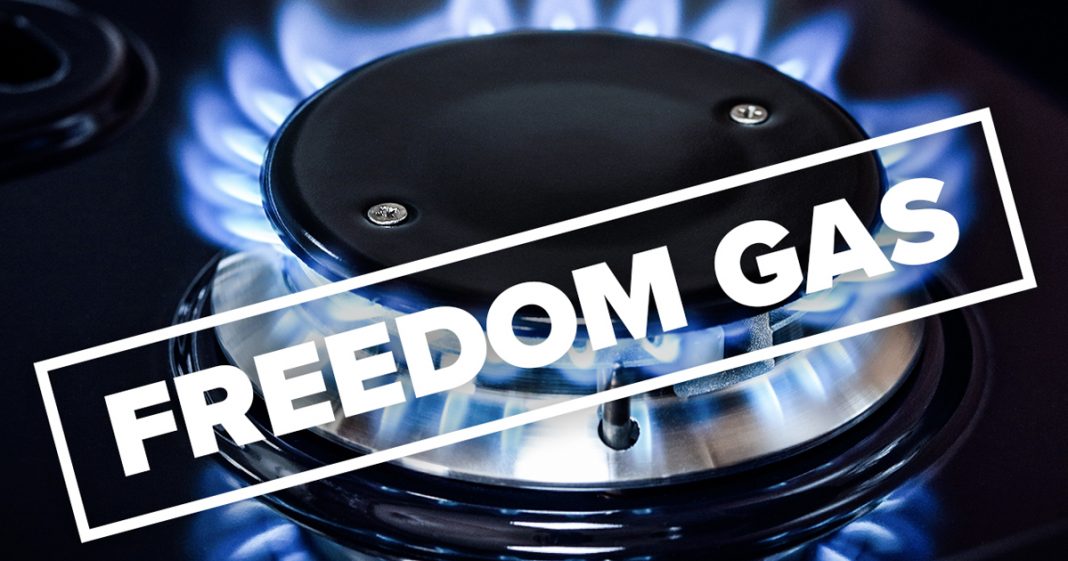 The Trump administration has taken up the crazy to a whole new level, with the Energy Department recently announcing in a press release that the US is going to start spreading “freedom gas” all over the world. This is their new word for natural gas, which they also claimed are made up of “freedom molecules.” This is just pure nuts, as Ring of Fire’s Farron Cousins points out.

On Wednesday of this week, the US department of Energy put out a press release where they kind of unveiled their new terms for fossil fuels. Here in the United States. It’s no longer that we’re fracking for natural gas. No, no, no. Folks would we are doing is extracting “freedom gas.”

Freedom gas is what they’re now calling natural gas freedom gas. Uh, do you know what freedom gas has made off above according to this same press release molecules or freedom? Yeah. Molecules of freedom, makeup, freedom, gas. I honest to God, wish this was a joke. I wish this was a story from the onion, but instead it is an actual press release coming from the federal government itself. As Joshua Holland pointed out on Twitter, you know, the, the word Orwellian kind of gets thrown around a lot. Seems to have lost all meaning. However, in this particular instance, as Holland points out, there’s really no other way to describe it here. This is an Orwellian type name change of fossil fuels that helped destroy the planet. And this administration has the guts to call them freedom gasses. So, I guess the big question is what are we going to do with these random gases? We have so much freedom gas here in the United States that were almost choking on the freedom. We’re exporting that freedom. They say the Department of Energy is telling us we’re taking the freedom gas from Texas and we’re sending it across the globe.

We’re exporting it at a time when they tell us that, hey, we, you know, we, we still have to import energy from other, other countries, but we need to expand energy exploration here so that we can be energy independent. But as soon as we drill for more, Hey, that freedom gas is going overseas, probably going to be loaded up on freedom boats where freedom workers are going to get their little freedom tools and then release the freedom gases all over the freedom motion. That’s what’s going to happen. Freedom folks, and all the little molecules of freedom then go up into our freedom atmosphere to, uh, you know, destroy the planet. Uh, Democratic presidential candidate Jay Inslee actually had a perfect response. Uh, you said freedom gas. Freedom is generally good, but freedom from glaciers, freedom from clean air, freedom from healthy forests that aren’t on fire and freedom from the world we know and cherish is not what we seek. And he’s spot on with this because that’s what this is folks. Natural gas is not a clean burning fuel. The extraction process, uh, for removing natural gas from the ground is just as dirty as burning coal.

Well, go and look at the studies. Look at the reports, how, look at some of the writing that I have done researched over the last 10 years over its lifespan. Gasses just as dirty as any other form of energy. It is not a bridge fuel. It is not a cleaner fuel. It is a fuel that will keep us addicted to fossil fuels for the rest of eternity. But I guess that’s what this administration considers freedom.