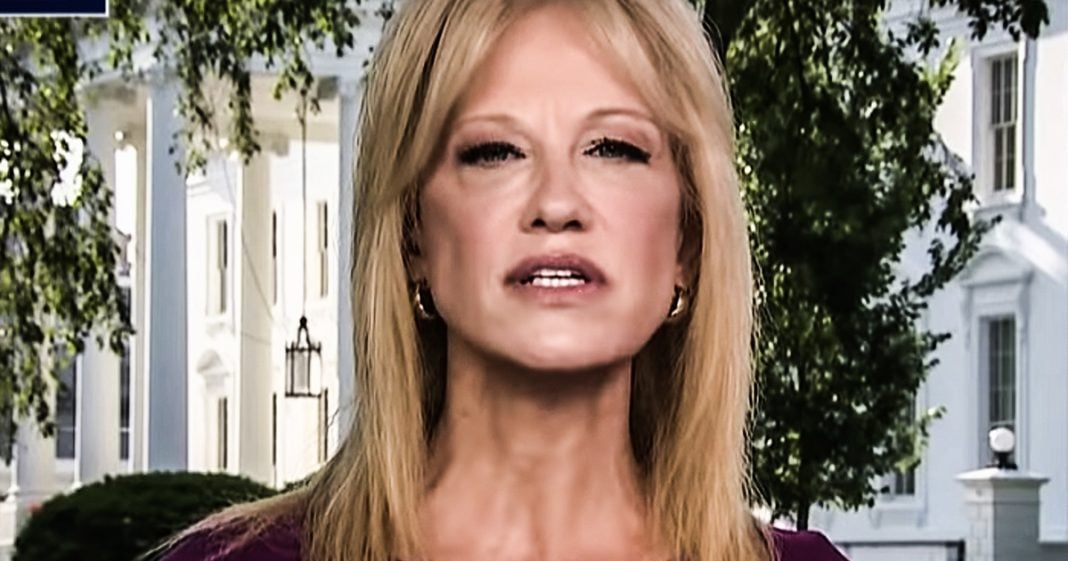 During a back and forth with reporters on Wednesday, Kellyanne Conway repeatedly attacked Trump’s Democratic rivals in front of the White House, a clear violation of The Hatch Act. When asked by the reporters about her repeated Hatch Act violations, she responded by saying “blah, blah, blah…Let me know when the jail sentence starts.” This woman is actively mocking the fact that she isn’t being punished for breaking the law, and Ring of Fire’s Farron Cousins explains what needs to happen.

Are you kidding me? Really? Is it all right? All right. All right folks. Here’s the thing. Here’s the thing. Kellyanne Conway twice has been confirmed to have violated the Hatch Act. The office of special counsel within the White House, not Robert Mueller, special prosecutor special counsel has twice confirmed that yes, Kellyanne Conway violated the Hatch Act. We know this for a fact. They then turn it over to the White House for disciplinary action. In both instances, the White House said, we don’t think she did anything wrong, so we’re not going to do anything about it.

When an official violates the Hatch Act, they are punished either with fines or with dismissal from office. The Trump administration has decided, not just with Kellyanne, but with other people that yeah, we’re not gonna do anything about it. Hatch Act violation complaints have risen by 30% since the Trump administration took office and none of them are being punished for it. None of them are being fined. None. None of them are being fired for it. And that’s why Kellyanne Conway can come out there with this attitude blatantly flout the law and say, let me know when the jail sentence starts. Blah, blah, blah. The, this is a representative of the office of the president and I don’t care who’s sitting in that office.

Yeah, act like you’re a grown up act like you have a little bit of respect for the rule of law. But no one in this administration does. Honest to God, not a single human being has regard for the rule of law that’s working in this White House today. They don’t. They don’t. They’re all, every one of them. God Awful, disgusting, horrible human beings. And if you think I’m wrong, feel free to try to prove me wrong. But I followed these people closely. I’ve seen their video appearances. I’ve read their quotes to you people. I know what I’m talking about. These are not decent human beings and I think most of people watching this agree with me on that, but to any of the trolls out there who want to say like, how dare you speak so poorly of them now, how dare they speak so poorly of the rule of law here in the United States?

That’s the question I have because I don’t care if you agree with it or if you disagree with it. That law is a law. Kellyanne Conway has been confirmed to have violated it and because she doesn’t get punished, she feels like she has clearance now to go out there, openly violate it in front of reporters, and then mock them when they bring up the fact that what she is doing is technically illegal. It’s time for Congress to step in and act. It’s time for them to pull in. Kellyanne Conway questioned her on the record and then enact some kind of disciplinary action. They do have means to do this and they need to do that because obviously the Trump administration, every one in that White House is probably going to high five her rather than try to fire her for breaking the law.