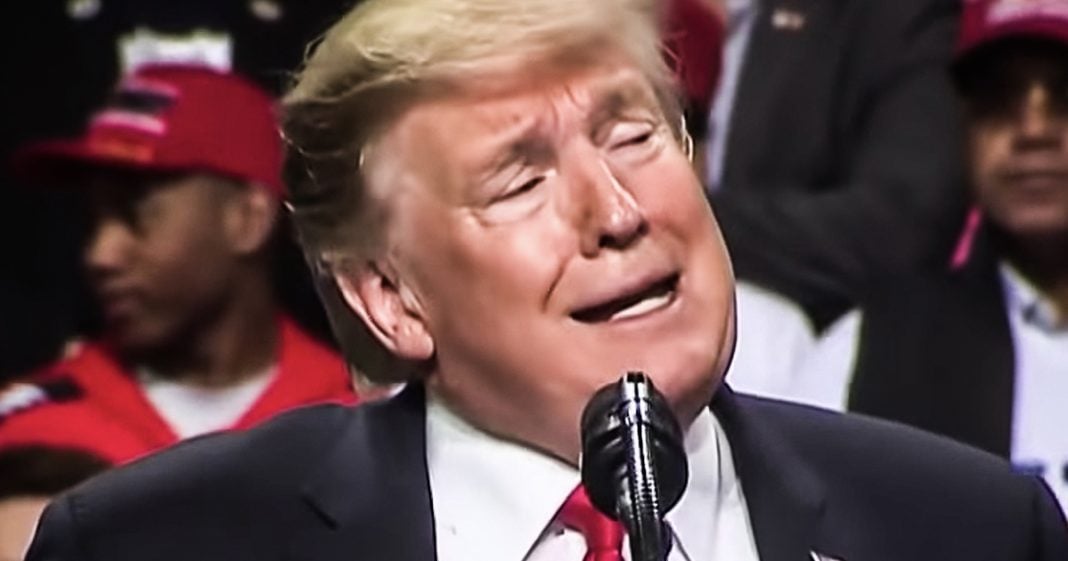 In an early morning tweet on Thursday, Donald Trump admitted that Russian interference helped him win the election, but says that the Mueller report shows he had nothing to do with it. He later deleted the tweet and had to tell reporters that Russia did not help him get elected at all. But the bigger issue is that we know election interference happened, but Mitch McConnell and Trump are preventing us from making sure it doesn’t happen again. Ring of Fire’s Farron Cousins discusses this.

On Thursday morning, Donald Trump admitted something shocking. He admitted that it was because of foreign influence, foreign interference in the 2016 election that he even got elected. He sent it out in a tweet. Folks, here’s the tweet.

“Russia, Russia, Russia, that’s all you heard at the beginning of this witch hunt hoax, and now Russia has disappeared because I had nothing to do with Russia helping me to get elected. It was a crime that didn’t exist. So now the Dems and their partner, the fake news media…” Of Blah, blah, blah, tweet continued on another page that I don’t care about.

The important thing to know is that Trump’s specifically said I had nothing to do with Russia helping me to get elected. So he’s admitting in this tweet that Russia helped him get elected. Now during Robert Mueller’s press conference on Wednesday, he both began it and ended it by saying, hell yeah guys, there was a lot of Russian interference.

They got into systems, bad things happened. We need to take that seriously and we need to fix it, and so Trump comes out and says, Hey, but I wasn’t involved in it. It helped me. Oh Wow. That it helped me, but I didn’t do it. At least there was insufficient evidence by Robert Mueller, according to Robert Mueller, to say that Trump was involved in any of it, but he said they, their interference helped him win. Now, just a short while later, Donald Trump’s walking out of the white and house on the South Lawn and a reporters asked him like, Hey, you just admitted this thing, and he responded. He said, no, Russia did not get me elected. Okay. So I guess that clears that up, but the tweets is still there and in fact that actually a lot of stories said that he deleted the tweet. But in fact last time I checked, that tweet is actually still there.

If it’s not, don’t worry. We’ve got screenshots as do hundreds of thousands of other people. We’re not going to forget that he said this except for one person. There’s one person who was 100% going to forget that Trump said this. Gonna forget that. Mueller said there was outside interference in 2016 and that person is Mitch McConnell, Mitch McConnell, Republican majority leader. In the United States Senate has repeatedly blocked every single attempt, including the bipartisan attempts to secure our elections from outside interference, whether it’s from Russia or from any other country on this planet. Mitch McConnell has repeatedly multiple times, said, nope, and he single handedly killed these measures to protect our elections. Because here’s the thing, folks understand this. This is not just about Russia, okay? There’s lots of other bad actors on this planet. We just happened to know what Russia did, and to be honest, what they did was fairly weak. It worked. Not going to discount that it worked and it happened, but it was also very weak. You know, buying some Facebook ads, spreading some means, creating some fake Twitter accounts.

What we also know, I guess that they hacked into a couple election systems here in the state of Florida, but ah, you know, that’s a big deal and that’s what we have to worry about first and foremost, because study after study has shown us that we, we’ve got to worry about kids down the street from us. We got to worry about our neighbor. Those people can also hack into these election systems fairly easily. Yet, Republicans repeatedly tell us they’re not going to do anything to fix them. Meanwhile, yeah, I understand. Hell yeah. A lot of people are out there still yelling. Russia, Russia, Russia. If you’re only focusing on Russia, then you’re not taking the issue seriously either. Folks, you’re not. We have known for well over a decade and a half that voting machines and voting systems in this country are hackable, hackable by people with even the most rudimentary hacking skills.

Children below the age of 13 have been able to hack into these systems and actually change votes and changed the voting rolls. So if you’re only focused on Russia, then yeah, you’ve missed the literally everything else because there are so many problems. There’s people in the United States right now who would love the opportunity to change those voting roles. But again, Republicans do nothing. Republican’s are stopping any efforts to secure our election systems. Why? Well, the answer to that is quite simple because every time we hear a story about an election system getting screwy or five hour wait times, or repressive voter ID laws or poll taxes like we’ve got in Florida, every time we hear one of those stories or vote swapping on the voting machines, it always seems to benefit the Republicans. And that is the only reason that they won’t do a damn thing about it.