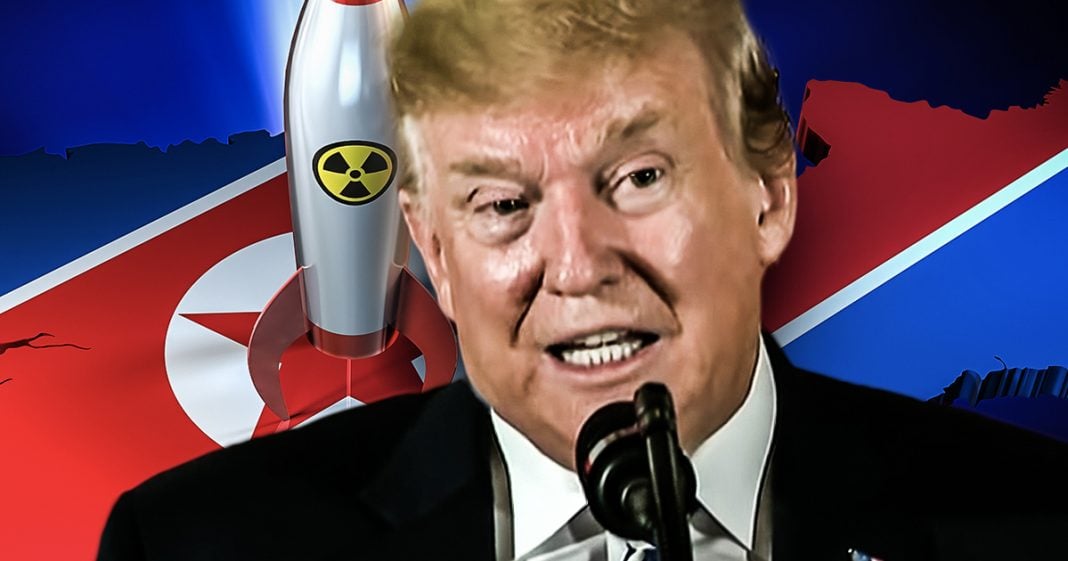 During his visit to Japan this week, Donald Trump said that he had no problem with North Korea still running missile tests, even though a few months ago he told us that these tests had ended. He’s moving the goal posts again because he refuses to admit that he has failed at brokering a deal with North Korea, and now we’re in the same situation we were in before he even started. Ring of Fire’s Farron Cousins explains what’s happening.

On Monday during a press conference with the Japanese Prime Minister, Donald Trump told the world that he really isn’t concerned about the fact that North Korea is still performing missile tests now. Japanese prime minister, who again was standing right next to him, completely disagreed. He pointed out the fact that, yeah, this actually affects the safety and security of Japan. It violates a UN Security Council rules. We’re very concerned about it here in Japan, but Donald Trump says, now me, I’m not worried. Not Personally. In fact, that is exactly what he said. He said, when asked if he was bothered by these missile tests, he said, no, I’m not. I am personally not because that’s all that matters. Right. It only matters if Trump personally feels like there is a threat. It doesn’t matter that our allies, including those in Japan are like, Hey, this is a big problem for us.

We need this to not be happening. It’s a violation of UN rules. But yeah, I guess go ahead cause it doesn’t bother you personally. I guess we’re okay. Let’s go play golf. He didn’t actually say that last part, but they did. In fact, go play golf. Uh, during the weekend. Donald Trump is refusing to admit his own failures with North Korea. I mean, let’s not forget going all the way back to the Bush administration. The reason we have such hostility with North Korea is based on these missile tests. And sure, these are short range missiles they’re testing right now. Not long range missiles to hit the United States. But that doesn’t mean that’s not a huge threat to our allies in that region. It also doesn’t mean that they haven’t ramped up nuclear capabilities because we know that they have, Trump’s talks with Kim Jong Un have been a complete and total failure.

That’s why he’s having to tell the press right now. Now I’m not bothered by it. Why? Why would that bother me that we’re going to eventually make a deal? He didn’t go on to say, he said, we’re going to eventually make a deal. Really when they haven’t stopped testing missiles, they haven’t stopped, uh, ramping up their nuclear capabilities. In fact, they’ve kind of put that in hyper drive at the moment, according to your own intelligence agencies. So what are they going to make a deal? The answer is they’re not having nuclear capabilities or long range missiles are the only thing that North Korea has to make them feel legitimate and feel protected from the threat of a country like the United States. After all, we’re certainly not above just marching into another country overthrowing their government, leaving the country in shambles and then just walking out saying, mission accomplished.

We have seen it too many times throughout American history. That’s what we do in North Korea. Understands that that doesn’t change the fact that that country is ruled by a brutal bloodthirsty dictator, but at the same time they don’t want the US to come in and start killing their leadership. So kind of between a rock and a hard place. Right. Donald Trump in that same press conference went on to praise Kim Jong Gun, calling him a very smart man while at the same time saying, Joe Biden is a very low Iq individual. Oh I’m sorry. He said that Kim Jong Nun called Joe Biden, a low Iq individual. How convenient is that? Right? Cause that’s the same language Trump uses. And suddenly his good buddy over there in North Korea is using the exact same language. Wow. It almost seems like that’s completely made up and never happened. Nonetheless, North Korea has not changed. Donald Trump has accomplished nothing with his talks from them, and he is never going to, that’s the point. But his refusal to admit that he failed is not only putting our allies in jeopardy over there as Japanese prime minister was trying to politely say, but inevitably it also puts the United States in danger.