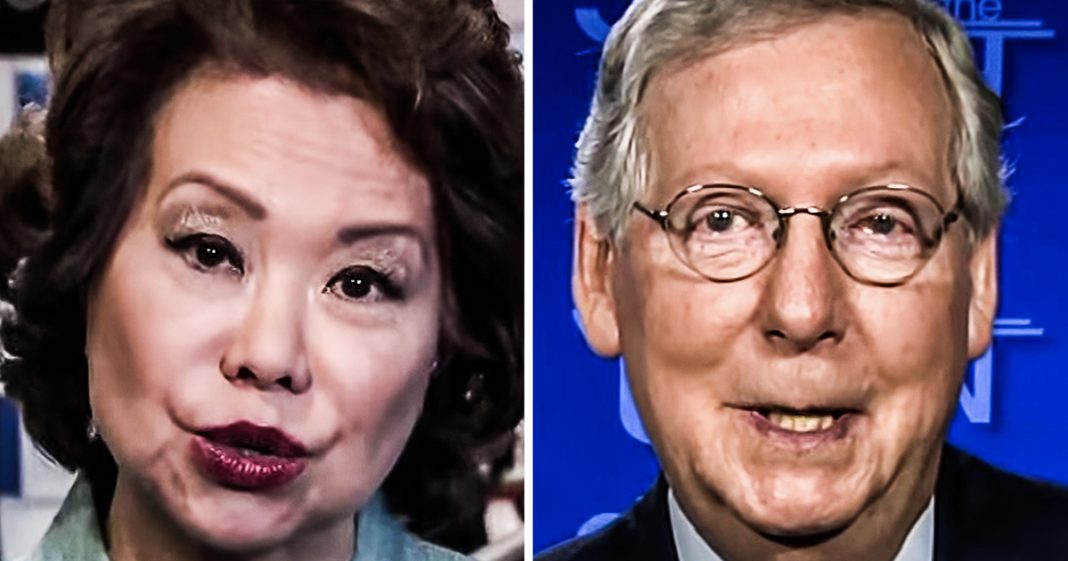 Elaine Chao, the Secretary of Transportation and wife of Senate Majority Leader Mitch McConnell, has been busted raking in more than $40,000 from shares of a company that she swore she no longer owned when she took her job. The company has directly benefited from Chao’s post in the Trump administration, and now she has, too. Ring of Fire’s Farron Cousins talks about this latest case of corruption and what Congress should do about it.

At this point, it really is starting to feel like there isn’t a single member of the Trump administration that is not just corrupt down to their core, the most recent member of the Trump administration to be exposed as a complete liar. And you know, corrupt individual is the secretary of transportation, Elaine Chao. It was revealed on Tuesday of this week that mrs. Chao actually still own stocks in a company, a Vulcan materials happens to be one of the largest construction contractors for a new transportation projects in this country. Uh, she used to sit on their board, but when she accepted the post of secretary of transportation, she signed a piece of paper saying, I’m, I’m resigning from the board. I’m going to sell all my shares of this company and I will no longer in any way profit from them. They’re going to pay me cash. That part’s important.

They’re going to pay me cash for everything I own in this company. I’m walking away, I’m going to be secretary of transportation again, we found out Tuesday they didn’t pay her in cash. They paid her in stock. So she’s still owned stock in the company. And do you know what happened? Oh, she’s made $40,000 off that stock because the company that she owns stock in that she swore she was completely divesting from, wouldn’t even be associated with them there directly benefiting from her position as secretary of transportation. Now obviously this is a big deal. This is very corrupt and Miss Chao needs to go in front of Congress and answer questions as to why she lied to us. She signed a piece of paper saying she was going to do a thing and then she didn’t do the thing and then she made a butt ton of money off of it. Oh, and by the way, this isn’t actually mentioned in any of the stories I read about this, about what Miss Chao has done. But I think it’s worth mentioning because a lot of people apparently don’t know about this and I think it’s lazy reporting to not include it. But, uh, Miss Elaine Chao is also the wife of Senate majority leader Mitch McConnell.

The stories I read didn’t actually mention that they, there was no mention of Mitch McConnell whatsoever and when you have the most powerful Republican in the Senate and his wife is secretary of transportation and she’s lying to the public and making these ill gotten gains, that also would benefit her husband, Mitch McConnell. I would think it would be worth throwing his name and a story just so people understand that the two are connected legally connected by marriage license. And I’m willing to bet that that corruption doesn’t just stop at the Wifi. I’m willing to bet it probably even came from the husband. We already know he’s been steering contracts, uh, towards some of his Kentucky donors through the Department of Transportation. There is a lot there that really needs to be fully investigated and I’m willing to bet that at the end of it, there would be enough evidence available to get both McConnell and Chao out of office.

But more importantly, this is a pattern. This is something we have seen since day one of the Trump administration. These people are nothing but liars and thieves and they are not draining the swamp. There just the newest invasive species living in it. I want to read you, this is from Vanity Fair. All of the corruption that we know about. No, not even all of it. It’s just some of it from the Trump administration. You know, first you had Scott Pruitt, former EPA head who used this post to jet set on tax payers dime store and find a job for his wife among a dizzying array of other, uh, banalities. There’s Tom Price who was also forced to resign in 2017 in mid questions about his extensive taxpayer fund to travel. There’s Ryan Zinke, the former interior secretary who awarded a contract to restore Puerto Rico’s electrical grid to an ill equipped two person company run by his neighbor.

Uh, there’s Wilbur Ross Trump’s commerce secretary who also promised to divest from his stocks, but he didn’t saw those shares increase in value. Treasury Secretary, Steve Mnuchin, similarly van the device divest from his film company, Storm Chaser partners, but snake Ali sold his ownership interest to his wife. And of course there’s a big manage self who’s astonishing web of conflicts of interests have made it impossible to distinguish the line, uh, where the line is between his presidency and his business. It’s a pattern of behavior, folks. It’s not just Donald Trump. It is quite literally every single person that he is installed in his cabinet.