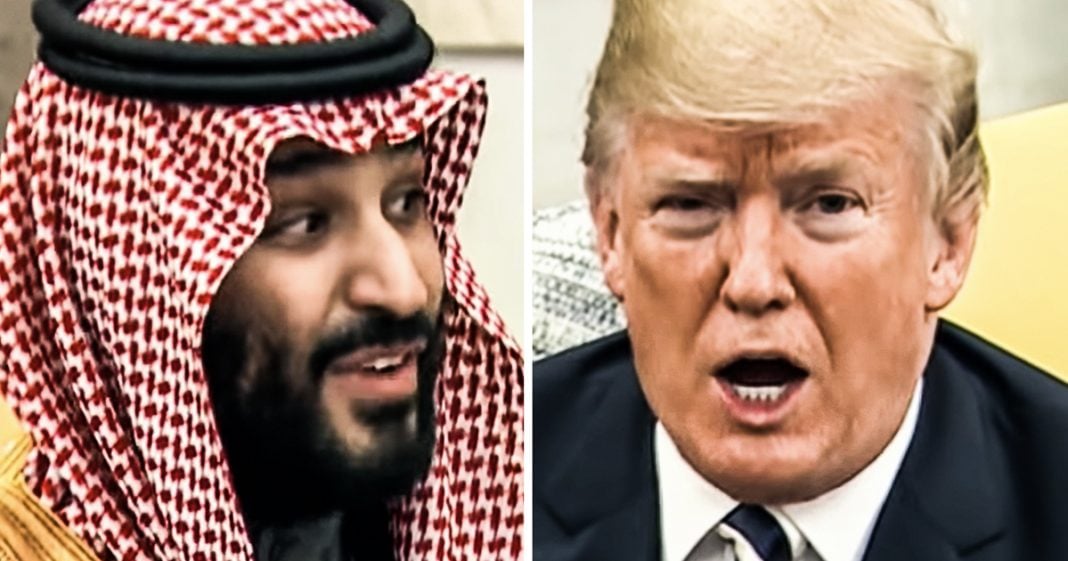 In what may be one of the most overlooked stories of the year, Donald Trump declared an emergency last week so that he could bypass Congressional approval and sell billions of dollars worth of weapons to Saudi Arabia and other Middle Eastern countries. This is part of the buildup to a future war with Iran, but it also serves as a way to give Saudi Arabia all the weapons of death that they need to continue their reign of terror in the region. Ring of Fire’s Farron Cousins discusses this.

Just hours before. People loved work this past Friday to enjoy their long memorial day weekend out at the beach, out in their pools, barbecue and hanging out with families, honoring the memory of our fallen soldiers. Shortly before all of that began when basically nobody was paying attention. Uh, Mike Pompeo announced the Donald Trump had made the decision to declare an emergency so that the United States could sell more weapons to Saudi Arabia, the United Arab Emirates and Jordan.

Yeah, this happened late Friday afternoon. Again, best time to drop a story when you want it to disappear and disappear. It did. This by far, and it hasn’t even been a week, is absolutely one of the most underreported stories of 2019 this is a major problem and yet nobody seems to be talking about it. The United States, Donald Trump declared an emergency so that he could bypass Congress and not have to get congressional approval for these arms sales to Saudi Arabia.

And now that’s what’s happening. Eight point $1 billion worth of weapons heading over to the Middle East. There’s obviously several problems with this. First and foremost, one of the reasons they’re doing this is because, and Donald Trump even admitted this, the threat of Iran, we got to arm our buddies over there in the Middle East because Iran is just getting so bad and we need to make sure that they are ready to attack, to kill, to main, to do whatever the hell they need to do because we want that war with Iran and we want our buddies over there to help us out. We’re also sending what I think a few thousand troops over there as well, US troops, so they’re going to get a little over $8 billion worth of our weapons. Most of it going to Saudi Arabia. And what’s even scarier is that they’ve actually even admitted that we know some of this is for weaponry and to repair and make upgrades on weaponry that Saudi Arabia doesn’t use. But it is weaponry that Saudi Arabia likes to sell. So they’ve already admitted that some of the crap we’re sending them some of these weapons of war tools of death that they’re just going to turn around and resell to other countries too.

How does that help the United States in any way whatsoever? The answer obviously is that it doesn’t. But they think we’re stupid. Donald Trump didn’t want congress to look at this. He didn’t want Congress to have a say in it because he saw what happened when it blew up a month or two ago when it was revealed that Rick Perry of all people was brokering a deal to sell arms to Saudi Arabia. Yeah, that blew up in their face. So Trump says, okay, I’ll just declare an emergency and then we don’t have to go through Congress because they’re already pissed off about this deal. There is no emergency right now, folks. There is no emergency. The US intelligence agencies, intelligence agencies, overseas, top military brass, both here and abroad are telling us Iran is not posing any more of a threat to us now than they were a year ago, two years ago. Whatever it is, the threat isn’t there, but this administration keeps pushing us every day closer and closer to war with them.

Now, here’s another terrifying thing. Not only is Saudi Arabia going to be selling some of these weapons, but we also know reports have proven that Saudi Arabia also uses the weapons they’re getting from us to go over and kill civilians in Yemen. That’s the thing that happened and we can verify that and sometimes they also killed journalists. Even Lindsay Graham himself has come out and said he doesn’t agree with this move, and when you have a warmonger like Lindsey Graham who’s never seen a country, he doesn’t want a bomb stand up and say, hold up. Why are we selling these crazy people weapons? Then yeah, you’re probably on the wrong side of history, but unfortunately there’s literally nothing we can do to stop it until November of 2020 when we vote this madman out of office. Until then, we have to hold them accountable. We have to talk about what’s actually happening and hope to God that we do not launch a first strike or any strike whatsoever against Iran, and that there’s enough pressure on Saudi Arabia in the Middle East to where they don’t use this $8 billion worth of weapons to go and kill civilians in their neighboring countries. Because we know for a fact they like to do that.