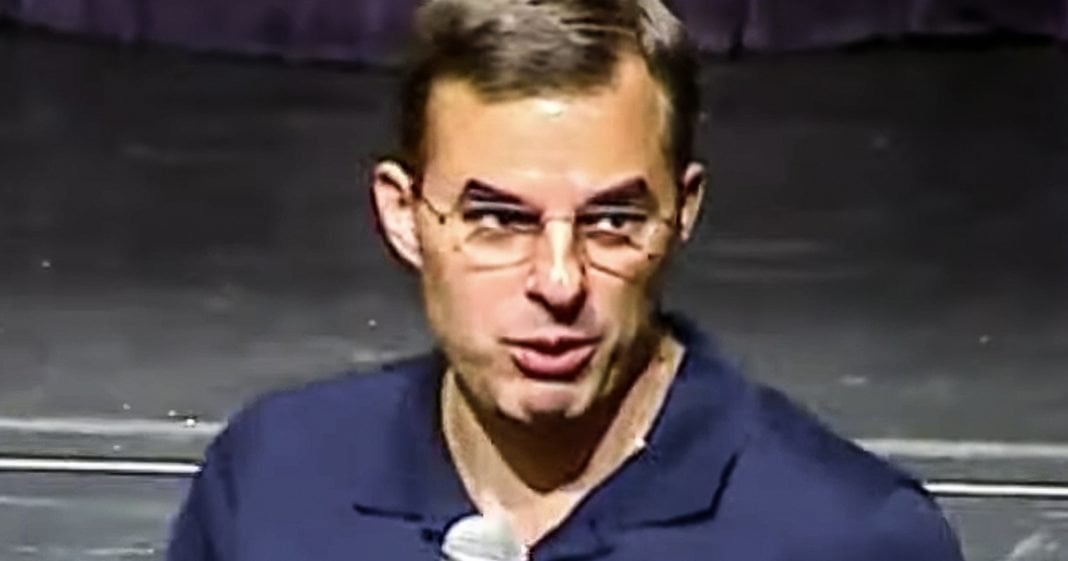 Republican Representative Justin Amash did a town hall last night and the crowd absolutely loved it. Amash drew a standing ovation from the crowd when he began talking about impeaching Trump, proof that the public isn’t as soured on the idea of impeachment as Democrats are pretending. Amash is in it for himself, but he is right about this issue. Ring of Fire’s Farron Cousins discusses this.

The public does not want to impeach Donald Trump. That is what democratic leadership in the house thinks. That is what Poles are telling us, but surprisingly enough, it’s not actually what the public is telling us. Yesterday evening, Republican Representative Justin Amash during a town hall event in grand rapids, Michigan began talking once again about impeaching Donald Trump, and as soon as he did, do you know what happened with that crown? They all stood up and started applauding. He got a standing ovation for talking about the fact that Donald Trump has committed impeachable offenses and that an inquiry should begin.

There’s several things to note here. First and foremost, I’ve been teasing for the last two years telling Republicans that if they were the ones to stand up and get rid of Donald Trump, they then would be the heroes in this situation. The Democrats would look like idiots and republicans walk away with a very easy 2020 victory for both the Senate and the White House. I think Justin Amash was listening all those times. I said that because it appears to be working for him. It’s working very well and yes, he had now has a uh, Trump supporting a primary challenger. Probably not going to go very far because Amash is making headlines. People know his name. People give him standing ovations for talking about wanting to impeach the president, but Amash this is the other part of it is also in it for himself. This is a guy who leans more libertarian than conservative, so we know that his economic policies are absolutely disastrous for the United States. A pro business guy in anti-consumer guy, the guy sucks at everything he stands for except for the impeachment thing.

Will he be able to draw enough Democrats over to his side with just the impeachment call knowing how horrible he is on literally every other issue? I think he could. I think he absolutely could. Now that’s only would be enough really to win back his congressional seat in 2020 certainly not going to be enough to help him if he does decide to run as the Libertarian Party candidate in the 2020 presidential election, which he repeatedly says he has not ruled out yet and that’s what this is all about. He may actually dislike Trump. I do agree with what he has said in his assessment of the Mueller report and the fact that it did establish a pattern of behavior, a pattern of criminal behavior for Donald Trump. I agree with them 100% on that. That’s obvious. That’s clear as day. The public likes to hear that everybody hates Donald Trump.

Polls prove that and this man out here talking about impeachment is stealing the limelight show and Democrats. This is what could be happening in the you. You could be out there talking about the obstruction of justice. You could be out there talking about the banking crimes, but you’re not. You being wishy washy on it. You’re backing off your lawsuits. I’m taking your thunder and it’s going to result in this guy likely running for president as a libertarian, splitting some conservative votes and allowing Democrats to sale to an easy 2020 victory. So because of all of that, I don’t exactly know how I feel about this guy, but I know that if he were in any real position of power, regardless of the fact that we both agree that Trump sucks, he would be an absolute disaster for this country.