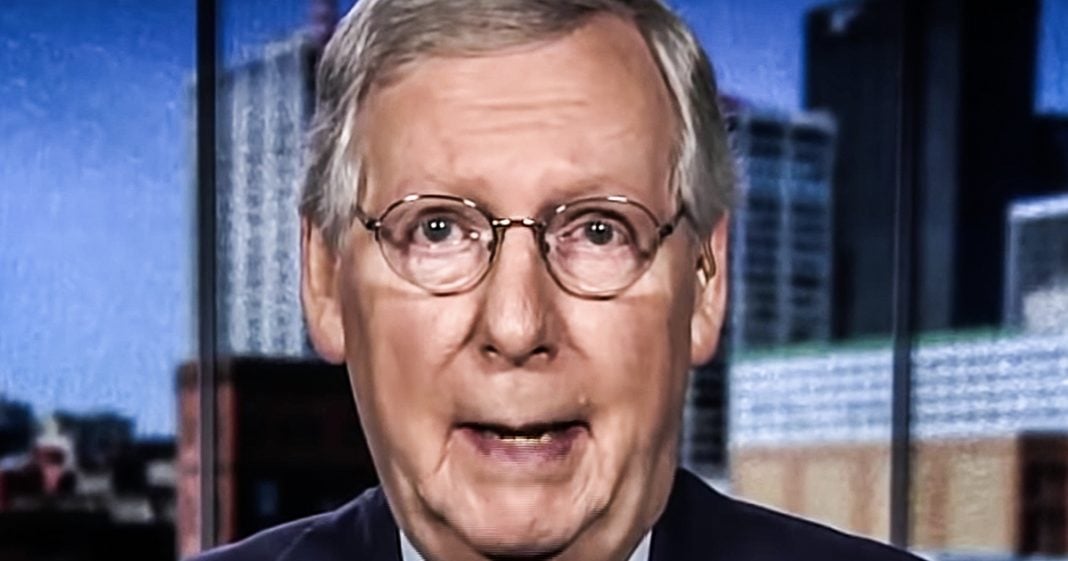 During a speech this week at a local Chamber of Commerce, Republican Senate Majority Leader Mitch McConnell was asked whether he’d fill a Supreme Court next year since it was an election year. McConnell said that Republicans would absolutely fill it, breaking his own claim that you can’t appoint SCOTUS justices during an election year. McConnell is human garbage, and hopefully voters will put him out to the curb in 2020. Ring of Fire’s Farron Cousins discusses this.

You know, as we inch closer and closer to the 2020 presidential election, I am not convinced that defeating Donald Trump is the most important thing for this country right now. I mean, obviously we need good policies. We need to take care of struggling Americans because there’s more and more in those ranks every day. But in order to do that, Donald Trump may not necessarily be the guy holding us up on progress. I think that mantle belongs to another guy, Republicans Senate majority leader Mitch McConnell. Yesterday during a speech and Kentucky at a local chamber of Commerce, Mitch McConnell was asked the question, what would you do if next year in 2020 there happens to be a supreme court vacancy? Would you fill it? And Mitch McConnell took a pause, took a dramatic sip of his drink, set it down, and then said, oh, we’d fill it. The entire room erupted in laughter because that Mitch McConnell’s being funny, I, because he’s old as back in 2016 that because it was an election year, they weren’t even going to hold a vote on Obama’s supreme court nominee, Merrick garland.

You know, let the voters decide which party gets to a point, that seat, even though the voters had already decided which party got to choose that seat, they decided that back in 2012 when they elected Obama to serve until noon on January 20th, 2017 it was Obama’s seat to a point and Mitch McConnell singlehandedly blocked it because he made up some lie saying, no, we don’t do this in an election year, even though it’s happened plenty of times throughout history during an election year, but now he’s being fun ride. He saying, Oh, hell yeah. We’d fill it. I wouldn’t hold myself to my own standards. That’s what he told the crowd and they loved it. Mitch McConnell is absolutely a garbage human being without a doubt, one of the worst human beings to ever serve in the United States Senate. But here’s the thing. Here’s what Mitch McConnell needs to understand. The public sees him.

Yeah. During the Obama years we saw him, we saw his obstruction, especially with Merrick Garland, but I think people are paying a little bit more attention. Now you’re paying a little bit more attention to what’s happening in the Senate so that we understand that. Yeah, it’s not just Donald Trump up there being a horrible human being. We’ve got plenty of those in the Senate as well, and luckily they all happened to be up for reelection in 2020 or at least most of them McConnell, Lindsey Graham, all the real garbage trash republicans are up for reelection. In fact, that’s actually why McConnell was backing Kentucky, doing this little stump speech at the local chamber of Commerce.

Mitch McConnell is the one who’s pulling the strings on destroying the judiciary, not just the Scotus. Every court throughout this country, he is the man responsible for it. So five years from now, you get injured by a product. You take a pharmaceutical that gives you cancer or destroys your kidneys or your liver or your heart. You can thank Mitch McConnell when a judge decides to rule for the corporation, even though they knew it was going to happen to you and hid the dangers in line to you that corporate appointed judge, thanks to Mitch McConnell’s going to throw your case out. You get nothing other than a slow, painful death. Thank Mitch McConnell for that, but there is a chance we can vote him out of office in 2020 we absolutely could. Same thing with Lindsey Graham.

These people could be sent packing voters in their states, Kentucky and South Carolina respectively could put these two garbage human beings on the curb in the 2020 elections. Send them home, send them packing, get them out of Washington DC so they can stop destroying this country because that is exactly which Mitch McConnell’s doing here and later after he made this comment that, oh, we’d fill it. His spokesperson came out and said, well, hold up. Let me explain a little bit the differences. When it happened with Merrick Garland, Obama was a Democrat in the Senate, were Republicans. That actually just made it that much worse. You proved that your Ross Mitch McConnell was being 100% partisan and crappy with Merritt garland had nothing to do with the will of the voters, had everything to do with the fact that Mitch McConnell is an absolute piece of walking and talking human trash. So again, let’s put that piece of trash out on the curb in the 2020 election.