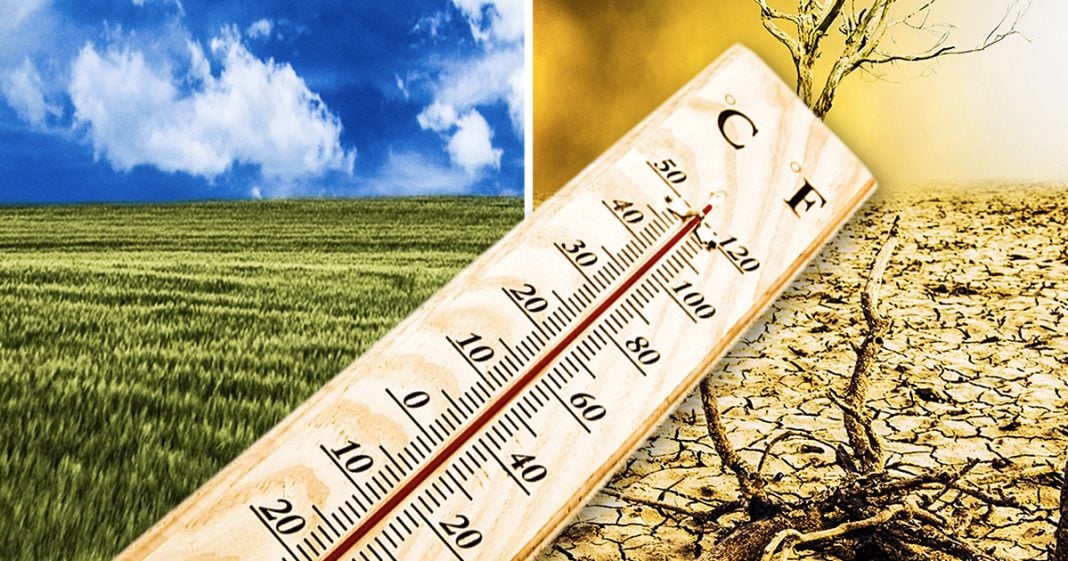 A Trump administration official has ordered the US Geological Survey to stop doing assessments of how bad climate change will be by the end of the century, and instead they are now only allowed to use computer models to show how bad things might be in the next 20 years. This will allow the government to enact more climate-killing policies, as the worst effects of climate change won’t occur until the back half of this century. Ring of Fire’s Farron Cousins explains what’s happening.

James Riley, the director of the US Geological Survey member of the Trump administration has issued a new rule for the USGS. He says that from this point forward you are not going to include in any reports which is going to include the uh, next national climate assessment coming out in 2021 or 2022. You’re not going to include any of the bad things that are going to happen from climate change beyond the year 2014. You can no longer as previous climate assessments have done his previous government studies have done. Look at the effects of climate change towards the back half of the 21st century. You know, when things are really supposed to be off the rails because we haven’t done anything about it. But instead Mr. Riley here is saying, nope, you can’t look beyond 2040. That’s it. You can use computer models to see how bad things could be by 2040.

And that’s as far as you can go. So 20 years into the future. That’s it. That’s as far as you can look. Okay, well that’s going to discount a lot of things. Like the fact that the city of Miami, Florida could be underwater by the end of this century. It’s not going to be underwater by 2040 at least not the entire thing. Parts of it already our during the king tides, so that won’t be taken into account when the government makes its decisions about what to drill, how much to drill, where to put new sea walls or things like that. That won’t even be a factor anymore. Basically, and I’m only using Miami as an example. There are hundreds of others that I could pick from, but here’s the thing. This is why this decision matters so much. These assessments that do look 80 years into the future, a hundred years into the future are important because it tells us which projects we need to work on or which policies we need to abandon because it’s going to make it so much worse by taking those away, by taking those years away and only saying you can look 20 years in the future.

Yes, suddenly things aren’t going to look so bad and you’re going to be able to go out there and say, well, listen, our own assessment says that this area is going to be fine. Yeah. Maybe by 2040 it will still be fine. You won’t even be able to notice the difference in the weather, but by 2060 year city won’t exist anymore because you’re going to be underwater, but that still shouldn’t stop us from being able to do all these new fossil fuel projects from neglecting to build you a big sea wall to keep out these rising tides every week. Sorry, not going to happen because we’ve changed the rules so that we don’t have to acknowledge that we’re destroying the planet. That’s what’s happening here. That’s what this is about. They don’t want us to know. They don’t want to know because they don’t want to have to plan for it.

They have an agenda as it is right now. Mr. Riley himself actually used to be an oil geologists working for the fossil fuel industry. So of course his decision here is repaying the people who made his entire career. The rest of us are the ones who get to suffer for that and suffer. We will. This is not a problem we can continue to ignore and the most devastating part about all of this is that all we had to do was take action. We still have time to take action and we can fix it. Hundred percent fixable problem, but we’re not doing anything about it. In fact, things are actually getting worse. Emissions are going up a fine particulate matter in the atmosphere and in our air is going up. We’re actually making things worse. So six months ago when they told us we had 12 months to take action to prevent some of the worst effects from becoming permanent, we’re now at about 11 and a half months.

But if you factor in how much emissions have increased in that time, proudly a little, little less than 11 and a half years. I think I just said months. It’s 11 and a half years now. Yeah. But we probably don’t even have that. And if this administration gets another four years in office in 2020 yeah, we’re pretty much gonna go ahead and run out those 11 and a half years or 10 years, whatever it is by that time in a matter of four years, because these are the kinds of ass backwards policies they continue to put in place.