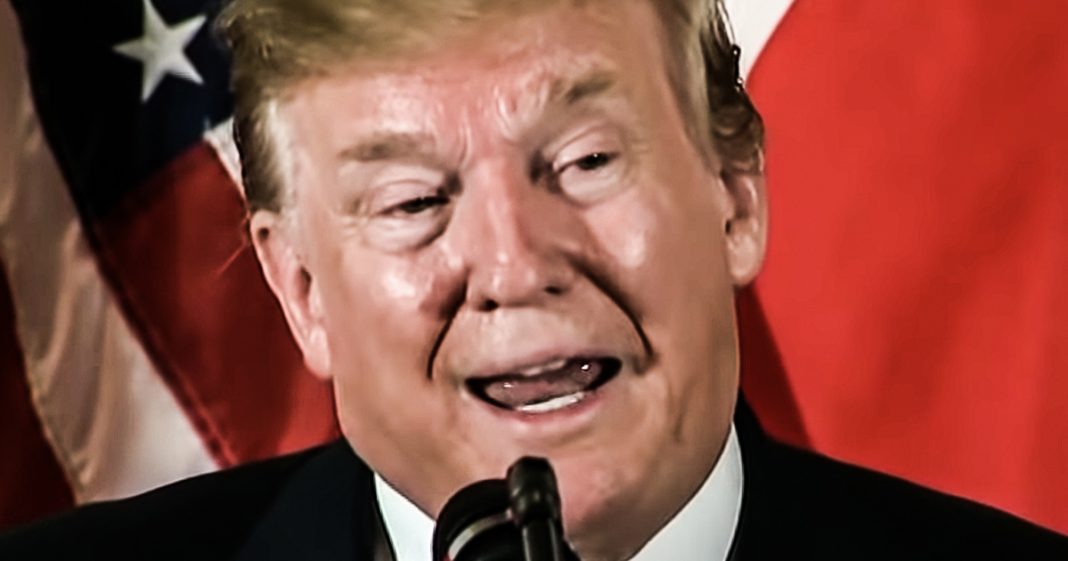 Donald Trump appears to be losing his influence over Americans, according to a new analysis by social media companies. His tweets, which are his preferred method of talking to the public, are dramatically losing their influence, with fewer and fewer engagements. Republicans believe this is because of some kind of “shadow ban” but the truth is much more simple and far less sinister – people are tired of Trump. Ring of Fire’s Farron Cousins discusses this.

According to a new analysis by a social media analytics company, Donald Trump’s tweets are having far less impact today than they were six months ago, a year ago, and even three years ago. In fact, pretty much since they started paying attention, uh, mid 2016, Donald Trump’s tweets have had fewer and fewer engagements and they’re predicting that this May, the month we’re currently in is actually going to be the lowest engagement month that Donald Trump has ever had. Now that may seem like it doesn’t really matter. Maybe this seems like a stupid story to you, but let’s not forget the Donald Trump has told us. Kellyanne Conway has told us that Trump feels this way as well, that this is his preferred means of communication to the American public. This is how he gets his message across. This is how he talks to all of us. And according to the analytics here by this group, Crowdtangle people don’t seem to care anymore.

Here are the stats here. Uh, in November, 2016, he was at a 0.55% engagement. Uh, June, 2017, he was at 0.3, 2% engagement. And as of May 25th of this month, he was at a 0.16 engagement point, 16% engagement on his tweets. Now the folks at the Toronto Star think they have a air of an ideal. Why? And it’s because nobody’s shocked anymore. You know, back in the day when Donald Trump was first running for president, and then when he became president, he would tweet stuff out. People would get shocked and angry, but now we just expect it. Now we know it’s coming.

But that’s not just the people who dislike Donald Trump. This is about his followers. The people who actually believe the things he says, there’s not a whole lot more he can say that’s gonna make them be like, Oh hell yeah. It’s kind of dying off. They’re kind of getting sick of it. The shock factor is gone. And if you don’t think that, that’s a big deal. As we head into these 2020 elections, you are sorely mistaken. If Donald Trump cannot shock people, if he cannot stand out above the crowd with his crazy rhetoric, then the man has nothing left. This is very important. It shows that the public is getting sick of him. The public is getting tired of seeing his craziness, and when you take that away from him, when the power of that diminishes as it is, he has nothing left. What’s he going to stand on his policies? What policies would that be? The policy of separating migrants from their, from their parents, and then letting them die in cages on the border. The policy of sending farmers to bankruptcies and record droves because of his trade wars, the policy of cutting taxes for the super rich, including himself, while the middle class continues to struggle in sink further down the economic ladder, those aren’t exactly policies that he should be touting.

He’s gonna try. He’s absolutely going to try, but it’s going to ring hollow among the American electorate if these people are sick of him, if they are indeed tired of seeing his stupid tweets, if they are no longer shocked by them to anger, outrage or support than that, and that alone could spell doom for Trump in the 2020 election. Maybe this is a fluke. Maybe it’s something that’s gonna, you know, start ticking the other way as we get closer to the election. But according to these numbers, according to the statistics and the analytics, it doesn’t appear to be that way. Ever since mid 2016 Trump’s numbers have fallen. People have stopped caring, and when they stop paying attention to the big orange buffoon in the White House, they’re going to start wondering why he’s there in the first place. And that’s not gonna end well for him. In 2020.