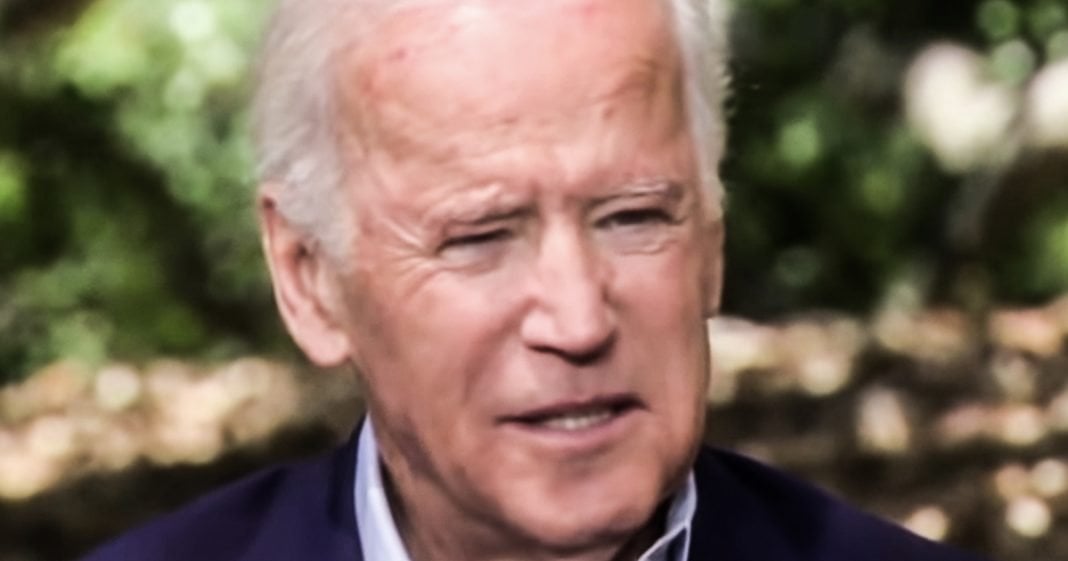 Healthcare stocks are soaring right now, and CNBC’s Jim Cramer believes that it has everything to do with Joe Biden’s recent statements about not supporting Medicare For All. And there’s a good reason to believe this. Before Biden announced his run, healthcare stocks were tanking as Democratic candidates were all promising some form of Medicare for All (with some offering half-hearted proposals, but still enough to scare health insurance companies.) Ring of Fire’s Farron Cousins explains what’s happening.

For most of this year, we have seen story after story come out showing us and telling us that stocks for healthcare companies, major pharmaceutical companies and hospital corporations have all been taking a nosedive during the Democratic primary. That is, of course, up until just a few weeks ago,

because suddenly these health insurance stocks started skyrocketing once again. And whereas people were afraid to invest in these companies, suddenly something happened that came along and made them feel good about investing in healthcare, basically putting their money into companies that are ripping off American citizens. So what in the world good at have been that made people suddenly lose all their fears about insurance companies and big Pharma and hospital corporations? Well, according to CNBCs Jim Crazy Kramer, sorry, the crazy guy who hosts mad money, uh, that thing that came along and ease their fears was Joe Biden and Joe Biden surging to the top of the Democratic field after his announcement that he was running after it was official.

Made people willing to invest in these stocks again and make a lot more money for the health care industry. Would she, why would Joe Biden do that? Well, it turns out, and Kramer verifies this. That is because Joe Biden doesn’t support Medicare for all because Joe Biden’s not gonna interrupt the health care system that we have in place today. Joe Biden likes that. Joe Biden, uh, through the affordable care act helped create it. So yeah, he’s not going to upset it or blow it up because we’re basically operating off the system that was put in place by the administration that he was a part of. He served as vice president for eight years to Barack Obama. The affordable care act is basically the only thing that’s left over from that administration that Trump hasn’t killed yet. So of course, Joe Biden’s not gonna push for a medicare for all. They only got one accomplished from a complement remaining. And that’s what he wants to keep.

And that’s why these health insurance companies, big Pharma Hospital corporations, they are celebrating right now. The fact that Joe Biden is the front runner on the democratic side because they understand that if he wins the nomination, there is no chance that their profit party that they’d been having for over a decade is going to come to an end. In fact, they’re pretty much guaranteed regardless of the outcome of the election on another four years of it, at least make no mistake. Big Pharma Hospital corporations and health insurance companies have been enjoying this massive profit party so that we’ve covered in the trial lawyer magazine since its inception.

Yeah, and they don’t ever want to come to an end and if they are out there celebrating a candidate, you can bet your life on the fact that that is not the candidate you need to be supporting right now. It blows my mind how anybody can look at Joe Biden and say, that’s my guy. It blows my mind how a guy like Joe Biden, understanding public polling that shows majority of everyone supports Medicare for all can still say, nope, I don’t support it. Like literally could be the issue that gets Republicans to come to our side and makes progressive’s happy and this moron says, no, I’m not going to support that. And yet, in order to say that you have to be a more on at this point, you really do. I make no apologies for saying that, but that’s what we’re looking at here folks. Joe Biden is good for the healthcare industry and what’s good for the healthcare industry is horrible for American consumers because as we have seen for far too long, when the health insurance industry is happy, it means they’re screwing us over royally.