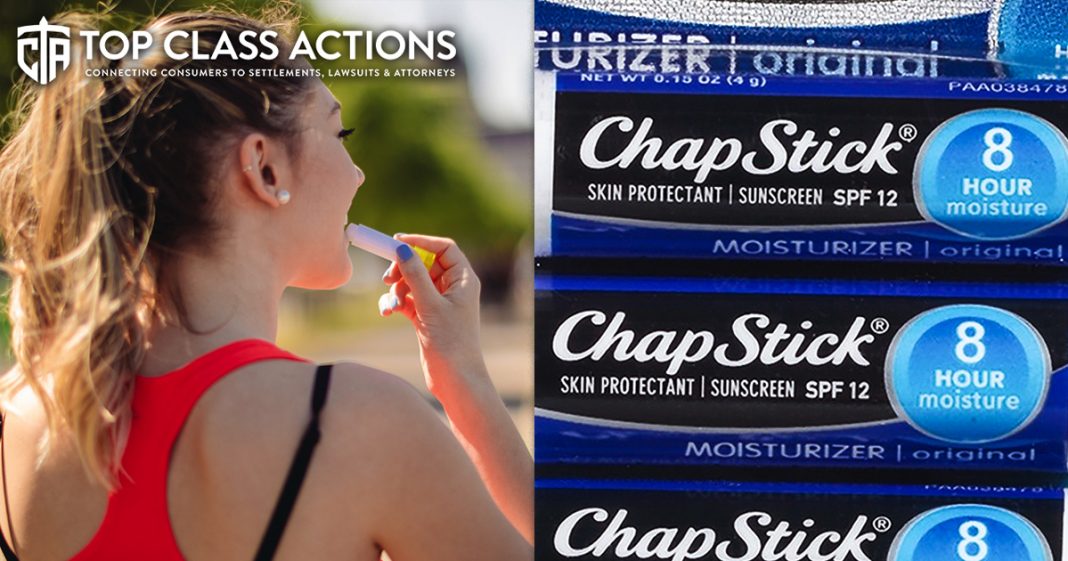 Farron Cousins:                  Well the summer travel season is right around the corner. If it hasn’t already started for you, it means a lot more people going to be hanging out outside, hanging out in the sun. And when you’re out in the sun, you obviously want to protect yourself with sunscreen or other products that provide some kind of protection from the sun. One of those products might be ChapStick, after all ChapStick is telling us in most of their products that they have SPF protection for your lips.

Scott Hardy:                          Sure. So this surprised me as I can tell it surprised a lot of our viewers, we already have more than 4,000 shares on this article and more than 440 comments. So everybody you know uses ChapStick when they’re out there in the summertime by the pool and they market a separate product where it’s not just a moisturizer but it’s ChapStick with SPF 15. And so on this package it says SPF 15 under it says eight hour protection and you actually pay a premium for this. You know, the little ChapStick tubes are usually a buck or two each, but when you’re buying the ChapStick with SPF 15 you’re paying almost $4 a tube.

So you’re paying a big price jump just to, just to buy this ChapStick to provide a little more extra protection for your lips. The issue is this labeling itself, because you have SPF 15 right above eight hours protection. Well, that’s not true. According to ChapStick themselves, you actually have eight hours of moisturizer action within the ChapStick. But if you go through the labels, you’ll find that it’s only two hours of SPF 15 protection.

So this class action is saying, hey, you can’t go ahead and have eight hour protection right over SPF 15 because everybody that looks at that thinks, I put on the ChapStick, I have my lips protected for eight hours, not knowing that they actually need to reapply their ChapStick every two hours, just like regular sunscreen and so that’s what this class action is targeting.

Farron Cousins:                  It’s really interesting to me here because we have a label that is both dishonest yet also honest. So it is telling you that yeah, you have to do this every two hours, but that’s only if you want to go through and read the fine print and I, I guarantee you nobody watching this video has ever had to go through and look at the fine print on ChapStick. You see it right there on the front. That big misleading claim, according to this lawsuit, SPF 15 eight hour protection.

You as a consumer looking at this little tube of ChapStick, typically in the checkout line at the grocery store, you’re going to assume as any reasonable consumer would that that means you have SPF 15 protection on your lips for eight hours. I don’t even see how anybody could think that that wouldn’t be the case or why they would need to go through and say, well, hold up, let me double check this and that’s exactly what ChapStick knows. That’s why they make the label in this particular manner, isn’t it?

Scott Hardy:                          Exactly, you know, the class action is alleging that that label is made so it’s intentionally misleading to consumers. You know, if you take a look at that label, you automatically think eight hours SPF 15 protection. I can toss that on there, go out on the beach, go by the pool, and I’m good all day. Nope. Just like any other sunscreen, you’ve got to go ahead and put that on every two hours to keep your lips protected. Make sure you don’t get skin cancer. And the class action is saying, you know, you need to adjust your label.

You can’t go ahead and promise all day protection and not make it clear. It’s actually dangerous to people if they think they’re protected, they get sunburn that could result in skin cancer. So this is a larger concern, other than you’re intentionally misleading consumers. We’d hoped ChapStick would come around and fix the label because if I’m spending a couple extra dollars hoping that my lips are protected, I, you know, I’d like them to actually be protected or be educated that I’ve got to work a little, do put a little extra effort so I don’t get sunburned.

Farron Cousins:                  It seems like the real irony here too though, is that if ChapStick is trying to convince people, hey, you only have to put it on once every eight hours. Wouldn’t they, in theory, excuse me, at that point, be selling less product? Because you’re, you’re actually missing three applications during that eight hour period. So if you were honest, you would probably sell more just because people would know they would need to use more and therefore it would run out faster and they would have to replenish.

I mean, ChapStick seems like they really screwed the pooch on this one because they should be telling people, hey, use this more frequently in order to get this benefit. Then you use more. We sell more. Everybody wins. You’re protected. We got your money. End of story and also, by the way, maybe we don’t get sued from it. Maybe that’s just me, but I feel like had they been honest, they, they would have already been selling more of this product.

Scott Hardy:                          Exactly. If they just went ahead and marketed it correctly. But, you know, they, they had their marketing guys that sat there and said, you know what, we can toss this eight hour thing right on top of SPF 15 and consumers will believe it. Now, we’re not directly stating that it works for eight hours. We’re, we’re kind of covered there. It’s moisturizing for eight hours. But that’s what happens.

You know, these, these companies will go ahead and run these little marketing games and then they’ll get caught and they’ll go ahead and cough up millions of dollars for the buyers of their products in a settlement and they’ll say, sorry, oops, our bad. But hopefully the consumers and our viewers here, will get paid in the end for the, you know, being allegedly intentionally misled by ChapStick.

Farron Cousins:                  Absolutely, and if this is a product that you have purchased, I advise you, follow the link in the description of this video. Get to all the information that you need right there from Top Class Actions, and while you’re on their website, make sure you subscribe to the weekly newsletter to get all of these stories and many more delivered directly to your inbox. Scott Hardy, Top Class Actions. Thank you very much for talking with us.